Human Security Report: War is getting less frequent and less deadly | World| Breaking news and perspectives from around the globe | DW | 17.12.2010

Andrew Mack is the director of a group whose new publication, the Human Security Report, finds the world getting increasingly safe. Deutsche Welle talked with him about the reasons for this surprising conclusion. 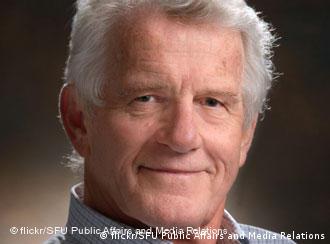 Andrew Mack is the Director of the Human Security Report Project

Andrew Mack is the Director of the Human Security Report Project (HSRP) at Canada's Simon Fraser University and a faculty member of the university's new School for International Studies. From 1998 to 2001 he was Director of the Strategic Planning Office in the Executive Office of UN Secretary-General Kofi Annan. He has taught at several universities, including the London School of Economics, and has published in numerous international newspapers and magazines.

Deutsche Welle: A lot of people's perception is that the world is getting more dangerous and violent. Your report says otherwise. Are we being hoodwinked by the media?

Andrew Mack: There are two reasons why people believe that the world is becoming more dangerous even though there has been a big decline in the number and deadliness of wars since the end of the Cold War 20 years ago.

First, media reporting tends to be driven by what might be called the, "If it bleeds, it leads" imperative. This means in practice that wars that start almost always get reported, while those that quietly peter out tend to be ignored.

Second, no international organization collects data on the number or deadliness of wars. So while we have Millennium Development Goals that track national, global and regional trends in progress in health, education, economic and environmental issues, there are no Millennium Security Goals.

Your report paints a mixed picture of the threat presented by Islamist militants. One the one hand, 4 of the 5 deadliest conflicts are Islamist in nature; on the other, support for al-Qaeda in the Muslim world is declining. Is progress being made in this area, and if so, in what sense?

There are reasons for both real concern and cautious optimism here. Four of the world's deadliest conflicts - Iraq, Afghanistan, Pakistan and Somalia - are indeed associated with Islamist political violence. But one of the reasons for the high death tolls is that they also involve, to a greater or lesser degree, major powers - primarily the US. This is significant because, since the end of World War II, the deadliest conflicts have almost always been associated with direct or indirect involvement by one of more of the major powers.

There is room for cautious optimism in that radical Islamist groups like al-Qaeda have been losing support among Muslims throughout the Islamic world for some five years. This isn't surprising. Their extremist ideology is rejected by the overwhelming majority of Muslims - including most of those who are strongly opposed to US policies in Iraq, Afghanistan and Pakistan.

The harshly repressive policies that radical Islamists have sought to impose wherever they have gained power have been deeply resented. And the targets of Islamist terror are mostly Muslim civilians. The decline in public support means that the radicals have little chance of winning popular revolutions. On the other hand no radical Islamist group has sufficiently powerful conventional military forces to defeat the armed forces of the states that they oppose.

What sort of benefits do you expect from a study that quantifies conflict in the way yours does?

Governments are increasingly demanding that their foreign and security policies be "evidence-based." Providing hard data each year on the number and deadliness of armed conflicts at the global regional and national levels helps governments - and international agencies like the UN - determine whether their policies are having an impact or not. For example, since the end of the Cold War the international community has dramatically increased the resources it puts into preventing wars, trying to stop those that can't be prevented, and preventing wars that have ended from starting again.

As the level of what might be called "international activism" has gone up the number of wars has come down. Indeed in 2008 there were 78 percent fewer high-intensity wars - those that kill 1,000 or more people year - than in 1988.

Please look into your crystal ball: will the world be a safer or more perilous place in 2020?

If current trends continue - they may not - there are reasonable grounds for believing that the world will be a safer place. First, other things being equal, we expect the past half-century trend of rising incomes in most developing countries to continue. In 2010 every region in the developing world is growing strongly. This is important because the most robust and important finding to emerge from recent quantitative research is that as national incomes rise, the risk of war declines. Its not income per se that matters, but rather that when national incomes rise governments have more resources to buy off grievances that could lead to war, to coopt political opponents and to win wars that can't be prevented.

Second, the end of the Cold War has removed a major cause of armed conflicts from the international system, while the dramatic increase in economic interdependence and in the number of democracies in the world over the past four decades has reduced the risk of international wars dramatically. In the 1950s there were six wars a year on average; in the new millennium there has been less than one.

In other words the factors that have been driving war numbers down are likely to continue - or strengthen. And there are no obvious adverse counter-trends that threaten to increase the risk of war. In the longer term the instabilities associated with climate change may cause major problems, but these are unlikely to become manifest in the next 10 years.

The Nobel Peace Prize has been awarded this year to Chinese dissident Liu Xiaobo. But guests gathered around an empty chair to congratulate the laureate, who was not represented at the ceremony. (10.12.2010)

Direct peace talks between Israelis and Palestinians have been on hold since September. While the US still hopes to bring both sides back to the table, analysts fear that another peace effort has failed. (22.11.2010)