For experts, Middle East peace efforts are all but doomed | World| Breaking news and perspectives from around the globe | DW | 22.11.2010

Direct peace talks between Israelis and Palestinians have been on hold since September. While the US still hopes to bring both sides back to the table, analysts fear that another peace effort has failed. 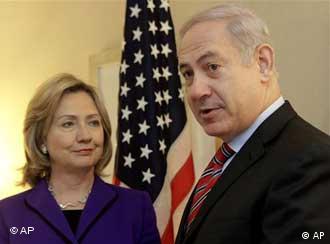 When US Secretary of State Hillary Clinton and Israeli Prime Minister Benjamin Netanjahu - after an eight-hour meeting two weeks ago - issued a terse statement promising that they "will work closely together in the coming days" to try to rejuvenate the stalled peace talks, it seemed to confirm what many experts had been arguing all along.

"There's a funeral going on, but the coffin hasn't been brought in yet," Amjad Atallah, co-director of the Middle East Task Force at the New America Foundation, told Deutsche Welle, when asked whether the current peace process between Israelis and Palestinians is dead.

And indeed, the direct peace talks between both parties which were initiated in Washington on September 1 lasted for all but three weeks. But they have now been on ice for almost two months. Talks collapsed after an Israeli building freeze ended and Palestinians vowed to resume talks only after a new construction stop was put in place. Since then, the conditions for a resumption of negotiations have only deteriorated.

In early November, Israel announced a massive new building plan only to be told by President Barack Obama that these efforts were not helpful to move the peace talks forward. Since then there have been rumors that US Middle East envoy George Mitchell was going to be replaced as well as various efforts to get the peace talks back on track via third parties. All without tangible results.

But many political observers have lost confidence in the entire mechanism.

"I think even the concept of Middle East peace process for us who have been following the last 20 years of negotiations does not make any sense anymore," Alvaro de Vasconcelos, director of the EU Institute for Security Studies, told Deutsche Welle.

"So the challenge for us right now is to ask what's different this time that would make us believe that if we put the Israelis and the Palestinians in a room together and lock the door that they would come out with a mutually agreed upon deal that didn't have international pressure or didn't have any international involvement," asks Atallah.

He believes that the Obama administration actually started out on the right track: "It started out like gangbusters," says Atallah. "It was actually going to end this. It recognized that Israel's settlement activity was a very prejudicial activity and demanded that it end."

But then, adds Atallah, "the president's team on its own decided that the pressure it was putting on Israel was unsustainable and then capitulated without getting anything in return." That switch according to Atallah puts the entire peace process at stake, because "the only reason the United States is a broker in this issue is because of the assumption that the United States can deliver Israel."

The recurring problem of this process and past negotiations lies in its gradual nature of small steps, argues Vasconcelos: "That means that a spoiler will spoil it and the spoiler can be the Israelis or the Palestinians. We have seen this time and time again."

Role to play for the EU

The lesson of the past experiences with the Middle East peace process for Vasconcelos is that "building a Palestinian state bottom-up doesn't go anywhere." 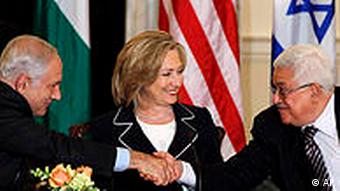 After a hopeful start, events soon took a turn for the worse

Instead, he favors a concerted effort by the international community, led by the US and supported by the EU: "To enforce a solution and create a kind of Dayton agreement for the Middle East."

His colleague Atallah is not convinced that this top-down approach will achieve better results: "The Dayton accords where not a pretty way to end the Bosnian war and right now we are facing the consequences of it."

But Atallah does believe that Europe needs to become more active to advance peace in the Middle East even if it is too late this time around. "Europe definitely has a role to play, but it's a question of to be or not to be. If Europe chooses to play only an adjunct role to the United States saying tell us what to do and we will do it, then Europe has chosen for itself not to play a role."

Germany's top diplomat flew to Israel on Sunday for a two-day visit aimed at boosting peace talks with the Palestinians and continuing Germany's support for moderate forces inside the Gaza Strip. (07.11.2010)

The mood in the West Bank darkened this week as Israeli extremists set fire to a mosque. It comes ahead of Prime Minister Benjamin Netanyahu’s potentially crucial decision on extending the settlement freeze. (05.10.2010)

Peace in sight? - Little cause for optimism in the Middle East

After the start of the first peace talks between Israelis and Palestinians in 20 months, Rainer Sollich of DW's Arab Service views the prospects for a historical agreement rather pessimistically. (03.09.2010)