How war videos on social media can trigger secondary trauma | World | Breaking news and perspectives from around the globe | DW | 09.03.2022

How war videos on social media can trigger secondary trauma

During a war, trauma is no longer limited to the battlefield. Violent and distressing content on social media can leave a lasting impression. Here's how users can be prepared. 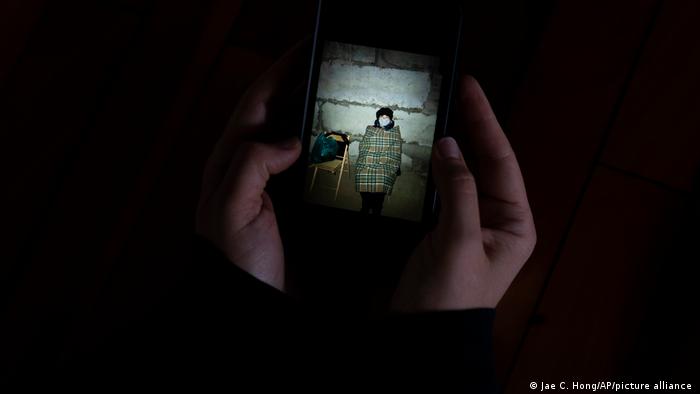 A Ukrainian immigrant in California shows a photo of her aunt hunkering down in a basement in Kyiv, Ukraine, amid Russia's invasion

A huge explosion — first a massive orange-yellow flash, then plumes of smoke rising. The location is an administrative building on the edge of Svobody Square in the eastern Ukrainian city of Kharkiv.

This scene could be watched unfiltered all over the world shortly after it happened. The video of the explosion, caused by a missile strike, as it later emerged, was shared widely on social networks. Four days later, it had been viewed several million times.

The war in Ukraine is also a digital war. The movements and reporting of journalists on the ground are limited, and access to most areas is restricted or impossible. Hence, a lot of the information coming out of Ukraine is so-called user-generated content, or eyewitness media. It is mostly raw footage posted; editorial standards do not apply.

The result is that a lot of harrowing material makes it to the screens of social media users the world over. What does this mean for people who consume content from the war in Ukraine online? How can potential psychological injury be avoided, or at least limited? How can users stay informed on the one hand, while they protect their mental health on the other hand?

Secondary trauma refers to distress or negative emotional effects that result from second-hand exposure. In other words: secondary trauma can occur when an individual hears about the first-hand trauma experiences of another person, or is exposed to gruesome or distressing material via images or videos.

In particular, repeated exposure to disturbing content carries the risk of negative consequences regarding mental well-being. If at all possible, this should be avoided.

Studying the psychological effects of exposure to distressing digital content on social media is a relatively new field of research. The same applies to the study of effective countermeasures.

"Always be prepared, avoid surprises, and be ready to view distressing material any time when moving online," said Sam Dubberley, managing director of the Digital Investigations Lab at Human Rights Watch, and co-author of a report on eyewitness media and vicarious trauma.

While Dubberley’s research has focused on secondary or vicarious trauma in the journalistic and human rights context, some of his findings can also serve as advice to ordinary social media users viewing content from the war in Ukraine.

Dubberly stresses: "Be honest to yourself. If you see something distressing that affects you, acknowledge it. Don’t brush it under the carpet or pretend it doesn’t affect you if it does."

It is important to stress that everyone is different and reactions vary to the same or similar occurrences or exposures. Furthermore, much depends on the frame of mind prevailing at the time of exposure.

Someone who expects to counter potentially disturbing material can put up their guard beforehand in order to prepare accordingly for what may come up on screen.

Furthermore, each individual has different triggers. For some, it is viewing explicit physical injuries, while for others it is the sad or desperate look of a child.

Taking one's personal situation into account is also important. Having a personal connection to an event plays a role, too. There is no particular universal technique or guideline that works for everyone in every type of setting. Nevertheless, a number of measures and activities can help limit negative consequences. 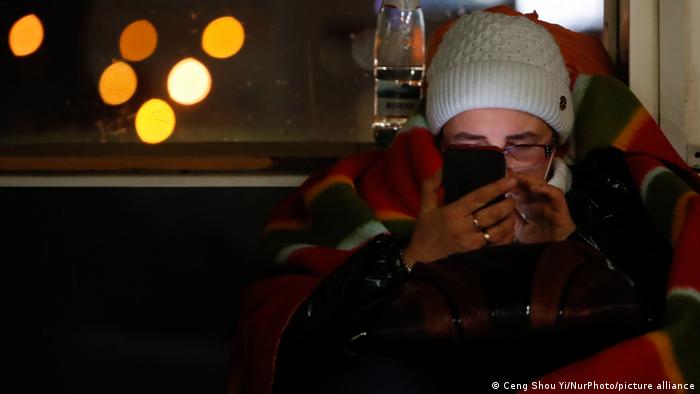 Ukrainian refugees fleeing toward Poland have shared images of their experiences

Being prepared to potentially encounter disturbing or distressing material when scrolling through a news feed is an important strategy. During a heavily-documented war, a horrific photo or video could be displayed on screen at any moment.

The power of sounds should not be underestimated, and social media users are advised to turn off the audio on their news feeds.

Research has shown that the sound of, say, a person being seriously injured or harmed, "sticks" far more to the psyche than visual material. There are many highly disturbing videos circulating online, showing people who are victims of attacks and assaults — and hearing their pain and suffering can burn itself into one's mind for a long time.

If watching videos from the war, social media users should reduce the size of the video window and disable autoplay. Turning away from the screen is always an option too.

Regular breaks away from phones and computers are advised to prevent users being exposed to a constant stream of war footage almost every waking hour. 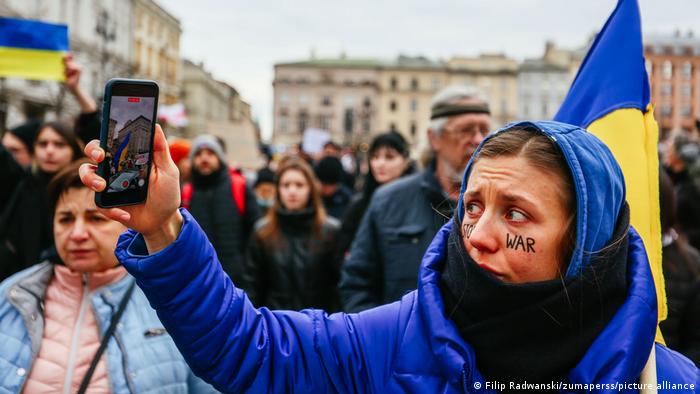 People around the world, including in Krakow, Poland, have been protesting the war

Those that do become affected, whether mentally or emotionally, are urged to look out for "unusual signs" (such as problems sleeping, frequent nightmares, excessive alcohol or drugs consumption, to name but a few) and to talk to others about their feelings. These can be family, friends or colleagues.

If these issues continue for longer periods, professional help should be sought, if you haven't already.

Wars produce a huge amount of distress and trauma, not only for Ukrainians who are directly affected. While it is important to stay informed, social media users should stay aware of possible risks that may result from exposure to disturbing digital material, wherever it is encountered.