How the Bundesliga world reacted to Bibiana Steinhaus' first game

She may have tried her best to ensure she wasn't the center of attention but Bibiana Steinhaus was the story of the Bundesliga weekend. Here's how those in the game reacted to her debut on Sunday. 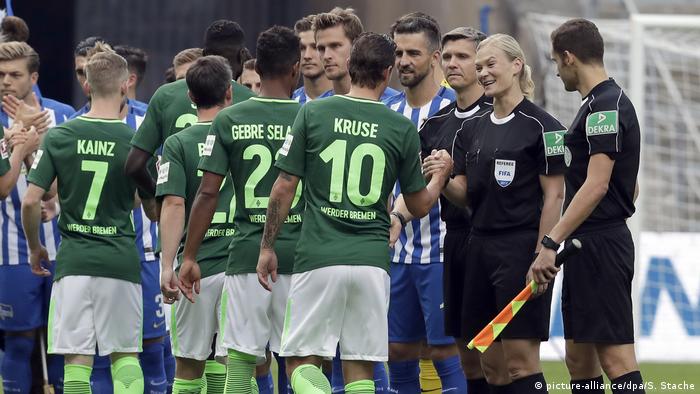 "For us, the main thing is not to be in focus at the end of the 90 minutes. We managed that and that's why we're very happy."
Steinhaus at the press conference afterwards

"I'm just relieved it's all over. I'm looking forward to tomorrow and everything returning to normal!"
Steinhaus when asked how she felt about her debut

"I just didn't read any newspapers."
Steinhaus on how she dealt with the hype around her debut

"She was under unbelievable pressure and to then make the right decision in all the key moments - that's a commanding performance."
German FA (DFB) preisdent Reinhard Grindel

How Bibiana Steinhaus overcame resistance to rise to the top

"I said before the game that it doesn't matter whether a man or a woman is referee. What matters is the performance, and that was okay today."
Werder Bremen's head coach Alexander Nouri

"Regardless of whether it's a man or a woman, the most important thing is that the referee has a strong personality. And she definitely showed that today."
Werder Bremen's Thomas Delaney

"She's been a great referee for years now and she's proved you can’t make a judgement based on gender."
Werder Bremen's Max Kruse

"I can only praise Bibiana Steinhaus, especially for the play ahead of the first goal where she played advantage. That speaks for experience. Big respect, she let a lot of the game flow even though it was a physical one."
Hertha Berlin's head coach Pal Dardai

"She did well, but that's no surprise."
Hertha Berlin's Sebastian Langkamp

"Big respect. I wouldn't have anything against more women being referees in the league."
Hertha Berlin's Vedad Ibisevic

"Even Per Skjelbred has to shut his mouth when a woman stands in front of him."
Hertha Berlin's Per Skjelbred on the yellow card Steinhaus gave him