How much longer will Lucas Hernandez be available for Bayern Munich? | Sports | German football and major international sports news | DW | 20.10.2021

How much longer will Lucas Hernandez be available for Bayern Munich?

It is possible that Bayern Munich will have to do without Lucas Hernandez for some time. The Frenchman is facing a possible prison sentence in Spain for violating a restraining order. 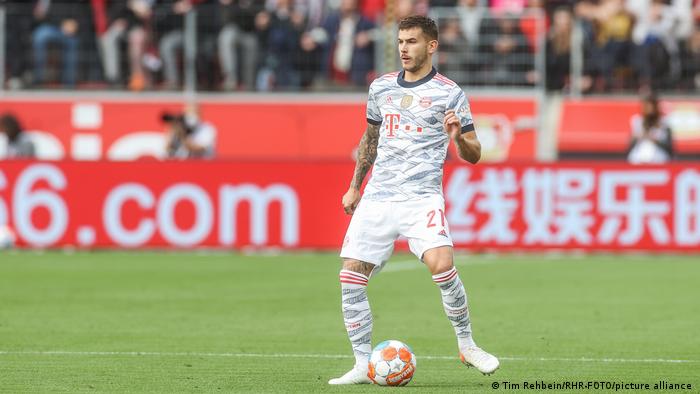 "It's a private topic, and one he should keep private," Julian Nagelsmann recently said in a television interview with German public broadcaster BR, in response to a possible prison sentence for his defender Lucas Hernandez.

Nagelsmann isn't the only one at Bayern Munich who has been cagey about the situation, but what is clear is that no one among the German champions is likely happy about the 25-year-old's "private matter."

If Hernandez's appeal in Madrid's upper regional court is unsuccessful, the footballer will have to enter into a Spanish prison by October 28 to begin serving a six-month sentence. Bayern would then have to do without Hernandez, a player who has been a regular starter under Nagelsmann, until the spring.

The French international's past has caught up with him.

Before Hernandez joined Bayern Munich in 2019 for a record €80 million, he played for Atletico Madrid for 12 years, first in the youth team before making the jump to the first team in 2014.

Both Hernandez and his then-girlfriend Amelia Llorente were convicted of domestic violence relating to an incident in 2017. Both were sentenced to 31 days of community service and ordered not to see each other for six months, staying at least 500 meters from one another.

However, four months later Hernandez was arrested at a Madrid airport with Llorente, as the pair returned from getting married in the United States. They have since had a son together. 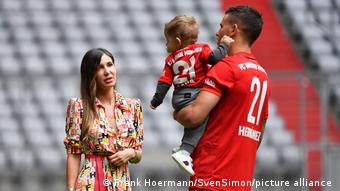 Hernandez with his wife Amelia Llorente and their son

In 2019, Hernandez was sentenced to six months in prison. Llorente avoided this because her own restraining order had not been formally served at the time of their trip.

In a similar case in Germany, Hernandez wouldn't likely be indicted for contempt of court, because he and his later wife had reconciled. In Spain however, a restraining order remains even in this instance. This is to prevent victims of domestic violence from being forced into an alleged reconciliation.

Hernandez's lawyers are trying to convert the prison sentence into a fine. Normally in Spain, prison sentences under two years are handed down as suspended sentences. The rule though, only applies for first-time offenders, which is why Lionel Messi and Cristiano Ronaldo only faced large fines for their tax evasion.

Hernandez has already been convicted of another case of domestic violence, making him a repeat offender. If his appeal is unsuccessful then the Bayern Munich defender will have to serve his sentence in Spain – a transfer to a German prison is not possible.