How Frida Kahlo's German dad influenced her as an artist

As the exhibition Frida Kahlo: Making Her Self Up opens at London's Victoria and Albert Museum, DW explores how her father, a photographer originally from Germany, helped her become an artist.

While Kahlo's legacy is deeply ingrained in Mexico's cultural history, it might come as a surprise that half of Kahlo's roots can be traced back to Germany, where her father, Guillermo, was born.

He played an enormous role in inspiring her creativity before Frida blossomed into an internationally renowned artist.

The exhibition Frida Kahlo: Making Her Self Up, which opens at the Victoria and Albert Museum in London on June 16, explores how the iconic artist built her identity through her personal belongings, such as her clothing, her cosmetics, her photos and her collected objects of art.

Among the over 200 exhibits on display, the show also includes photos taken by her father, such as an album of architectural churches.

Born in 1871 in Pforzheim, Germany, Carl Wilhelm Kahlo came to Mexico at the age of 19. When his mother died, Kahlo's father remarried; the young man didn't get along well with his stepmother. Since the family had enough money to live comfortably, Kahlo's father provided him with financial support to sail to Mexico in pursuit of new opportunities.

He never returned to his native Germany, Mexicanizing his name to Guillermo, while retaining a German accent in Spanish throughout his life. 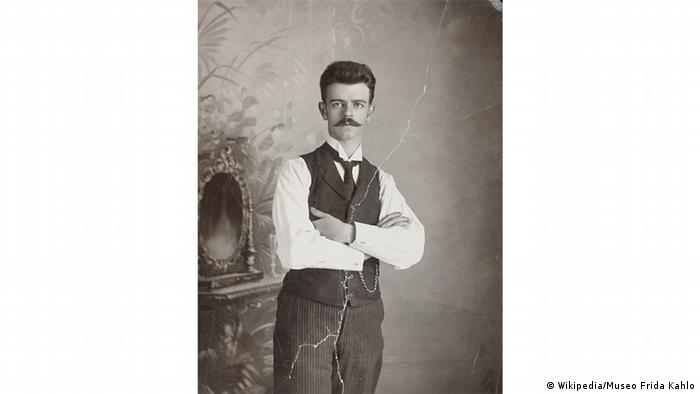 Kahlo spent the beginning of his time in Mexico working for other Germans. After the death of his first wife, he remarried to Matilde Calderón. She persuaded him to take up photography, her father's profession. Kahlo became known for his images of "landscapes, buildings, interiors," as printed on his business card.

By 1904, Kahlo had established his career, and bought land in Coyoacán, outside of Mexico City. At that time, Guillermo and Matilde had already had two daughters, and in the coming years, Frida was born in 1907.

Developing image awareness as a child

"Guillermo Kahlo established his photography studio in Mexico City in the late 1890s, and as a child [Frida] Kahlo helped him in his dark room and accompanied him on photographic assignments," Ana Baeza Ruiz, a researcher from the V&A, told DW.

"From a very young age, Kahlo learned to pose for the camera, often gazing straight at the camera with her characteristic defiance. This awareness of the onlooker, through the eye of the camera, but also of her own reflection, marks the beginning of her self-made image," points out Ruiz. "Later she shapes this image through her choice of clothing and her painting, especially in her self-portraits, both driven by her cultural and political commitments." 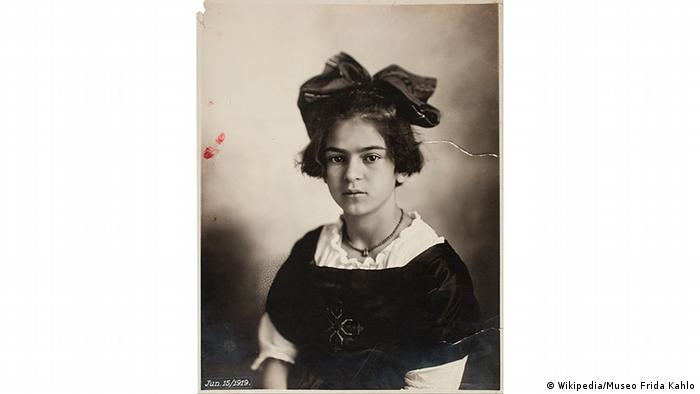 She was almost 12 years old on this picture

Evidence of Frida's developing image can be seen in a family portrait taken by Guillermo when Frida was 17, where she's seen wearing a man's suit.

"It is difficult to know exactly how Kahlo's father impacted her choice of clothing, but it was certainly unusual for a woman to dress up in men's clothes; this would have countered the fashion conventions of her time," says Ruiz. "Kahlo was not fearful of going against the grain — in fact she seems to have cherished it, and this I think she probably shared with her father. According to a later inscription in the photograph, the three-piece suit she is wearing may have been her father's."

Read more: The Guerrilla Girls' fight against discrimination in the art world

According to historians, Frida was Guillermo's favorite child as both father and daughter had suffered from debilitating health conditions. Guillermo cared for Frida during her two particularly difficult periods of convalescence.

At the age of six, Frida contracted polio which left one of her legs smaller than the other. Despite the circumstances, Guillermo encouraged her to stay active and engage in sports.

Later when Frida was 18, a streetcar accident left her with spinal column and clavicle wounds, and lacerations in her hip and pelvis. Frida was bedridden for months, and the emotional and physical repercussions endured throughout her life. Guillermo persuaded Frida to paint, and she channeled her days of recovery into creativity.

In turn, Frida took care of her father when he had epileptic seizures. The periods of ordeal strengthened their bond.

Her self-portraits alongside his photos

Guillermo's impact on Frida's artistic vision is also highlighted through the V&A exhibition.

For example, in one unfinished drawing, Kahlo has sketched the silhouette of three versions of herself, and the self-portraits are based on three photographs, with at least two of them taken by Guillermo Kahlo between 1913 and 1926. "Kahlo captures here the transition from childhood to early youth, showing her fascination with her self-made image, but she is also tracing her relationship with the camera, her father, and the viewer," says Ruiz. The photographs are shown alongside the drawing, allowing visitors to observe this directly for themselves.

Perhaps the ultimate expression of Frida's affection for her father is the painting Portrait of my Father. Frida painted Guillermo, 10 years after his death, with his camera, "emphasizing his trade as both intellectual and technical labor," says Ruiz. His glance is sideways and his appearance, handsome.

In the Ex-Voto's inscription at the bottom, Frida describes his nature as "generous, intelligent and polite," a glowing tribute to his lasting impression on her.

Frida Kahlo: Making Her Self Up runs at the Victoria and Albert Museum in London from June 16 to November 4, 2018.

Art collector Peggy Guggenheim, known for supporting the careers of some of modern art's biggest names —  Picasso, Miro, Pollock — made her home in Venice after the war. A look at her Venetian debut, 70 years on. (25.05.2018)

The artist's family has threatened to take legal action against the toy company over the right to use Kahlo's image in its new Barbie series. They say the doll does not accurately represent the Mexican legend. (09.03.2018)

A painting by Frida Kahlo depicting two nude women fetched a record sum for the iconic Mexican artist at a Christie's auction in New York. (13.05.2016)

Highlights from the exhibition Frida Kahlo: Making Her Self Up

With Frida Kahlo: Making Her Self Up, London's Victoria and Albert Museum provides insight into how the artist constructed her iconic persona. Here are a few of the items on show. (15.06.2018)