A painting by Frida Kahlo depicting two nude women fetched a record sum for the iconic Mexican artist at a Christie's auction in New York. 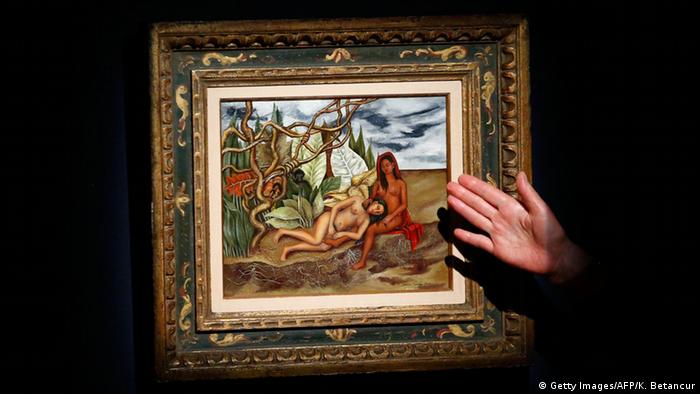 Kahlo's "Two Nudes in the Forest (The Land Itself)" depicts two nudes in a dreamlike setting. It was sold for $8 million (7 million euros) at Christie's sale of impressionist and modern art on Thursday (12.05.2016). It is the highest sum paid yet for any work by the cult Mexican artist - as well as a record for any Latin American artist at an auction.

However, the price barely made the low estimate. The work had been expected to sell for as much as $12 million.

Her previous record had been established 10 years ago, when her painting "Roots" sold for $5.6 million during a Sotheby's auction.

Her colorful personality and style as well as the limited number of works she produced made her one of the most sought-after Latin American artists.

The painting is slated to appear in the exposition "Paint the Revolution: Mexican Modernism, 1910-1950," which opens in October at the Philadelphia Museum of Art. The show will move on to the Palacio de Bellas Artes in Mexico City in 2017.

A total of 51 works were sold in the auction. Amedeo Modigliani's "Young Woman with Rose (Margherita)" (1916) went for $12.76 million. The top lot of the sale was an iconic painting by Claude Monet depicting his beloved water lily pond, which sold for $27 million.

Despite the high sum, the all-time auction record for another water lily painting by Monet is $80.4 million.

Frida Kahlo deeply identified herself with the Mexican Revolution, which began in 1910. A century later, Berlin's Martin-Gropius-Bau is devoting an unprecedented retrospective to the Mexican artist. (04.05.2010)

Why artworks are selling for over $100 million

As Modigliani's "Reclining Nude" just fetched the second-highest sum for a painting at an auction, find out why art market prices are soaring and which other artworks make up the top 10 most expensive. (10.11.2015)