How dangerous are Austria′s far-right hipsters? | Europe | News and current affairs from around the continent | DW | 28.08.2018

The Identitarian movement is picking up speed around Europe. In Austria, the group's branch is seen as the "hipster right." What's behind its success? Morgan Meaker reports from Vienna. 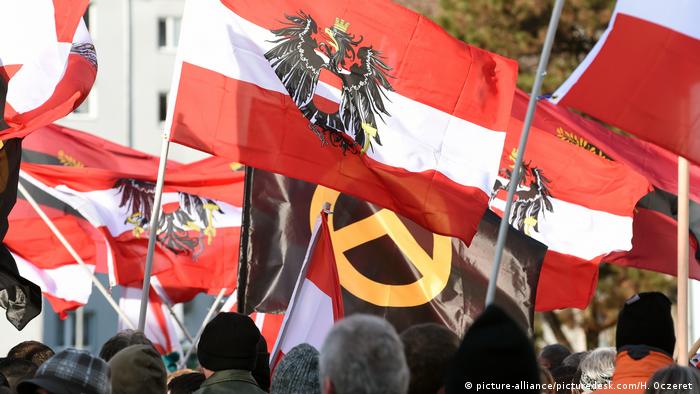 It was the middle of the night when a group of young Austrians used a crane to dress Vienna's 20-meter (65-foot) statue of Empress Maria Theresa in a niqab. The stunt was accompanied by a poster that read "Islamization? No thanks!"

The act was committed by the Austrian branch of the Identitarian movement, branded Europe's "hipster right." Identitarians are the new, media-friendly face of far-right nationalism and Europe's answer to the US's alt-right. But where the alt-right has succeeded online, Austria's Identitarians use the internet to promote their actions on the streets — imitating the tactics of leftist activist groups such as Greenpeace and generating news headlines in the process.

Unfurling giant banners and spraying bottles of fake blood, the group has scaled the roof of the Greens' party headquarters in Graz, southern Austria, and stormed a theater production performed by refugees in Vienna, handing out leaflets that read "multiculturalism kills." Most notoriously, the Austrian Identitarians' 29-year-old co-leader, Martin Sellner, helped charter a ship to "defend Europe," trying to stop migrants crossing the Mediterranean from Libya. 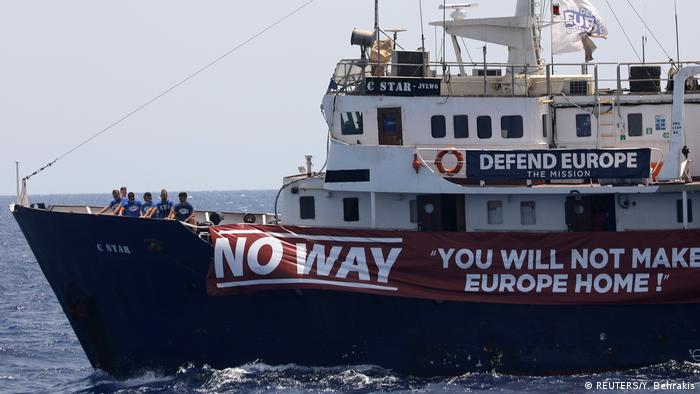 Last month, a court in Graz acquitted 17 members and supporters of the group on charges of forming a criminal organization and inciting hatred against Turkish and Muslim people.

The court's decision is likely to embolden the Identitarians or "Die Identitäre Bewegung."

They insist their tactics are not racist. But their concerns echo other far-right protest movements, including Germany's PEGIDA. They advocate for a homogenous (white) Europe, believe the continent is being turned into an "Islamic country" and spread the "great replacement" conspiracy theory — the idea that white Europeans will be replaced by people from the Middle East and Africa through immigration. The theory is based on inflated statistics and un-substantiated demographic projections. Right now, only 4 percent of the European Union is made up of non-EU nationals.

The Identitarians are a pan-European movement that began in France in 2003. But recently, its Austrian branch has become the bloc's most visible.

To Farid Hafez, a political scientist at Salzburg University, the Identitarians are a "modernized form of racist ideology."

In order to shrug off this racist tag and distance themselves from the traditional far-right, the youth group have created a new vocabulary. Martin Sellner doesn't identify as a nationalist, instead he says he's a "patriot." Their campaign for "ethnopluralism" is in fact a demand that different ethnicities live separately; encouraging segregation in order to preserve "European identity." Their idea for "re-migration" translates to restricting religious freedom to the point where where Muslims feel forced to return to their countries of origin.

In other words, these are old ideas dressed up in new terminology; xenophobia re-branded, so to speak.

A spokesperson for Hope not Hate — a UK-based organisation that uses research to counter racism — told DW that, "Generation Identity takes great care to present an apparently 'respectable' image and to cloak its language in apparently mild terms. Yet if you look below the gloss, the slick social media videos, and the stunts, what you find are people with deeply extreme views."

Their rise to prominence has run in tandem with Austrian politics' lurch to the right. In December 2017, the far-right Freedom Party came to power in a coalition government with the conservative People's Party. Since then, the government has proposed cutting welfare payments for foreigners and making it harder for refugees to become citizens.

Since 90,000 people applied for asylum in Austria in 2015, public opinion has shifted too, stoked by this new political climate. Although the number of newcomers has rapidly decreased — only 17,000 applications were filed between January and August 2017 — far-right parties continue to exploit anxieties about open borders. When the Freedom Party first entered a coalition government in 2000, more than 100,000 protesters gathered in Vienna's Heldenplatz. The demonstration against their second spell in government was distinctly muted in comparison with just 5,000 attendees.

As far-right views have become more mainstream, a 2017 survey by the Bertelsmann Foundation found that more than one quarter of non-Muslim Austrians would not want a Muslim neighbor.

Independent journalist Emran Feroz grew up in Austria to Afghan parents. Over the past few years he has noticed racism, anti-refugee views and Islamophobia increase dramatically. "It has become more acceptable to say racist things," said Feroz, who writes for the New York Times.

"Thanks to the rise of the Freedom party, racism and hatred have become something normal," he told DW.

It is this political atmosphere in which Austria's small but active group of Identitarians have found new momentum. The current government legitimizes their views via unofficial alliances. Several Freedom Party representatives have been linked to the group and have been seen taking part in rallies or protest actions.

Sellner's Identitarians have also been well integrated into an increasingly unified global network of far-right populists. His speeches have been read out by the UK's Tommy Robinson and he has spoken at PEGIDA events in Dresden. Journalist Feroz believes the Identitarians represent a part of society that now feels that "it's their time again."

But Manes Weisskircher, political scientist at TU Dresden, told DW it is important not to inflate the Identitarians' status. "[They] are not in a position to influence contemporary politics, but they reflect some of its most important developments — the salience of the issues of immigration and integration, especially of Muslims."