Pop and rock stars like Prince, The Beatles and Pink Floyd are not only famous for their music, but also for their album covers. A Berlin exhibition is showing the most iconic record art.

Prince: Naked on a throne of flowers. Rage Against the Machine: a monk in flames on the street. Nirvana: a baby swimming toward a dollar bill. The Beatles: four men walking across the street. Sex Pistols: a bright yellow cover with a pink banner. Pink Floyd: a prism and a black background.

Every pop and rock fan who collects records will have at least one of these albums on their shelf. You just need to glance at the cover to hear the music in your head. These album covers have imprinted themselves both optically and acoustically in our collective memories. 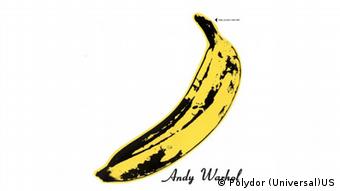 Andy Warhol designed the album "The Velvet Underground & Nico" from 1967

Album covers have always served to visualize a musician's identity. Stars have teamed up with famous artists and photographers to achieve dramatic and - most importantly - memorable results: Robert Frank and The Rolling Stones, Bernd and Hilla Becher and Kraftwerk, Herb Ritts and Madonna, Annie Leibovitz and Cindy Lauper, Nobuyoshi Araki and Björk, Jeff Wall and Iggy Pop, Anton Corbijn and U2, Weegee and George Michael, to name a few.

Even artists like Andy Warhol (pictured) and Robert Rauschenberg left their mark on pop music.

Measuring 31.5 by 31.5 centimeters, a record cover gave creative minds plenty of possibilities - even more if the album cover had a flap. In addition to the music, there was a lot that bands could offer their fans, from song texts to photo collages.

When the tiny CD overtook the record, the design space diminished. And now music downloads just get a thumbnail photo - if anything. The art of designing album covers has been lost over the years.

The exhibition "Total Records - Vinyl & Fotografie" at C/O Berlin brings back the iconic albums from the past decades. From December 9 through April 23, 2017, 500 album covers from the 1950s to the 2000s, representing both big stars and lesser known artists, are on display.

Click through the gallery above for five iconic album covers from the exhibition in C/O Berlin. Below, you'll find five album covers you may not have known were designed by famous artists.

Album covers not only give a first impression, they become an icon of the music they accompany. Some famous covers were designed by established artists. Which legendary photographer signed this artwork for the Scorpions? (01.07.2016)

Why Patti Smith, the poet with a punk heart, is a suitable replacement for Bob Dylan

Bob Dylan won't attend the Nobel Prize for Literature ceremony in Stockholm. Patti Smith will sing a song by the laureate instead. Here's why she's a worthy representative. (09.12.2016)

The blues was a formative influence not only for groups like the Rolling Stones but for rock and roll altogether. Here are the artists being covered on the Stones' new album. (01.12.2016)