How a Black performer became a darling of East Germany | Culture | Arts, music and lifestyle reporting from Germany | DW | 21.07.2020

How a Black performer became a darling of East Germany

Paul Robeson was an African American singer, actor and civil rights activist blacklisted by the US government. His life's story is revealed in new book. 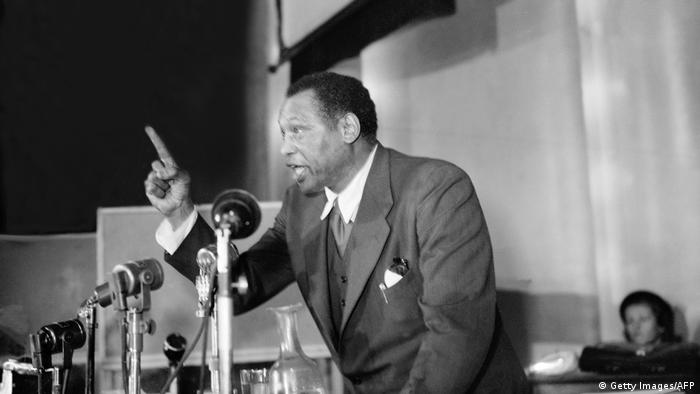 Be it in music, film, literature or even cartoons, cultural history is constantly being added to, or even rewritten. In the wake of the worldwide protests against racism following the death of the African American George Floyd in the US, people are now remembering artists long forgotten.

Paul Robeson is one such artist. The once-famous African American actor is being rediscovered, especially in Germany, where he played an unusual role later in his life.

Son of a slave

Paul Robeson was born in 1898 in the American university town of Princeton, New Jersey. As a young man, he was a professional football player before becoming one of the first African American film stars. Also celebrated on Broadway, he scored global hits as a singer. Years later, as a civil rights activist, he gained recognition for his tireless fight against racism and for equal rights. 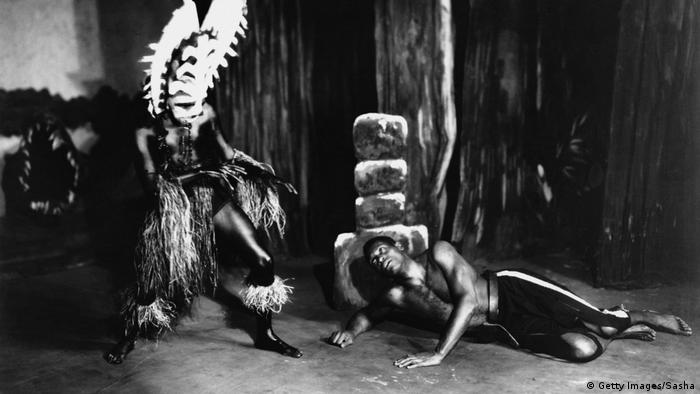 Robeson began appearing on international stages in the 1920. Here, he is seen performing a role in Eugene O'Niell's play "Kaiser Jones”

Robeson's biography is "crazy," writes film scholar Hannes Brühwiler, adding that Robeson's father was born a slave. "He was probably the biggest black film star of his time, everybody knew him, he was really known far beyond the black community," he writes. In January 2020, Brühwiler's book The Sound of Fury: Hollywoods Schwarze Liste (The Sound of Fury: Hollywood's Blacklist) was published in Germany. It takes a fresh look at the history of this cultural icon. 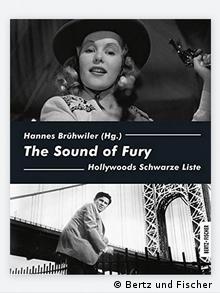 Robeson recorded and performed many African American spirituals and played a large role in popularizing them. He was also the first 20th century black actor to portray Shakespeare's Othello.

But not content to limit his life to one stage and in front of the camera, Robeson read the works of Vladimir Lenin in the original Russian, an activity that raised eyebrows in the United States.

After spending several years in London where he starred in productions of Othello and Show Boat and established himself as a concert artist, Robeson returned to the US in 1939, where he was investigated by the FBI for his pro-Soviet sentiments and involvement with various civil rights groups, including the Council on African Affairs (CAA). As he grew more active in the civil rights movement and openly sympathetic to Communist ideology, his popularity as a performer wasn't enough to shield him from the government's disapproving gaze, particularly during the height of the Cold War.

A Black Communist: in the US, a fatal combination

A victim of the US government's hatred of Communists in the 1940s and 1950s, Robeson was ostracized, shunned and banned from performing concerts and acting. In 1956, he was called before the notorious House Un-American Activities Committee (HUAC) for refusing to sign an affidavit affirming that he was not a Communist. 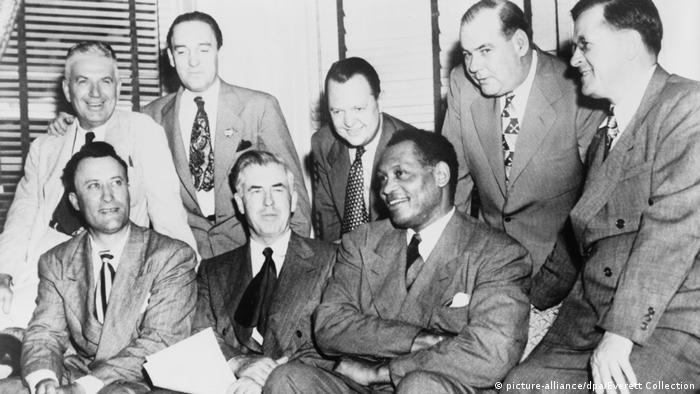 In 1948, Robeson and others founded the left-wing US Progressive Party and were active in the election campaign

Two civil rights organizations with which he was involved, the Civil Rights Congress and the Council on African Affairs, were placed on the Attorney General's list of Subversive Organizations. Robeson's passport was revoked and he was forbidden from leaving the US for eight years. While forced to stay at home, Robeson intensified his activist activities.

The star's difficulties were far from over after his appearance in front of the HUAC in 1956. Commercial radio had stopped playing his songs and his name was smeared in the media. He was also a victim of racist violence. "Shortly after [the HUAC appearance], he was attacked in Peekskill, New York by a lynch mob of 1,000 people and barely escaped with his life,” explains Brühwiler in his book. This attack was followed by many more. 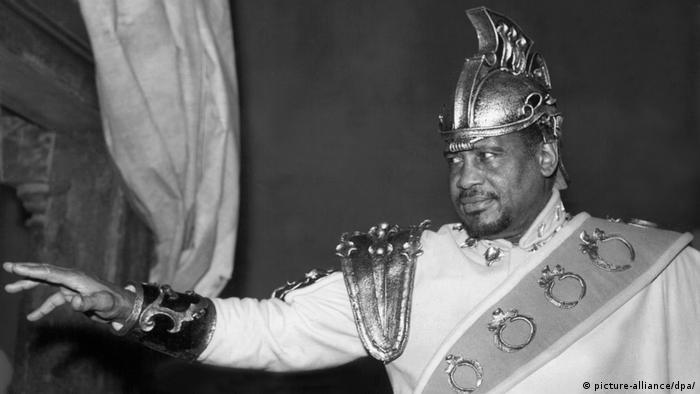 His most popular stage role was Shakespeare's Othello, which he performed in London in 1959

Paul Robeson's legacy in the context of African American racism

Although the climate of the Cold War and the communist witch hunt of the McCarthy Era took place decades ago, the political climate in the US under Donald Trump echoes the politicization of speech and opinion of those times, adds Brühwiler.

For this reason, Paul Robeson's life and struggles are indeed worthy of a fresh look. "These mechanisms with which people are silenced because they supposedly hold a different opinion are not mechanisms connected with the anti-communist sentiment of the 1940s or 1950s. They have always existed," writes the scholar. As a result, "discourse becomes impossible, one can't speak neutrally anymore. These are, of course, parallels that we experience today in the same way within the current discourse."

Brühwiler points out that a few years ago, conservative politicians like Newt Gingrich demanded, perhaps only half-ironically, that the House Un-American Activities Committee should be re-established. 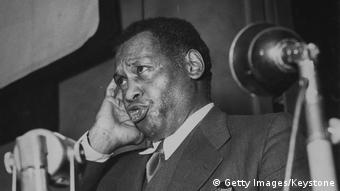 Courted by the GDR

After his passport was returned, Paul Robeson traveled to the German Democratic Republic (GDR, or East Germany) as a global ambassador against racism and for international cooperation. There he was undoubtedly also exploited by politicians and functionaries in former East Germany, who admired his praise of their political ideology and saw him as the perfect spokesperson to help the GDR align itself with the US Civil Rights movement. The star was received with great pomp by German Communist politician Walter Ulbricht in the early 1960s.

Robeson remains well-known in former East Germany even today. "As a convinced anti-capitalist and anti-racism activist, he naturally saw a different society in the GDR and the Eastern Bloc. He saw himself as a bridge-builder between these different cultures," writes Brühwiler. Robeson's work is archived in Berlin's Academy of Arts (UdK), formerly the East German Academy of Arts, where he was inducted as an affiliate member. 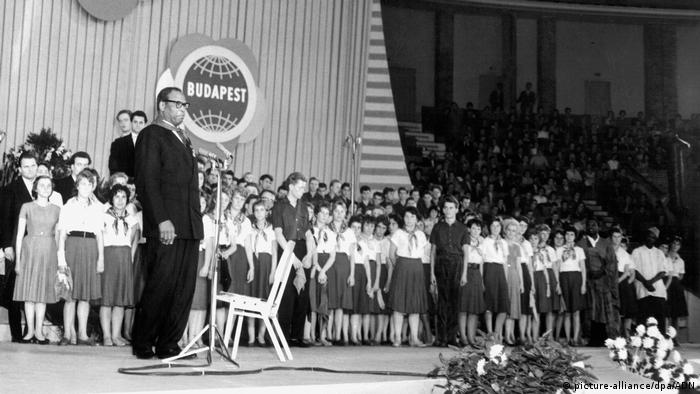 Paul Robeson traveled around former East Germany, speaking about the civil rights struggle in the US

After undergoing various medical treatments in Europe, Paul Robeson returned to the US in 1965 and died in Philadelphia in 1976 due to complications from a stroke. In the context of today's civil rights struggles and the Black Lives Matter movement, his legacy is more important than ever.