Members of Germany's electoral college elected incumbent Horst Koehler as president in a vote that could have profound implications for the general elections in September. 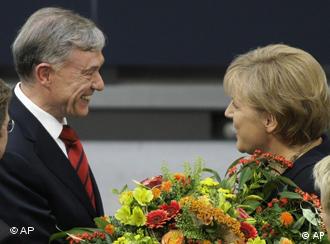 Horst Koehler, backed by Chancellor Angela Merkel's conservative Christian Democrats (CDU), was running in a close race against Gesine Schwan, who was supported by the Social Democrats (SPD).

The incumbent secured an absolute majority in the first round of voting by the 1,224-seat assembly, with 613 votes. That was exactly the number he needed to win. Schwan polled 503 votes in the secret ballot.

The president, whose new term of office begins on July 1, thanked delegates and expressed respect for his three rival candidates.

"We've got a lot of work ahead of us, but we will manage," he said in reference to the economic crisis which has badly affected Germany, along with other countries around the world.

The victory for the 66-year-old Koehler in the first round is expected to give Merkel's conservatives an important boost ahead of the September parliamentary election, where she is seeking a second four-year term. 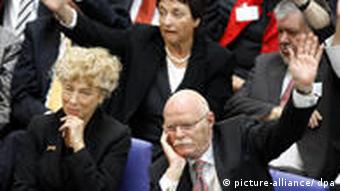 Schwan (l.) was backed by the Social Democrats

Schwan, who also ran against Koehler in the presidential election five years ago, had been stumping the country for months, wooing support from potentially wavering electoral-college members. The SPD was hoping for the backing of the Left Party and the Greens.

A political scientist and former president of the Europa University Viadrina in Frankfurt an der Oder, near the Polish border, Schwan recently stirred a national debate by saying she feared the economic crisis was creating an explosive social atmosphere in Germany.

Boon for the economy 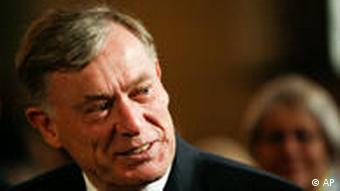 Merkel is hoping that Koehler's background will be an asset to the nation as it continues to fight its way out of the recession. An economist who once headed the International Monetary Fund (IMF), Koehler is generally a popular figure, although he has occasionally upset conservatives by criticizing big business.

Two opposition parties, the center-right Free Democratic Party (FDP) and the Bavaria-only Free Voters (FW), swung behind Koehler and the CDU, ensuring in theory that he would have a two-vote majority, though up to the last minute it wasn’t certain if all the FW voters would fall into line.

Koehler's chances of victory had improved on Friday when the leader of the hardline Left party, Lothar Bisky, had not ruled out the possibility of some of its members voting for the incumbent, even though the party was fielding a candidate of its own, actor Peter Sodann. 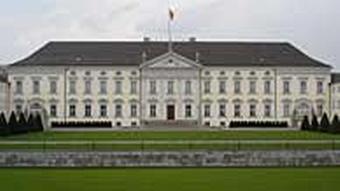 Under Germany's constitution, the head of state is chosen by a 1,224-member electoral college called the Federal Assembly. The panel comprises all 612 members of the Bundestag lower chamber and 612 public figures, a few of them sports heroes and television actors, nominated by Germany's 16 federal states.

The SPD and CDU are currently holding together a rocky coalition government, and Koehler's win could make all the difference in the looming parliamentary elections.

Germany's presidential elections are normally a sedate contest for a ceremonial post. But four months ahead of a general election, the vote on Saturday is testing allegiances between old and potential new allies. (19.05.2009)

Germany's leaders have celebrated the 60th anniversary of the country's "Basic Law." President Horst Koehler lauded the post-World War II constitution for ensuring freedom and prosperity in a democratic system. (22.05.2009)