Horn of Africa: China announces new envoy as US one departs

The region is suffering several crises, including the conflict in Ethiopia's Tigray region as well as political upheaval in Somalia. 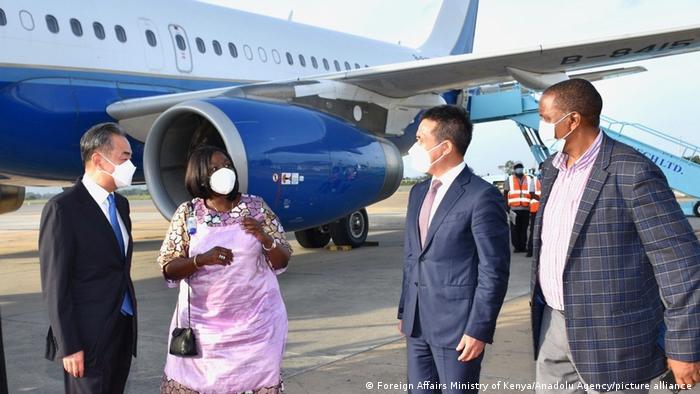 China's foreign minister was in Mombasa, Kenya to seal the deal on six agreements

China's Foreign Minister Wang Yi said Thursday while on a vist to Kenya that China would name a special envoy for the Horn of Africa.

Wang said conflicts in the Horn of Africa hamper the region's "tremendous potential for development.''

Later in the day, the US said its own envoy to the region would soon be replaced.

Why is China sending an envoy?

Speaking in Mombasa through an interpreter, Wang said China's new envoy will work "to share political consensus and to coordinate actions."

He did not provide further details on the envoy's new role. However, he did say China hoped to help Eritrea develop its Red Sea coastline.

Kenya has been involved in diplomatic efforts to bring about an end to the conflict between the Ethiopian government and the Tigray People's Liberation Front.

The conflict has resulted in the deaths of thousands of people and hundreds of thousands have been displaced. China remains opposed to sanctions.

Previously on his tour of East Africa, Wang visited Eritrea on the northern border of the Tigray region. Eritrea is aligned with the Ethiopian government of Prime Minister Abiy Ahmed in the conflict.

The region's other major war is in Somalia, where Islamist militants are battling a Western-backed government.

Wang urged nations in the region to "resolve various ethnic, religious and regional differences in an African way."

What is China's role in East Africa?

China has a naval base in Djibouti and has made loans to the Ethiopian government. China also has significant investments in the oil sector in South Sudan.

Six agreements were signed while Yang was in Kenya, including one trade agreement that will see avocados from Kenya shipped to China. Kenya will also receive 10 million COVID-19 vaccine doses from China.

Traditionally, China has focused more on business and trade in Africa over politics and diplomacy.

What is the situation with the US envoy to the region?

The US special envoy to the Horn of Africa, Jeffrey Feltman, was also in the region Thursday in the Ethiopian capital, Addis Ababa.

Feltman will step down from his role "in the coming days" after nine months on the job, the US State Department has said. US Secretary of State Antony Blinken said Feltman would continue to serve in an advisory role.

Feltman will be replaced by the outgoing US ambassador to Turkey, David Satterfield.

The State Department said it was "aware" of reports of the Chinese envoy. It reiterated that the Horn of Africa's challenges "demand sustained focus by the United States.''