World cup winner, gold medalist and generator of controversial headlines: US goalkeeper Hope Solo is a women's soccer celebrity. She spoke to DW's Maximiliane Koschyk at the One Young World Summit in Bangkok. 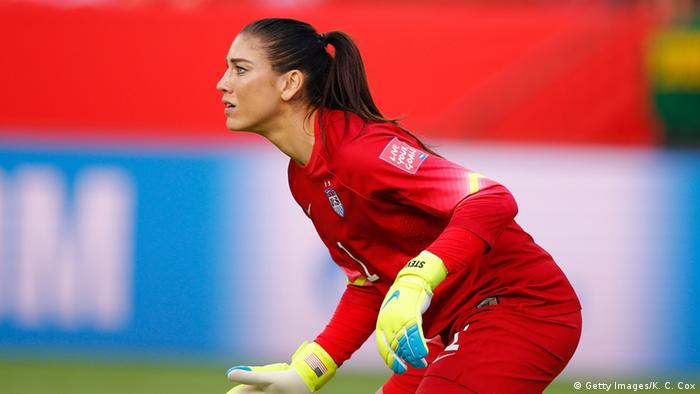 DW: How do you feel as an athlete about sports events being targeted by terrorism?

Solo: It doesn't matter where there are terror attacks. It is unfortunate for the entire world to see these attacks happen. It is scary personally that they take place in stadiums. I do think that there is a lack of security, and it is an easy target because there are so many people and in a small arena from all sorts of different teams and different religions and different races, so I think it is a very easy target, which is really scary, being an athlete myself. But it doesn't matter, where the terrorists hit – we need to end it, it needs to stop and it is going to create fear in the world until we figure out what to do about it.

In Germany soccer players are big celebrities and role models. How do you feel about the pressure that athletes are put under?

I think it is a privilege to be considered a role model, but I hate the term role model. I think role model can mean a number of different things. Every athlete is not the same, we have different interests, some are involved with entrepreneurship and activism, but others are just role models on the field. What is a role mode, who can really define that? Everybody has different personalities, different interests, but at the same time for me it is about inspiring the younger generations, especially young girls. It is about changing the world, about showing young boys, that it is okay to look up to a strong female athlete. There are so many different ways to look at it, but ultimately we are in this together to show that athletes are more than just athletes.

Do you think the popularity of the US men's team after the World Cup would push the US women's team into the shadow? 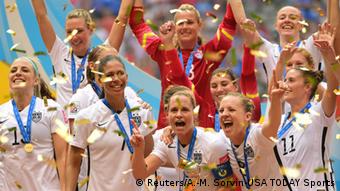 That is all relative. The US women won the world cup, the men are very often in the top 10. Americans really love getting behind the US Men's team and the US Women's team. It just shows that soccer in USA is growing and it is incredible, we all stand together. It is not the men versus the women, we are still one country trying to win championships. The men's team is more popular, they sell more tickets on a yearly basis; however, our World Cup championship game had some of the best ratings ever on Fox Sports. We had better ratings than some of the male-dominated sports sectors like NBA. But ultimately it comes down to equality issues.

Can women be more popular than men?

The experience of the German National women's team is similar: They are very successful, but less popular than their male counterparts. Do you think the female national teams should exchange more and make this more a global issue with the soccer associations?

I do believe that some of the top federations in the women's game work together. I have a great respect for Silvia Neid and the German women's team. They aren't afraid to speak out. They spoke out against playing on [artificial] turf at last summer's world cup, they spoke out along with the American team and along with a lot of other countries as well. I was very disappointed in Canada for not speaking out because they were the host nation and there is something to be said for that. I really do look up to what the Germans have done on the women's side. Trying to elevate the game of soccer, but then also speak about the side of equality issues and to really challenge Fifa to make changes. I do believe that we are all collaborating together and hopefully you will see some major changes in the next few years.

Unfortunately it wasn't always like this in Germany for women's soccer. Only 60 years ago the national federation still barred women from playing in soccer clubs, because it wasn't considered feminine. These times are gone in Germany, but in a lot of countries women are not allowed to do sports. What can successful athletes do to help them?

I am now here at this [One Young World] conference and I am learning a lot. There are a lot of world leaders here and people who are helping to empower me and give me ideas on how to change the world. I am starting to see how one person truly can make an impact. Ultimately it is about showing the world that playing sport for women does nothing but great, wonderful things: Whether that's self confidence, whether that's better education, whether that's staying out of trouble. Whatever it is, it breeds something different in young girls. I think that society needs to see that all over different countries, even here in Thailand. Thailand just qualified for the first time for the World Cup this last summer, but in their culture it is still not popular for women to play sports. They might not be looked at as feminine or they might be made fun of by the boys. So I think it is a huge cultural shift that we have to make, it is not just money and equality issues, there is a lot of different issues coming into it and we have to come together globally to make sure that we give women more opportunities.

It wasn't a shoot-out, but it was penalties that decided another Germany game in the Women's World Cup. The US overcame Silvia Neid's side with two goals in the second-half in Montreal. (01.07.2015)

As it happened: Germany vs. USA

Germany were beaten 2-0 by the United States in the World Cup semifinals in Montreal. DW's Alex Chaffer provided live coverage of the match. (30.06.2015)