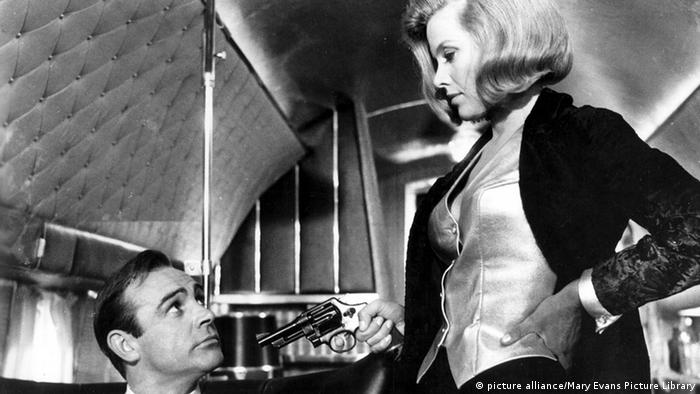 Honor Blackman, who starred as Pussy Galore in the 1964 James Bond film "Goldfinger" has died of natural causes at the age of 94 at home in Sussex in the UK, her family announced Monday.

"As well as being a much adored mother and grandmother, Honor was an actor of hugely prolific creative talent," her family said in a statement.

Before her role as a "Bond girl" alongside Sean Connery, Blackman rose to fame in the UK after starring as the character Cathy Gale in the popular 1960s TV series "The Avengers."

The London-born actress starred in dozens more film, television and stage roles in the UK and the US, including the goddess Hera in "Jason and the Argonauts" and as Laura West in the 1990s sitcom "The Upper Hand."

Some of Blackman's theater roles included productions like The Sound Of Music, My Fair Lady and Cabaret.

Joe McGann, who starred alongside Blackman in The Upper Hand, tweeted: "What a woman she was- fiercely bright, superbly funny and a wonderful actress on screen and onstage."

Blackman's family added she had "an extraordinary combination of beauty, brains and physical prowess, along with her unique voice and a dedicated work ethic."

In playing the role of Pussy Galore in Goldfinger, Blackman once said she considered the character to be a feminist, and not the average Bond girl.

"In so many of the films, the girls just looked at James and fell flat on their backs," Blackman told the magazine TV Times in 2014.

"Yet Pussy Galore was a career woman — a pilot who had her own airforce, which was very impressive. She was never a bimbo."

Agent 007 is definitely one of the most famous British fictional figures ever created. But according to some sources, he was actually born in the Ruhr valley. An exhibition in Bochum promotes the spy's German roots. (01.02.2019)

007 fans are meeting in Sölden, Austria, for a new cinematic installation about how the secret agent movies are made. The most recent Bond film, Spectre, was shot on location at the ski resort. (12.07.2018)

The actor said he cried on his last day of shooting "No Time to Die," his fifth and final Bond film. How has Craig shaped Agent 007 over the past 15 years?