The former waiter is the first person to be convicted under the controversial national security law. He isn't the only one falling foul of Hong Kong's tightened grip on civil liberties. 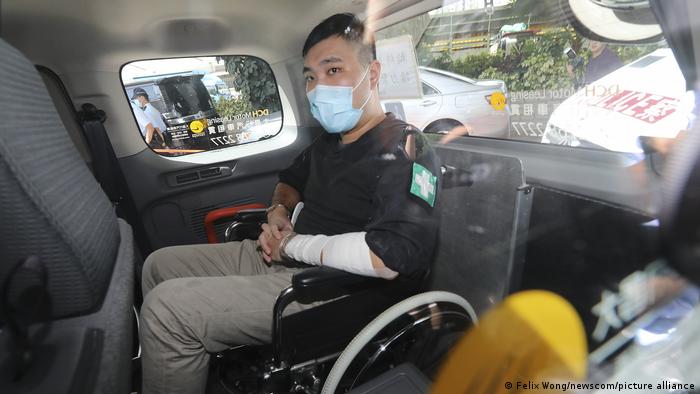 Judges in Hong Kong sentenced on Friday the first person convicted under the controversial national security law in a watershed ruling that will have long-term implications for the city's judicial landscape.

The legislation was passed as part of a prolonged government clampdown on Hong Kong's mass pro-democracy movement. But critics argue that the measure has been used to restrict civil liberties.

The 24-year-old was accused of driving his motorcycle into three riot police last year while carrying a flag with the protest slogan, "Liberate Hong Kong. Revolution of our times."

Judges decided this week that the act was "capable of inciting others to commit secession."

Meanwhile, Hong Kong police said on Friday that they are investigating another incident of dissent. They said they fielded complaints that some fans had booed China's national anthem during a public screening of an Olympic award ceremony.

Since June 2020, disrespecting China's national anthem and flag has been criminalized by law in the semi-autonomous territory.

At the subsequent medal ceremony, some fans initially booed China's national anthem and then chanted "We are Hong Kong."

"The police have launched an investigation into the incident and will collect relevant evidence," police told news agency Reuters in a statement.

A senior police source told news agency AFP that the investigation would cover "any insulting acts" toward the national anthem.

Anyone found guilty of misusing or insulting the anthem could be jailed for up to three years and fined.

A history of booing the Chinese anthem

"We are Hong Kong" is often chanted by Hong Kong football fans, many of whom revel in the city's unique identity and Cantonese culture.

It was often chanted by football fans when China's national anthem played ahead of matches.

Officials have singled out football fans as one of the reasons for passing the law banning disrespecting China's anthem and flag.

The arrests of editors and journalists, as well as the freezing of assets, led the pro-democracy tabloid to cease its operations last month. Four former executives were detained on Wednesday.