Fifteen pro-democracy demonstrators who targeted a shopping mall near the border with mainland China have been detained. Hong Kong's protest movement has increased efforts to cause economic disruption over the holidays. 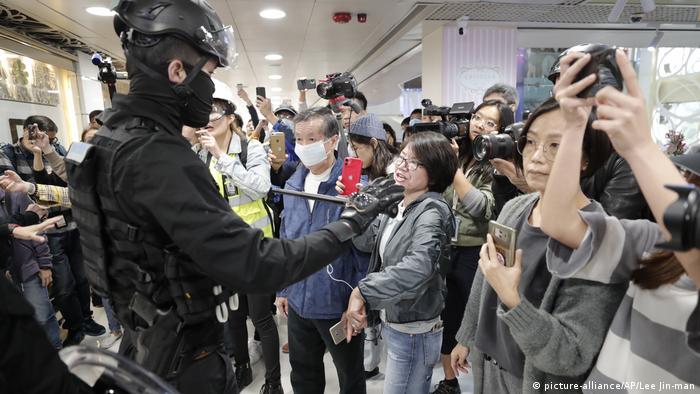 Plain-clothed police backed up by riot officers dispersed a crowd of pro-democracy protesters inside a Hong Kong shopping center on Saturday.

At least 15 people were arrested as clashes broke out inside the mall in Sheung Shui district, close to the border with mainland China.

The fighting broke out after police used batons and pepper spray to clear the mall, local media reported.

Police said on Twitter that "masked rioters" were causing a nuisance and had thrown nails into shops, disturbing public order.

A heavy riot police presence was reported around the mall and on connecting footbridges, which were partially obstructed by police.

Similar protests and clashes also took place in a mall in Kowloon Bay district, where several people were arrested later in the evening.

Demonstrators have been targeting malls across Hong Kong since earlier this week to cause economic disruption in their push for greater democratic freedoms.

The protesters have also targeted mainland tourists and shoppers, and even the so-called parallel traders who have swamped Sheung Shui in recent years.

The traders buy large volumes of duty-free goods in Hong Kong and sell them on the mainland, fueling anger among many residents who have seen their local shops transformed to cater to the visitors.

The Hong Kong protests were reignited over Christmas after a relative lull in the wake of last month's local elections that saw pro-democracy candidates win a landslide.

The rallies are part of a massive pro-democracy movement first sparked six months ago by a now-defunct bill that would have allowed extraditions to China.

They've since morphed into demands for more autonomy from Beijing and an investigation into alleged police brutality during the unrest.

More protests are planned in the next few days, including a countdown to 2020 and a march on New Year's Day, organized by the Civil Human Rights Front, that could attract thousands.

Many Hong Kongers are watching the scale of China's crackdown in Xinjiang with fear. A protest in support of the Uighurs was violently put down by riot police. (22.12.2019)

China's president has offered his support to Hong Kong's embattled leader following months of protests and violent clashes. The former British colony's economy has plunged during its worst political crisis in decades. (16.12.2019)

Beijing has accused the pop star of misconduct after he sang at a 2018 rally for a pro-democracy candidate. But Wong is a seasoned and undaunted dissident.

Former lawmakers Au Nok-hin and Leung Yiu-chung are on trial for organizing or participating in one of Hong Kong's biggest pro-democracy protests. Seven others pleaded not guilty in the same trial.