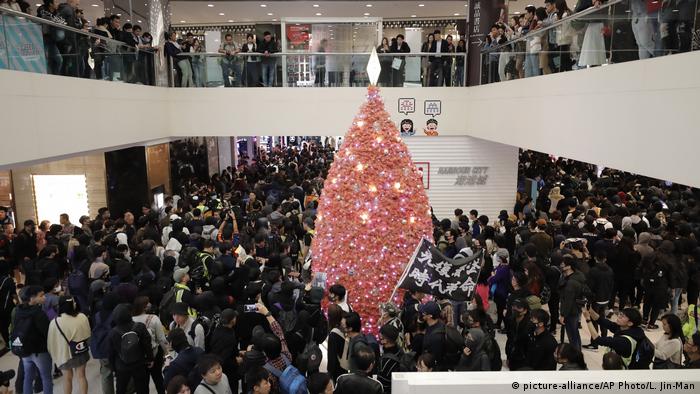 Riot police in Hong Kong fired tear gas and pepper spray at thousands of pro-democracy protesters in a mall on Tuesday evening in an attempt to disperse them.

Many protesters wore masks and reindeer horns as they chanted pro-democracy slogans in the upmarket district, which was busy with Christmas Eve shoppers.

Protesters in the mall threw umbrellas and other objects at police who responded by beating some of them with batons. One police officer pointed his gun at the crowd but did not fire.

Read more: The power of masks

Many families and children who were not involved in the protest had gathered to view Christmas lights and decorations or go shopping and were forced to flee the site.

The luxury mall is located in Tsim Sha Tsui, one of the city's busiest shopping districts. The malls have been regular protest sites in Hong Kong during anti-government demonstrations that have now gripped the city for more than six months. The last month has seen a distinct lull in protests. 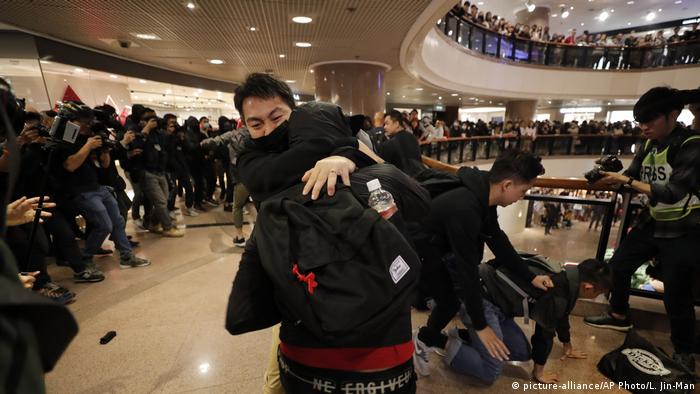 Arrests made on Christmas Eve in Hong Kong

Plainclothes police officers made multiple arrests in the mall. Flashmob rallies also formed in three other locations across Hong Kong as police attempted to disperse crowds.

Christmas Eve often sees many parts of Hong Kong pedestrianized as retailers, bars and restaurants do brisk trade, but this year police have refused to do this, fearing wider unplanned protests.

Protests began in Hong Kong in June over a controversial Chinese extradition bill, but have since expanded as protesters air wider grievances over a perceived lack of transparent democracy in the city and Beijing's control of Hong Kong governance.

A larger protest is planned for New Year's Eve. The ongoing protests have struck a blow to Hong Kong's economy, which is expected to be especially noticed during the normally busy Christmas season.