Monuments marking Beijing's 1989 crackdown on the Tiananmen protests have been cleared from two more universities in Hong Kong — a day after a sculpture commemorating the victims was dismantled. 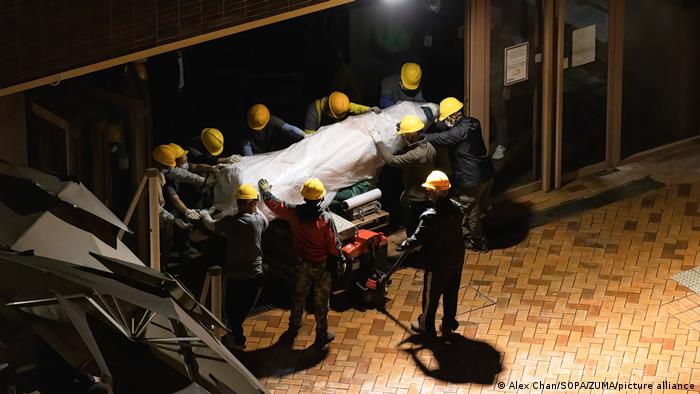 One of the sculptures removed was a 6-meter (21 foot) replica of the giant statue students had erected in Tiananmen Square by Chen Weiming.

The Lingnan University of Hong Kong took down another relief sculpture marking the Tiananmen crackdown, also created by Chen.

It was not clear whether the statues were removed at the request of Chinese authorities.

What did the artist say?

"They acted like a thief in the night. It was the opposite of being clean and above board. They were afraid of exposure and of a backlash from students and alumni," Chen told the AFP news agency.

He also said the universities acted "illegally and unreasonably."

Danish sculptor Jens Galschiot, whose "Pillar of Shame" statue was removed from a Hong Kong university on Thursday, had told DW that authorities possibly wanted to show their power to the democracy movement.

But he said his sculpture would retain its strength because of the publicity surrounding its removal.

"A lot of people all over the world are talking about what Hong Kong is doing, so they make it a symbol for how brutal the Chinese system is now," said Galschiot.

Hong Kong's Lingnan University also took down a Tiananmen massacre wall relief sculpture that included a depiction of the "Goddess of Democracy."

Until now, Hong Kong was the only place under Chinese territory where commemorations of the 1989 Tiananmen Square protests were not barred.

But Beijing's controversial security law in Hong Kong has resulted in a crackdown on democratic protests.

An annual vigil once held to mark the June 4 crackdown on Tiananmen Square protesters has not taken place for the last two years.

In September, police raided a museum commemorating Tiananmen and seized exhibits. Authorities have cited the pandemic and security concerns as reasons for their crackdown.