Tong Ying-kit, the first person to be arrested under the national security law, has pleaded not guilty of inciting secessionism. Meanwhile, there has been another arrest at pro-democracy newspaper Apple Daily. 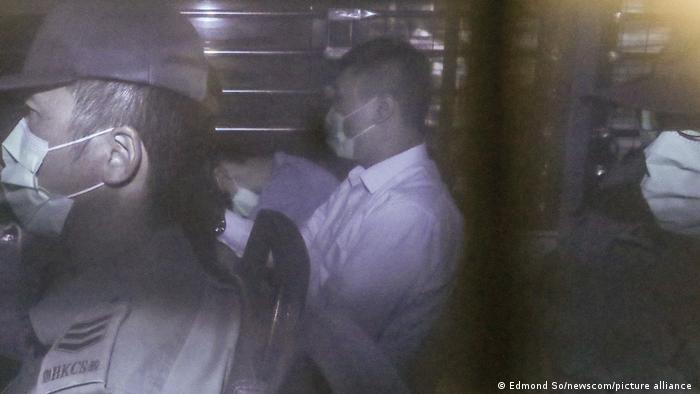 The first person to be charged under Hong Kong's controversial national security law pleaded not guilty as he stood trial on Wednesday.

Tong Ying-kit was arrested on July 1, 2020, hours after the law came into effect, for allegedly driving his motorbike into a crowd of police officers while holding a pro-Hong Kong independence flag.

The 24-year-old was refused bail and was assigned a panel of three judges rather than a jury, a staple of Hong Kong's common law practices prior to the security law.

Tong is facing charges of terrorism and inciting secession for the anti-government slogan on his flag which said "Liberate Hong Kong! Revolution of our times." The crimes of subversion, secession, terrorism and collusion with a foreign power can carry up to life sentences.

On Tuesday, the Court of Appeal upheld the decision to not try Tong with a jury, citing concerns over the safety of jurors and their families.

The refusal to offer bail also rests on the new security law that places the burden on the defendant to prove that they will not break the law if released.

Another arrest at Apple Daily

On Wednesday, police also arrested a columnist for Apple Daily, extending the scope of the operation against the pro-democracy tabloid which has said that it is considering closure.

Police announced the arrest of a 55-year-old man "on suspicion of colluding with foreign forces to endanger national security."

A senior executive at Next Digital, which publishes Apple Daily, said a lead writer for editorials and a reporter had been arrested.

However, a representative of the police told the media that there was no immediate information on a second arrest.

The security law, imposed by Beijing and its local supporters, has been the target of intense protest in Hong Kong.

Beijing cracked down against the dissent using the powers granted by the national security law to do so.

Under the new rules, imposed from Beijing after they failed to pass in Hong Kong, calling for the independence of the semi-autonomous city is illegal. Several key figures have also been detained and charged under the law.