A Berlin-based artists' collective is pressuring the German government to take in more Syrian asylum seekers. It is supported by two Berlin Jews who survived the Holocaust thanks to asylum in the UK. 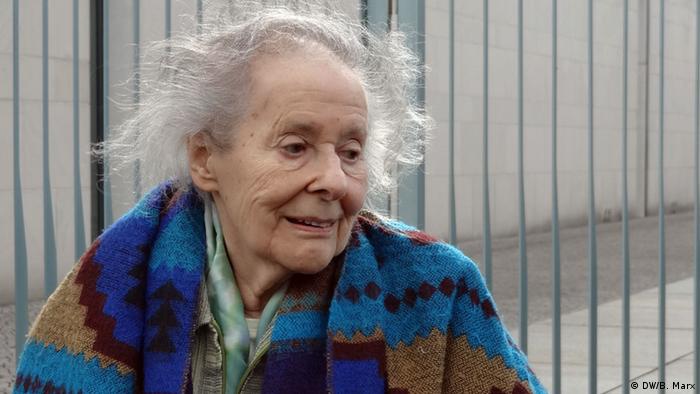 Inge Lammel (pictured) is 90 years old and lives in Berlin. Born into one of the German capital's Jewish families, she survived the Holocaust because she had the chance to move to Great Britain as a child. In 1939 Lammel's parents sent her and her sister to England, where the girls were adopted by a local family, as part of the "Kindertransport" initiative to save the Jewish children of central Europe. About 10,000 Jewish children, primarily from Germany, Austria, Czechoslovakia and Poland, were saved in this way, often becoming the only Holocaust survivors in their families. Lammel's own parents died in the Auschwitz concentration camp.

Grateful for her fate, Lammel now wants to help Syrian children escape the civil war raging in their country. Together with 87-year-old Kurt Gutmann, who moved to Scotland as a child and later returned to Germany as a soldier in the Allied forces, she visited the German chancellery on Friday (16.05.2014). Lammel uses a walking frame and Gutmann is wheelchair-bound, but as they made their way into the chancellery it was clear that behind their physical frailty are two strong minds with a strong intent. 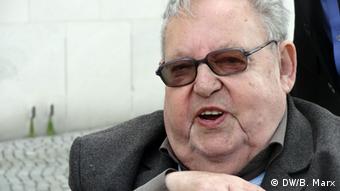 Their key message is that Germany should take in more refugees from Syria. "The only reason we survived is because we were able to leave Nazi Germany," Lammel said. "In this way we could escape the fate of our parents, who died in the gas chambers of Auschwitz."

She added that Great Britain welcomed them with open arms. This motivates her today to try to help Syrian children and families.

According to Berlin-born Gutmann, whose parents perished at the Sobibor extermination camp in Poland, Germany's national-socialist past obliges it to be generous in its refugee policy. "We would like to see Germany take in 75,000 Syrian refugees," he said.

Gutmann is grateful that the people of Great Britain gave him the chance to survive. This is why he now supports the Syrian refugees' cause. "A rich country like ours should learn from the past and make the decision to take these people in."

An artistic form of protest

The idea of targeting the German chancellery to raise awareness of the refugee problem comes from a collective of artists and human rights campaigners called the "Zentrum für politische Schönheit" (Center for Political Beauty). For the last few days, the group has been attracting attention in Berlin with unusual performances and initiatives. It has launched a website with fake reports of German Family Affairs Minister Manuela Schwesig announcing Germany's intent to take in many Syrian children - 55,000 to be adopted by German foster families. Photos of Syrian children thanking the minister with glowing faces decorate the serious-looking Internet page. 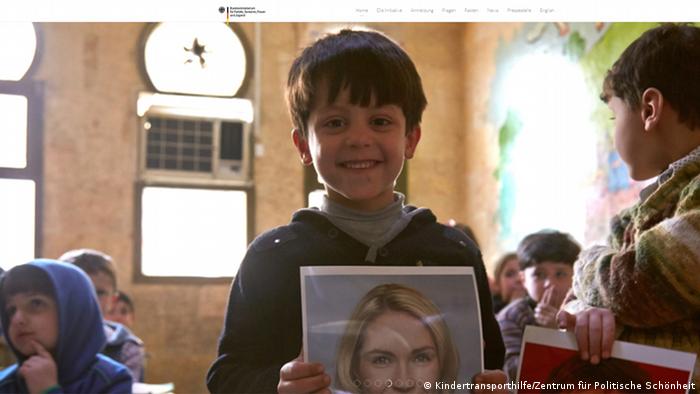 The Center for Political Beauty is drawing attention to its refugee cause in unusual ways, including a fake website

The site is a form of "hyper-reality" according to Center for Political Beauty spokesperson Zaina Lindner, who originally comes from Iraq and uses "Zaina Lindner" as her stage name. Together with like-minded activists, she has unfolded a Syrian flag in front of the chancellery to convey the meaning of the initiative. A few days ago, the artists displayed their "gratitude" in front of the building for the acceptance of Syrian child refugees.

Philipp Ruch is the Center for Political Beauty's artistic director and initiator of the Syria campaign. He said that through the various activities in front of the chancellery he wanted to shed light on reality. He believes Germany has a moral duty to take in Syrian children and families, and he is disappointed that artists need to resort to prompting the government to action.

He added that the German government has expressed its intent to accept 10,000 Syrian refugees, but there have been 76,000 applications for asylum. When Lammel and Gutmann told their stories at the chancellery, it became clear to him that their fate has a strong connection to the present. "It was a historic moment," Ruch said.

The Center for Political Beauty has announced further initiatives for the coming week.