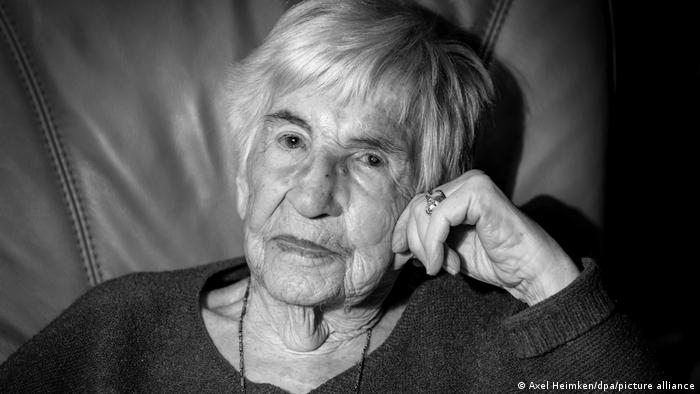 What an impressive woman! Not even 5 feet tall, she seemed to burst with more energy than a strongly built man. Like, for example, her son Joram, who accompanied Esther Bejarano during her performances. Even though she used to lean on his arm, there was never any doubt about who was in charge: Esther, of course, always knew what she wanted.

Even in her 90s, Esther Bejarano appeared on stage and sang, accompanied by the band Microphone Mafia. The Cologne-based men rapped, Joram played the bass, and Esther warbled the refrain.

In the last years of her life, her voice had lost some of its former strength that sent her around the world to perform. Bejarano accepted that and agreed to let Microphone Mafia play her songs as recordings during concerts. Besides, her performances were more about the message anyway: putting an end to racism, antisemitism and fascism. Hardly anybody else could have conveyed this message with as much passion and energy as Bejarano did. 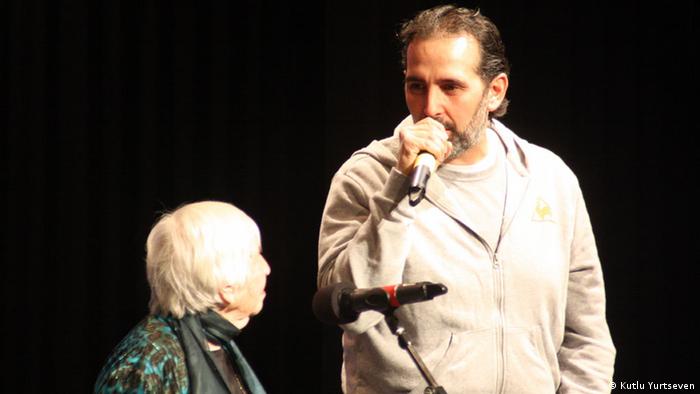 Bejarano performed on stage with Microphone Mafia into her 90s

A youth spent in concentration camps

Born in 1924 under the family name Loewy as the daughter of the chief cantor of the Jewish community in the city of Saarlouis, as a child Esther witnessed how the National Socialists seized power in Germany. The political shift impacted the course of her life.

"One's best years as a youth are those from ages 16 to 20. But what kind of a youth did we have? None, really. A horrible youth," she told DW shortly before her 90th birthday. The Nazis had all but stolen this part of her life. Harassment at school, separation from her parents, three concentration camps and a death march – Esther Bejarano had to endure all of that.

As she recounts in her book Memories, she arrived in Auschwitz together with many other people, completely exhausted after several days of travel in a cattle car. Bejarano was greeted by SS officers with the words: "Now, you filthy Jews, we will show you what it means to work."

She was forced into hard labor that consisted of carrying heavy stones. At some point, she heard that the SS was searching for girls for a camp orchestra. She was fortunate enough to be included in the group as an accordion player – even though she'd never played the instrument before. Nevertheless, the skill she had acquired playing the piano while still living at home, her musicality and her will to survive proved to be a tremendous help.

In the girls' orchestra at Auschwitz

The orchestra itself was about sheer survival: 40 young women had to perform whenever the camp's inmates marched off to work or when new trains with Jews on board arrived from all over Europe.

"You knew that they were going to be gassed, and all you could do was stand there and play," Esther Bejarano told DW in 2014. That was the very worst she had to endure in Auschwitz, she said.

Experiencing how the Nazis abused music for their own horrible purposes, however, never had a negative impact on her sense of the beauty of music. The popular songs and marches she had to play in Auschwitz, she recounted, had nothing to do with true music. She played music composed by Mozart and Beethoven in the camps without thinking about the horrible crimes committed by the Nazis.  For her, their music symbolized another way of life.

After the war, Bejarano, who had also spent time in the women's concentration camp in Ravensbrück, finally turned a childhood dream into reality: to become a singer.

She studied singing in Tel Aviv and, even during her studies, went on tour in Israel and abroad. She then met the future father of her children. Her post-war life was a happy one, she recalled. In the 1970s, however, she decided to return to Germany due to her husband's health problems.

She opted for Hamburg since the city held no particular significance for her during her childhood. At first, she told DW, she constantly wondered what the people she saw in the streets might have done during the war. "When I saw people who looked a bit older than me, I always wondered whether they had perhaps been the murderers of my parents and my sister."

But rather than buckling from the burden, she decided to fight. Her goal was to help prevent "an inhuman ideology" from spreading again, and her method was by telling her life story.

Along with Anita Lasker-Wallfisch, Bejarano was one of the few survivors of the Auschwitz girls' orchestra. Also the co-founder of the International Auschwitz Committee, she was frequently invited onto talk shows to speak about her experiences. She also spoke in many schools and proved to be a popular guest as she inspired young people with her music. 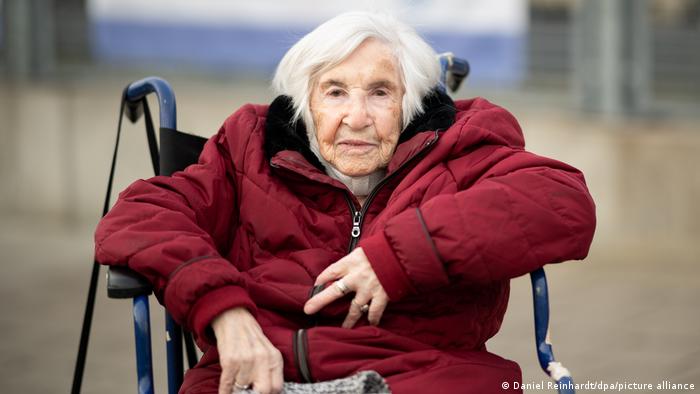 Bejarano remained strongly committed to fighting xenophobia until the end of her life, often prompting attacks and criticism from right-wing groups. She did not remain silent on the issue, however. In 2004, she caused an uproar when she reported that police had directed water cannons at a wagon on which she was standing during a protest against right-wing extremism.

In 2013, she spoke out in favor of refugees, calling police checks of Africans in Hamburg as "inhuman and unacceptable" as European asylum policy in general.

In August 2015, a Facebook user accused her in a post of "complicity in mass murder" while "letting others walk into their deaths" with her eyes wide open because she had "voluntarily joined in the founding of a camp orchestra." Bejarano reacted promptly by filing a lawsuit.

After all, she had frequently and heavy-heartedly recounted how SS officers had stood directly behind the orchestra while the girls cried and trembled during their performances. She told German public broadcaster NDR at the time that she had never before felt so utterly insulted and that the Facebook user's claim had denigrated "all those who had been in Auschwitz."

Bejarano closely followed legal trials of various Auschwitz supervisors and guards and called the public appearances of Holocaust denier Ursula Haverbeck in Detmold "an impunity." She should have been brought to justice, said Bejarano.

"Never again Auschwitz" — that avowal was a vital precondition for Bejarano's decision to return to Germany. But only hearing such statements on memorial days did not suffice for her. She saw to it that the attitude was integrated into everyday life. Esther Bejarano died peacefully early Saturday morning in an Israeli hospital. This tiny woman full of energy and spirit will leave behind a void in Germany.

This obituary has been translated from German.