Esther Bejarano, one of the last survivors of the Auschwitz concentration camp, is suing a Facebook user for making disparaging remarks. She says he mocked her by putting her in a class with Nazi officials. 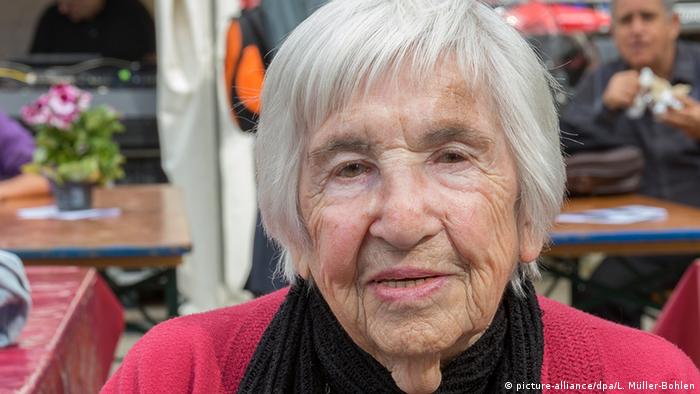 Bejarano, a Jewish artist from Hamburg who has been campaigning tirelessly to keep the memory of the horrors of the Nazi regime alive, is suing the Facebook user for libel and slander, according to a report by German public broadcaster NDR.

The man, who has not been identified, had commented on a post pertaining to a concert she attended in the central German town of Fulda on Bejarano's Facebook page. He mocked Bejarano's efforts to combat far-right extremism, calling it "the great Esther Bejarano show," according to the report.

He went on to say that "strangely, people everywhere are being sued for and convicted of being an accessory to mass murder because they collaborated with the Nazi regime. But that's exactly what this woman did, who 'sang for her life.'"

During her time in the Auschwitz Nazi concentration camp, Bejarano joined the camp's so-called "girls orchestra" to get away from the grueling work of lifting heavy stones for the Nazis.

She pretended to be able to play the accordion, which may well have saved her from death in the camp. The members of the orchestra were forced at gunpoint to play when new inmates arrived at the camp.

The Facebook user commented that 90-year-old Bejarano, who has been awarded Germany's Federal Cross of Merit, "led people to their death with one laughing eye" by "volunteering for the orchestra."

Bejarano, who learned of the defamatory comments two weeks ago, said they were "scandalous" and that it was a "disgrace that someone can post something like that on Facebook and get away with it."

"Can Nazis just get away with anything these days?," she said, adding that it was important that the man was "punished in some way."

Bejarano says the comment were not just insulting her, but "all those who were in Auschwitz."

A spokeswoman for the prosecution in Hamburg said they were "looking into the complaint." If the court decides to take on the case, the man could face up to five years in prison.

Our project takes you on a journey from 1914 until the present today - a century of turning points in Germany’s history, experienced by 12 people at a turning point in their lives. Here’s a look behind the scenes. (26.06.2014)