′Hoaxmap′ busts rumors about refugees in Germany | Germany | News and in-depth reporting from Berlin and beyond | DW | 11.02.2016

The map shows locations and provides links to sources that refute stories about crimes reportedly involving refugees. Creators say the response has been overwhelmingly positive. 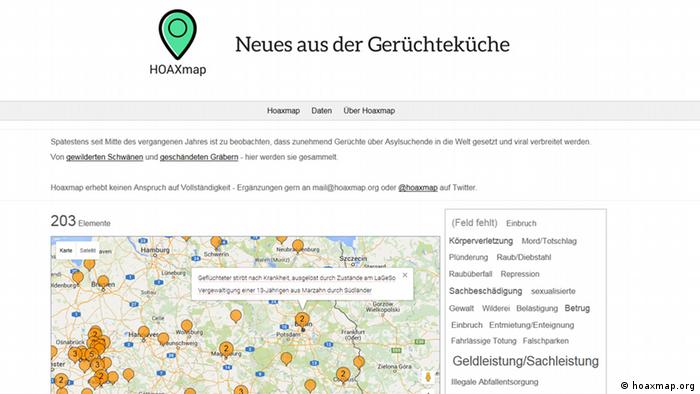 Germany is in the midst of what has been dubbed a refugee crisis and a fair number of Germans are so worried about the influx of foreigners that they fall for made-up stories. And, while right-wing violence has shot up recently, there is no evidence to suggest that the crime rate has increased because of the higher number of migrants.

Hoaxmap.org, the brainchild of Karolin Schwarz and Lutz Helm from the eastern city of Leipzig, aims to collate and refute rumors about offenses allegedly committed by migrants.

Clicking on one of the arrows marking a city or town on hoaxmap will make a link pop up to a newspaper article or other source disproving a made-up story.

This link deals with a supermarket that allegedly had to close down because of too many thefts by foreigners. Stealing is a popular hoax, as are accusations of rape and sexual harassment.

More imaginative claims include refugees being partial to swans and horses - on their dinner plates that is - and urinating on grave stones.

Hoaxmap was launched on February 8 and the response has been "overwhelming and largely positive" Schwarz told DW. "Every day, we get dozens of tip-offs via Twitter and e-mail."

"Often, individuals or groups have compiled lists with incidents in certain regions and provide us with lists," she added.

Schwarz, a consultant with a special interest in open data and data visualization, says she wanted to provide "a bit of order" among the plethora of rumors in this refugee crisis. Hence perhaps the website's ambivalent and no doubt ironic slogan "news from the rumor mill."

The project uses mainly local and other press reports to expose the hoaxes as well as the occasional police report, but Schwarz concedes that there is not enough time to verify every story individually. Both Schwarz and co-founder Lutz Helm have day jobs, too.

While there was ample praise for the project on Twitter, some argued that it is biased and does not show any examples of migrants committing offenses. Twitter user powerphil suggested that it would be better to show green arrows for stories that can be corroborated and red arrows for those that have proved to be false.

But Schwarz argues that it would defeat the purpose of the project. "Our aim is to show that there are lots of rumors, many totally absurd." But she points out that it is not just stories about refugees they are interested in, but generally, rumors about minorities, as people often use words like "North Africans," "migrants," "Southern looking" or "dark-skinned" interchangeably.

Other projects, like hoaxbuster.com in France or Austria's Mimikama, also fight the digital rumor mill, but hoaxmap.com is unique in that it focuses on a particular topic, in Germany, in the form of a map.