A rare collection of early paintings by Nazi leader Adolf Hitler have fetched more than 100,000 euros at an auction in Britain. 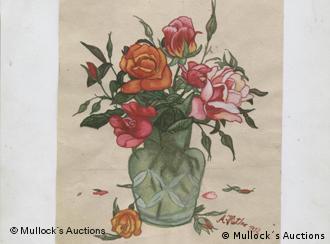 A series of watercolors, oil paintings and sketches allegedly made by a young Adolf Hitler have been sold by the auctioneers Ludlow Racecourse in Shropshire. The 13 pictures were painted between 1908 and 1914, when the Nazi leader was in his 20s and hoping to become an artist, auction specialists said. 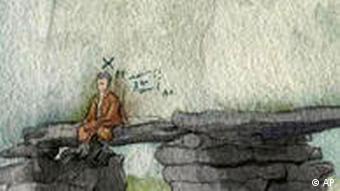 1910 self portrait of Adolf Hitler sitting on a bridge

The artworks include a self-portrait, signed with the initials A.H., which sold for 10,000 pounds, or just over 11,000 euros. Several of the other paintings – mostly landscapes – are signed A. Hitler.

Paintings discovered in a garage

The works were found by a British soldier in Essen, Germany, in 1945, who had served with the Royal Manchester Regiment. The auction house said the paintings were sold by the man to the unidentified current owner, who recently rediscovered the artworks while cleaning out his garage. 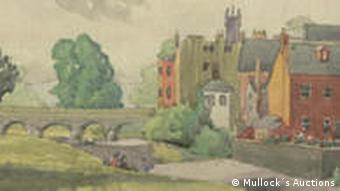 Auctioneer Richard Westwood-Brookes said the paintings "were hardly Picassos", but the sale was an opportunity to obtain original artwork by Hitler.

"Unfortunately for the world," said Westwood-Brookes, "Hitler was not accepted at the Vienna Academy, which was where he wanted to be. Had he gone there we would have known him today as an artist and not as an evil tyrant."

Paintings Attributed to Hitler to Be Sold in UK

A group of 13 paintings supposedly done by Adolf Hitler will be sold at a British auction house next month. A previous grouping of Hitler paintings, sold two years ago, fetched twice their estimated value. (27.03.2009)

A publisher's replicas of Nazi era newspapers that hit newsstands in January has sparked a national debate on press censorship. The court ruling on Wednesday lifted the ban since the 70 year old copyrights had expired. (25.03.2009)

The Austrian city of Linz is ready for a year in the limelight as one of Europe's capitals of culture. The small town is using the opportunity to face up to its past as Nazi dictator Adolf Hitler's favorite city. (01.01.2009)