Historical tensions bubble up in Crimea | World | Breaking news and perspectives from around the globe | DW | 28.02.2014

As pro-Russian and pro-Western protesters clash in the streets of the Crimean capital, Russia seems poised to intervene to show its influence in the region. But many of the tensions in Crimea are hardly new. 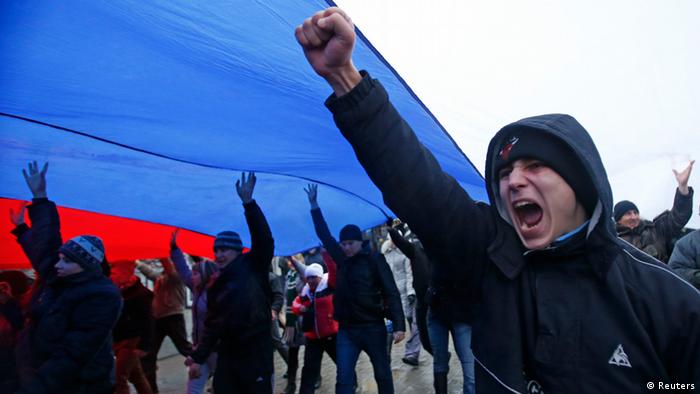 The Crimean peninsula has always been a complicated piece of territory. It has been conquered and controlled by Greeks, Tatars, the Ottoman Empire and the Russian Empire, to name only a few powers.

In the 20th century, it was part of the Soviet Union - initially in the Russian Soviet Socialist Republic and then in the Ukrainian Soviet Socialist Republic from 1954. Since then, things have hardly gotten less complicated for Crimea. After the fall of the Soviet Union, the territory remained Ukrainian despite having a majority of Russian-speakers, before being granted limited self-determination in 1995.

In the past week, Crimea's Russian-speakers have shown that their alliance to Russia is more than linguistic, however. On Wednesday (26.02.2014), the Crimean capital Simferopol saw violent clashes outside the Crimean Parliament between pro-Russian protesters and the Turkic Crimean Tatars, a local minority who support the pro-Western developments in Kyiv. On Thursday, armed gunmen occupied the government headquarters and local parliament and raised the Russian flag.

The tensions are taking place against a backdrop of surprise Russian military exercises, which began on Wednesday in western Russia - perhaps too close for comfort to Crimea. The Kremlin has also tightened security at the headquarters of Russia's Black Sea Fleet, based in the Crimean port of Sevastopol. Ukraine's Interior Minister Arsen Akakov has called Russian actions an "armed invasion" in Crimea, even as Russian officials have claimed that its forces were not involved in seizing the airports and that the military drills were planned in advance. In any case, it seems only natural that the newly established Ukrainian interim government would be worried about 150,000 Russian troops, 880 tanks and 90 planes participating in the combat-readiness drills. 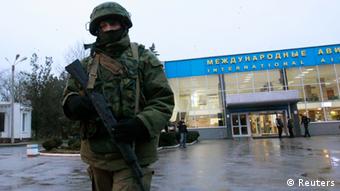 Volodymyr Panchenko, Director of the Ukrainian International Center for Policy Studies, explained that the military drills were hardly unexpected. The director of the independent think tank had predicted that there would be a new "round of pressure on Ukraine" from Russia. According to Panchenko, the aim is for Crimea to be "more or less controlled by Russian troops."

Still, Panchenko was sure that the Russian moves would not turn into "a use of force," a full-scale military takeover. Instead, "it's a show of force," he told DW.

Maria Lipman, a Russian political analyst at the Carnegie Center Moscow, agreed that the Russian military drills scheduled to run on into early March were unlikely to turn into outright military action. "I think there is good reason to suggest that the Kremlin is not actually interested in having an ongoing bloody civil conflict in Ukraine," she told DW.

No shortage of options for Russia

But Lipman didn't think the plan for military drills should be taken with a grain of salt, either. "It's not an empty warning - it is a warning, it's a serious warning," she said, before commenting on the fact that the Ukrainian Parliament had recently repealed a law that made Russian Ukraine's second official language.

She said that "the Kremlin was frustrated and that one of the earliest decisions taken by decision-makers in Kyiv was to overturn the language law." Following Parliament's action on the law, she said, "Russia wants to convey a message that some decisions cannot be taken, that there are certain things that Russia would not see happening in Ukraine. Because Russia has leverage, Russia has bargaining power." 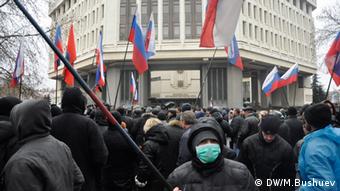 Of course, some of Russia's leverage over Ukraine is financial, as both Lipman and Panchenko agree. At the end of last year, Russia offered a $15-billion (10.8 million euro) loan to Ukraine, thereby throwing a monetary lifeline to a faltering Ukrainian economy, before putting the loan on hold after Ukraine's parliament removed pro-Russian President Viktor Yanukovych. Recent reports have suggested that Ukraine could default in the coming weeks, if there is no injection of cash soon.

But the raising of the Russian flag by protesters in Simferopol this week also showed Russia's popular leverage there - and Crimea's historically divided loyalty. Lipman agrees. "Pro-Russian sentiments in the Crimea are fairly popular and broad," she says. "There is nothing new about that. They did not emerge today. This has been true throughout post-Communist history."

The Russian majority and pro-Russian feeling in Crimea also conveniently gives Russia a reason to call on a 1999 law (link in Russian), which gives Russia a carte blanche to protect its "compatriots living abroad." The latter have the right to "depend on the Russian federations support realize their […] rights," the law states. Fittingly, there have been official declarations about the need to protect Crimean compatriots.

As if divided loyalties on the peninsula didn't complicate Crimea's case enough, there is the additional factor of the port of Sevastopol on the Crimean peninsula, which currently houses the Black Sea Fleet. Sevastopol has a special status and is separate from the Autonomous Republic of Crimea. In 2010, the Russian lease on the military base for the Black Sea Fleet was extended until 2042 by Yanukovych, thereby protecting one of the warm-water ports Russian leaders as far back as Peter the Great had been attempting to secure.

As Lipman explained, "The pro-Russian population - the majority of people who are pro-Russian, ethnic Russian and Russian speakers - is one factor. The other is the Black Sea Fleet. And this makes the Crimea a potentially very explosive place."

Indeed, even as pro-Russian protesters took over the building, the Crimean regional parliament managed to hold a session and voted to stage a referendum on "sovereignty" for Crimea. Crimea was granted administrative and territorial autonomy from Ukraine in 1995, and thus has the power to call a referendum - even if it's a referendum to secede from Ukraine.

The likelihood of a referendum is part of why ICPS's Panchenko thinks that Russia is unlikely to actively use force in the region. He said that Russia has "different instruments to create breakaway provinces without a war," explaining, "My opinion is that [the Kremlin's actions are] political and military pressure to start a referendum."

Pushing Crimea toward a referendum would certainly be one way of bringing it closer to Russia, Panchenko believes. In a referendum, he thinks that "more than 80 percent" of votes would be for secession from Ukraine. "This is not a good precedent for the other provinces," he says.

Panchenko even goes so far as to say that the clashes in Crimea this week and the separatist rattling in Ukraine's East, such as a Kharkhiv congress where local governors voted to take control of their territories, are all part of a Russian plan. "We don't have ethnic conflicts. That - in my opinion - is all organized by Russian intelligence and also by the Russian media," he said.

Lipman is more optimistic about the potential influence a referendum in the Autonomous Republic of Crimea could have. "We're not talking about black and white," she says. "There are all kinds of intermediary statuses between the Crimea being part of Ukrainian territory and Crimea seceding."

Emphasizing the special status of Crimea within Ukraine, Lipman says: "I think the formal status of the Crimea is very likely to change, but what the new arrangement will be and how they will get there - I think it is too early [to say]."

Ukraine’s interior minister has said the Russian military are blocking an airport in Crimea’s Sevastopol calling it an "armed invasion." Unidentified armed men have also been seen patrolling the Simferopol airport. (28.02.2014)

EU, US unlikely to intervene in Crimea