During the Cold War, a secret underground bunker for the West German government was constructed to protect a chosen few in case of an atomic attack. The site was initially to be sealed up, but is now planned as a museum. 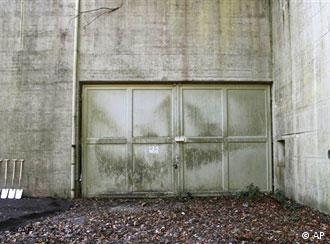 The entrance to the new Cold War bunker museum

Ron Lerke calls out a greeting and his voice echoes into the darkness -- 1.3 kilometers (0.8 miles) of it, to be exact. He is underground, in what used to be the West German government's ultra-secret atomic bunker, located deep in western Germany near the French border. And it’s here, in a tunnel stretching into a black abyss, that a restored section of the bunker will be used for the first time.

Lerke is head engineer of the project to turn the bunker into a tourist site. He walks slowly with a flashlight through the bunker, 200 meters (656 feet) underground, as danger warnings line the walls on the way to decontamination showers, sleeping quarters, a hospital, even a room set up for cutting hair.

Most of the rooms are empty and unlit, with dirt floors. In the first 100 meters, at least five massive steel doors are set into the wall, ready to slide shut in case of emergency.

This area is a tiny sliver in the 19 kilometers of subterranean passageways, but when it’s opened up as a museum in early 2008, it will offer the public what they never would have seen -- an area where a chosen 3,000 people would have holed up for 30 days after a nuclear attack.

“We call it the fortress of the nuclear age," said Florian Mausbach, president of the Federal Authority for Construction and Urban Planning who leads the project.

In the end, Mausbach says the bunker was never actually used to house government officials, who would have left West Germany’s nearby capital of Bonn to find refuge there. By the late 1990’s, after the capital had moved to Berlin, lawmakers decided to close down the structure, and started in 2001 to seal it up and bury it forever.

But the public wanted a peek inside, said Mausbach. 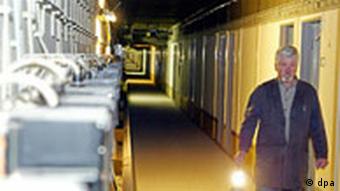 The tunnels stretch for 18 kilometers

“There's a lot of interest by the people around that area and beyond to look around in the tunnel, because it was always a secret," he said. "So I thought we should keep part of the tunnel."

Its location typifies the Cold War balance between life and destruction, added Mausbach.

After the government toyed with the idea of selling the tunnel -- some ideas were to convert it into a disco or an area to cultivate mushrooms -- Mausbach said the finance ministry agreed on the idea of a small museum, which was actually cheaper than sealing the area up forever.

Not really a secret

The museum entrance is nestled into a hill, amidst a backdrop of dense forest and vineyards overlooking the town of Ahrweiler. Down a dirt path, through a gate lined with barbed wire, is one of 38 entrances to this network of bunkers.

Markus Heibel of the Federal Office for Building and Regional Planning said that, though the existence of the bunker was meant to be a well-kept secret during the cold war and afterward, it required almost 200 local employees.

"It was not really a secret," he said. "They also knew about it in East Germany." 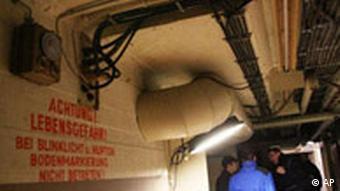 The bunker was a well-known secret

In fact, the underground labyrinth dates back to the late 19th century, when tunnels meant for moving supplies by train were built all the way into France. During World War II, concentration camp prisoners slaved away building V2 rockets in the tunnels. By 1960, West Germany began the 12-year project of turning it all into a nuclear bunker in compliance with NATO stipulations.

With all that history, locals welcome turning the bunker into a museum.

Jürgen Reiche, head of Haus der Geschichte Museum in Bonn, leads the museum side of this project. He says the bunker’s history closely parallels that of Germany -- and that restoring even some of the complex into a museum is vital to remembering Germany’s past.

Only four windows exist in the entire 19 kilometer complex. One of them is near the planned entrance to the museum, with a view no larger than a sheet of paper. It’s bombproof and can be covered by a sliding steel plate. But in 2008, it will be opened up -- for a stark look at the nuclear age.

As Reiche looks over plans for the museum, he says that the experience will lead visitors to ask the right questions about the bunker’s significance, both then and now.

A British history buff went in search of buried treasure and stumbled upon a forgotten German bunker believed to be responsible for American losses on D-Day. (03.02.2006)

The Nazis left a lasting imprint on the Berlin landscape, with ministries, airports and even bunkers in their signature bombastic style. Many of the buildings are still in use today. (08.05.2005)