Hiking initiative in Bavarian Alps aims to integrate refugees | Germany | News and in-depth reporting from Berlin and beyond | DW | 24.02.2017

A new initiative in Bavaria hopes to improve integration among newly-arrived refugees by introducing them to the "alpine" way of life. Locals volunteer as guides on the mountaineering tour. 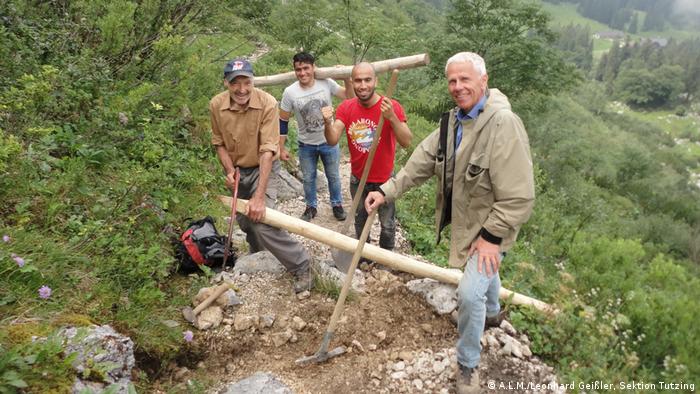 Many refugees who arrive in Germany have never seen snow in their life. A trip to the Bavarian Alps is therefore an unprecedented experience. But it's not only the snow that is new. Bavaria's alpine tradition and way of life are also very specific to the region.

The German Alpine Association (DAV) and the charity aid organization Malteser Hilfsdienst are now organizing tours to the Bavarian Alps to introduce refugees to a unique part of German culture.

The "Alpen.Leben.Menschen" project took off in mid-January, when the DAV youth hiking group "Climbären" was joined by a group of refugees from Syria and Eritrea. They went on a camping trip in Tennengebirge, a mountain range in Austria's Eastern Alps.

"The refugees are happy to get out of the shared accommodations and to step out of their dull routines," said project coordinator Anna Schober.

The project aims to give refugees the chance to make new friends and feel welcome in Germany, while also to raising awareness about nature and environmental protection. Taking care of hiking paths or planting protection forests is traditionally part of the DAV's mission.

Seminars are offered to the volunteers that work for the project. Group mentors and managers are prepped for questions about asylum law as well as intercultural communication, environment protection and mountaineering, of course.

"The project is supposed to make the arrival more easy for refugees who come to the Bavarian Alps," DAV Director Dr. Olaf Tabor said. "At the same time, we want to help them experience the local culture."

For now, the project is only taking place in the Bavarian Alps, but DAV and Malteser hope that similar cooperation will follow in other places around Germany.

It's the first time in its history that the DAV, Germany's professional organization for mountaineering with some 1.2 million members around the country, is teaming up with the Maltester Hilfsdienst. Malteser is part of a large network of charity organizations involved in refugee aid projects in more than 100 places in Germany, mainly in accommodating and providing meals at reception centers.

The integration project is funded by the German Federal Environmental Foundation (DBU) but relies in large part on voluntary help.

The chancellor said in her weekly video podcast that she would push the Tunisian prime minister to help speed up deportations. She referenced the case of the Tunisian terrorist Anis Amri. (11.02.2017)