Taliban threats did not deter Afghans from casting their votes in the second round of the presidential election. A particularly encouraging sign was the increased number of voters, especially women. 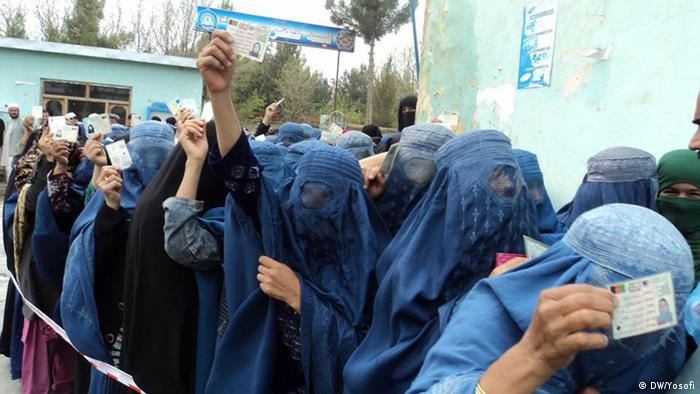 "We voted today because it was our duty," Amena told DW. She is one of the many Afghan women who defied the Taliban threat and voted in the runoff election on Saturday, June 14 to determine the successor of President Hamid Karzai who had ruled the country since 2001.

"I wanted my voice to be heard - that we will continue to fight for our rights, and by the will of God, we will win them," she said.

Outgoing president Karzai will be succeeded in early August by either his former finance minister, Ashraf Ghani Ahmadzai, or his former foreign minister, Abdullah Abdullah. The 53-year-old Abdullah, however, has a better chance of winning the runoff. He received almost 45 percent of the votes in the April 5 first round, but fell short of the 50 percent. required to win an outright majority. Ghani came in second with just under 32 percent.

In the first round, around seven million people turned out to vote, of which nearly 60 percent were men and 35 percent women. According to the the country's Independent Election Commission, around 38 percent of women participated in the electoral process this time around. 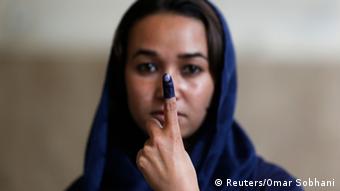 More women voted in the runoff than the first round

Fawzia Habibi, a minister, thanked President Karzai for the success of the elections and the unprecedented participation of women. Her ministry worked hard to ensure that women were informed about their democratic rights through the media.

"Afghanistan is on the path of progress and the Afghans have chosen their fate democratically. Afghan women have proven it today," Habibi told DW.

Some 400,000 security forces were deployed nationwide to secure the electoral process. General Mohammad Ayub Salangi, Senior Deputy Minister of Interior, told DW that every single soldier and police officer in the country was out in the field. "We had a security plan in place aimed designed to attacks which involved all security forces."

However, this didn't stop the militants from launching some 150 minor attacks against voters and polling stations, according to Interior Minister Umar Daudzai. During the first round of the vote in April, some 600 attacks were launched, killing 14 people injuring 100 others.

Opinion: A historic step towards democracy

Afghans have shown their longing for democratic change. The US should not commit the same mistake in Afghanistan as it did in Iraq by withdrawing hastily, says DW's Florian Weigand. (14.06.2014)

As Afghans went to the polls, presidential candidate Abdullah Abdullah told DW he hopes the international community will continue to help strengthen the country's security institutions after the drawdown. (13.06.2014)

But just as last time, voters weren't deterred by Taliban threats to disrupt the poll. In some parts of the country the turnout was so high that more than 300 voting centers ran out of ballot papers.

Furthermore, election monitors scattered across the country kept a close watch on the voting process. Many of them had been sent out by the candidates themselves. One of them, working on behalf of Ashraf Ghani, was Ehsanullah Zia. He told DW he believes the vote was success: "Although turnout in this polling station was lower than during the first round, I didn't detect any signs of electoral fraud this time around."

However, Election Commission chief Yousuf Nooristani doesn't rule out the possibility that votes may have been rigged. "Afghanistan is a young democracy and we are still in the process of learning. We hope that some years from now we won't have to talk about issues such as vote-rigging or electoral fraud anymore."

The Electoral Complaints Commission registered some 250 complaints shortly after polls closed and will continue to do so over the coming days. About 12 million Afghans were eligible to vote in this election. Preliminary results are expected on July 2 and the final result on July 22. The inauguration of the future president is set for August 2.