Israeli warplanes have brought down several high rise buildings in the Gaza Strip. The death and injury toll has continued to rise as fighting between Israel and Hamas reached its 50th day. 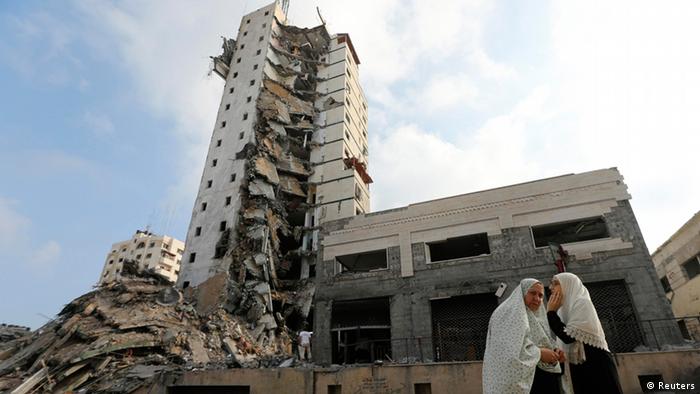 Israeli airstrikes on Tuesday leveled the Basha Tower, which had about 14 floors and housed homes and offices, and a mixed-use "Italian complex" of about the same height. Both buildings, among the tallest in the Gaza Strip, they had been evacuated after residents received messages warning them of impending strikes.

"I have become homeless, my children's fear will never be soothed, and something new has now been added to our feelings toward Israel and all the world which has been looking on without doing anything," Nael Mousa, a 38-year-old resident of the Italian complex told the AP news agency.

Medical officials reported about 20 people had been wounded in the attack on the "Italian building" - so called because it was built by an Italian businessman - and two others were killed in a separate Israeli attack.

The Israeli military confirmed it had carried out 15 airstrikes overnight, while declining to comment specifically on the high-rise attacks, of which there have been several since Saturday. In the past, targets in high-rise buildings have been hit, but the buildings themselves have been left standing.

An Israeli military spokeswoman said about eight rockets were launched into Israeli territory from the Gaza Strip, including one which damaged a home in the city of Ashkelon, injuring about a dozen people there. A rocket was also reportedly intercepted over Tel Aviv.

The fighting came as Egypt, which has been mediating between Israel and Hamas, urged the parties to resume indirect talks about a permanent ceasefire.

Egyptian authorities have put forward a deal involving a gradual easing of restrictions on movement and trade in and out of Gaza, which has been blockaded since Hamas took control in 2007.

More than 2,100 Palestinians, most of them civilians, and 68 people on the Israeli side, all but four of them soldiers, have been killed during the past seven weeks of fighting.

'This is not going to sit on the shelf'

The controversial head of the UN Gaza commission tells DW that the inquiry will go ahead even if it can’t travel to Gaza. The Canadian legal scholar also says that his country’s and Israel’s opposition don’t affect him. (25.08.2014)