The political unrest in Hong Kong hasn't only strained the political situation; it has also had a major impact on its many luxury shops. With no end to the protests in sight, shop owners are worrying about the future. 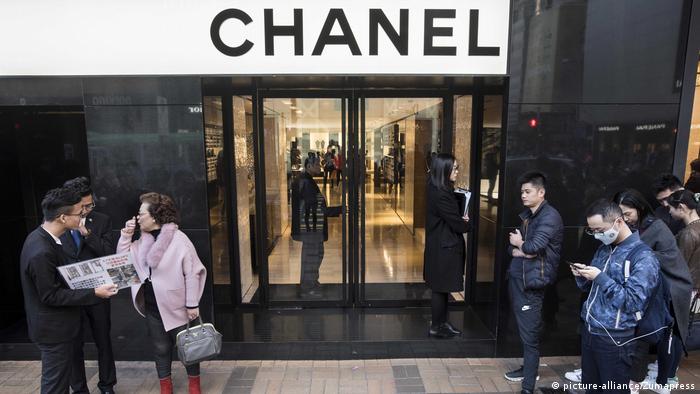 It's not long since Chow Tai Fook jewelry stores dominated the street scene along Nathan Road, a buzzing shopping district on the Kowloon side of Hong Kong. Across the harbor in Central, Prada and Louis Vuitton flagship stores jostled for position, paying hundreds of thousands of euros in rent every month for the privilege.

Each of these retail palaces was full of mainland Chinese shoppers, eager to take advantage of China's strong yuan currency and Hong Kong's tax-free status to shop up a storm.

Fast forward to Hong Kong today and months of unrest have taken much of the gloss off the luxury market. Since March, pro-democracy demonstrators have taken to the streets and there have been violent clashes with police.

Hong Kong once accounted for around 5% of global luxury sales, but that figure is now closer to 2%. Luxury sales in Hong Kong, which hit a peak of €10 billion ($11.09 billion) in 2013, are likely to drop to €6 billion in 2019, the luxury consultancy Bain said in a recent report.

Luxury brands operate around 1,000 stores in Hong Kong. France's LVMH and Italy's Prada rack up about 6% of their global sales in the territory.

"We have not been doing much luxury shopping, the atmosphere is bad. We have given a donation to the protest movement instead. The economy was slowing a bit anyway before the protests, so we might not have been spending on luxury items in any case," said shopper Celia Tam outside the Times Square mall in Causeway Bay.

Protests have weighed on sales figures from major luxury brands like Germany's Hugo Boss and France's Hermes. In the hottest months of protest, sales of premium goods in Hong Kong, such as jewelry, watches and other high-value items sank by half.

Strolling through the lobbies of top hotels like The Peninsula and the Mandarin Oriental, the visitor is always struck by the luxury watch shops. Watchmakers are feeling the pain in particular. Switzerland's Swatch Group and Cartier-owner Richemont rely on Hong Kong for 11-12% of their global sales.

Causeway Bay is one of the world's most expensive shopping streets and one of the flagship retail outlets here is the Prada store. However, the Italian fashion brand is pulling out when its lease expires in June 2020. In a bid to lure a big name replacement, the landlord is set to cut the €1 million monthly rent on the site by 44%.

Luggage maker Rimowa intended to open its 10th store in the territory in Lee Garden mall in Causeway Bay, but it is holding off on building a full outlet until the political situation becomes clearer.

"The socio-political situation in Hong Kong is significantly reshaping the market across the Asian region," wrote Claudia D'Arpizio, co-author of the Bain report.

She said political unrest has cost €2 billion in Hong Kong sales this year and that much of those sales were absorbed by Chinese spending in mainland China, South Korea and Japan, so Asia still showed growth.

Some brands are indeed seeing an increase in sales on the mainland, but luxury goods in Hong Kong are still a lot cheaper than in mainland China — in some cases, half the price. Many mainland shoppers say they browse in the malls in Beijing and Shanghai, but then do the actual buying in the malls of Hong Kong. The territory's tax-free status, plus the assurance that the goods on sale are genuine and not knockoffs, is a powerful draw.

"I don't really see the protests so much, there are areas of the city where we go to shop and we don't see any difference. We mostly see it online," said one shopper from mainland China who gave their surname as Liu.

"It's still a lot cheaper here. But I know a lot of people are going to other places like South Korea and Tokyo to buy luxury items, as they can see online how mainland Chinese are being badly treated in Hong Kong," he said.

The broader retail outlook is grim in Hong Kong and this is reflected in the high-end market. The Hong Kong Retail Management Association says over 10% of retailers in Hong Kong, which means thousands of shops, could shutter within six months, with more than 5,600 retail jobs lost.

Normally these shops are thronged with mainland Chinese shoppers, who make up 80% of tourism arrivals in Hong Kong. But they are staying away over the protests and retail sales fell by 25% in October — the steepest drop on record.

The Chinese yuan has been weakening in recent months and this is also hitting the currency's overseas spending power.

Nearly one third of those surveyed also said they would have to lay off an average 10% of employees in the next six months, while 43% of retailers said they might have to close down completely within six months.

Some luxury brands are seeing sales move elsewhere in the region. Burberry, famous for its trench coats, has 12 stores in Hong Kong, which ordinarily make up 8% of total sales, but since the protests began they now account for around 5%.

Burberry has seen a "double-digit" decline in sales in Hong Kong because of the protests, but at the same time, sales growth was strong in China, Korea and Japan — partly reflecting trade displaced from Hong Kong.

Burberry says it is not planning to close any stores, but it will be looking for rent reductions.

With no end to the protests in sight, some shop owners are worried the luxury map in Hong Kong has been completely redrawn.

Hong Kong protests: 'It doesn't matter if it's Christmas'

Anti-government protesters in Hong Kong marched through busy shopping districts and police used batons and tear gas to disperse them. A 16-year-old male fell from a restaurant in a mall after being startled by police. (25.12.2019)