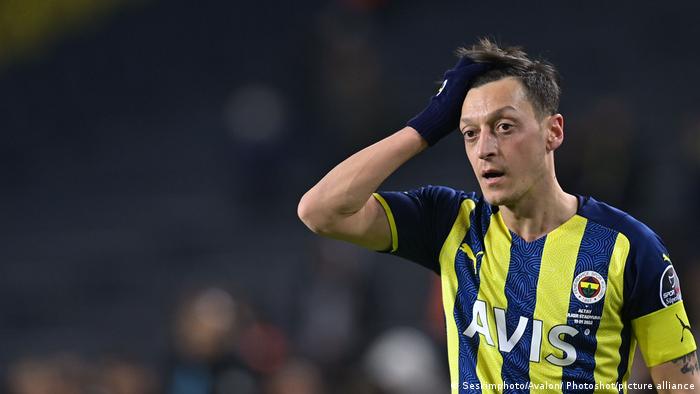 Mesut Özil has swapped Fenerbahce for Basaksehir - but is his popularity on the decline?

Little over a year ago, German World Cup winning midfielder Mesut Özil was given a hero's welcome by Fenerbahce supporters when he signed for the Istanbul side. Now, those same fans are celebrating his departure.

It's not just Özil's disappointing performances over the past 18 months which have attracted the fans' ire, but also his next destination: Fenerbahce's cross-town rivals and controversial upstarts Basaksehir, a club with close and well-documented ties to Turkish president Recep Tayyip Erdogan.

"My expectations were high, but he didn't meet them at all," says Sezgin, one of more than one million Fenerbahce fans who had tracked Özil's flight from London to Istanbul when he signed for Fenerbahce from Arsenal in January 2021.

At the time, Özil insisted he was delighted to sign for the Turkish giants, a club he said he had supported all his life given his Turkish heritage. However, the 33-year-old went to make only 37 appearances in one-and-a-half seasons at the Şükrü Saracoğlu stadium, and hasn't played at all since March this year following a row with then interim head coach Ismail Kartal. "I am happy that he is gone," says Sezgin.

Another fan, Mehmet, agrees: "Not only did he fail on the pitch, but he also harmed Fenerbahce off it. He did all he could do to exploit his brand and boost his PR and his influence over the fans. But it doesn't work when you don't give anything on the pitch."

Football fans everywhere are quick to cite abstract factors like "passion" and "motivation" when they're unhappy with a player but, in Özil's case, the experts agree.

"Although he said that playing for Fenerbahce was his 'childhood dream,' he never displayed this passion on the pitch," local sports journalist Kenan Basaran tells DW. "He had had his fill of success before he came to Turkey."

Another Turkey-based sports commentator, Kaan Kural, also questions Özil's motivation to move to Turkey. "Özil never gave his best here. To me, he never had any intention of doing so," he said.

"When I looked at his earlier statements and career progression, I got the feeling that he saw Turkey as a place to retire rather than turning over a new leaf here. And unfortunately, I turned out to be right."

There were also more quantifiable technical factors which contributed to Özil's poor performances in the Süper Lig, with Fenerbahce going through a tumultuous time with four different coaches in 18 months.

According to Basaran, none had the pedigree to handle a player of Özil's standing. What's more, he argues, Özil had excelled at Arsenal, and previously at Real Madrid, in well-organized systems surrounded by top players, circumstances which were lacking at Fenerbahce.

Turkish football pundit Serdar Ali Celikler partially agrees, saying: "Fenerbahce did not have coaches who could get the best out of Özil, nor did they have players who were on his wave length."

Still, Celikler also thinks Özil himself deserves criticism. "When it comes to Özil, he is always right and the coaches are always wrong. It was the same when he had problems with Unai Emery or Mikel Arteta [at Arsenal]. For Özil, all of them are wrong. Is that really possible?"

Fenerbahce's new head coach Jorge Jesus, the experienced Portuguese coach who won three Portuguese titles with Benfica as well as the Copa Libertadores with Brazilian side Flamengo in 2019, certainly has pedigree, but didn't rush to overturn Özil's exclusion from the squad when he was appointed last month.

Fenerbahce's media department also rejected DW's request to have a comment from club officials on Özil's departure, saying simply that they had "dropped this subject." 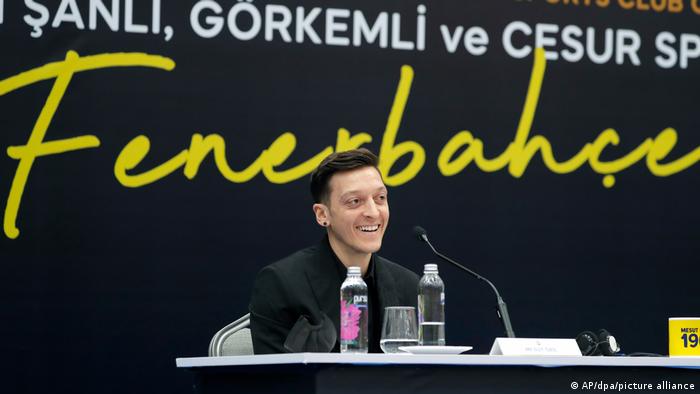 All smiles: Özil said he had dreamed of playing for Fenerbahce, but the move didn't work out

Fenerbahce might want to move on but, as ever with Mesut Özil – and indeed Turkish football in general – his latest move has also turned heads outside the game itself, reigniting debate on the relationship between football and politics in the country.

Özil's new employers Basaksehir, surprise champions in 2020, are inextricably linked to President Erdogan and his ruling AKP party. Basaksehir's chairman, Goksel Gumusdag, is an AKP member related to Erdogan though marriage while Erdogan himself makes no bones about the fact that he personally established the club, which plays in a remote western suburb of Istanbul where AKP support is high.

The club's main fan group calls itself "1453," the date of the Ottoman conquest of Constantinople, a clear commitment to the nationalist and religious values which characterize Erdogan's politics in the nominally secular Turkish state.

Özil also has close personal ties to Erdogan, who was best man at his wedding in 2019 and with whom he posed for a controversial photograph in May 2018, along with fellow German international Ilkay Gündogan. Amid criticism in Germany, Gündogan distanced himself from the Turkish president, but Özil doubled down, ending his international career after what he described as "racist" abuse following Germany's disastrous World Cup campaign in Russia later that summer.

"Now, a club that is close to the Turkish government has opened its doors to him," comments reporter Basaran. "You could say that Basaksehir have signed the family's favorite son."

'Özil hasn't quit football, but football has quit him'

Özil isn't the first Erdogan supporter to sign for Basaksehir. In 2018, after burning bridges at Barcelona, partly due to his public support for Erdogan's 2017 referendum campaign, Turkish international midfielder Arda Turan joined the club on loan. Erdogan was best man at Turan's wedding, too.

So, has Basaksehir become a safe haven for pro-Erdogan footballers whose careers have gone into decline?

"It's impossible to give an exact answer," says Celikler, adding:

"But let's think about it: Turan was sacked by Barcelona because he openly supported Erdogan, so they had him transferred to Basaksehir where they could look out for him. Özil was criticized in Germany because of his photo with Erdogan and saw himself effectively kicked out of the national team, as he saw it. They couldn't allow him to be victimized and, since it hasn't worked out at Fenerbahce, they've brought him to Basaksehir.

"Is this what's happened? There's no way to tell, but it is not an irrational suggestion."

Wherever he has played, Özil has attracted immense support from his fanatical supporters, who are often fans of him personally rather than the club he plays for. Many love him purely for his footballing ability; his smooth and creative style of play make him a wonderful player to watch when he's on form. But some Turks see him, despite his German nationality, as Turkey's greatest ever footballing export, and as such a representative of Turkish values and a victim of perceived European racism.

Whatever the truth, the drama is constant. Indeed, among the hundreds of thousands tracking that flight from London to Istanbul in January 2021 were some claiming to be Arsenal fans and joking that they were "making sure he's definitely gone and is someone else's problem now."

But now, having disappointed at Fenerbahce, the attention, the support and the mockery is all evaporating. At Basaksehir, a club with a tiny fan base of no more than a few thousand, Özil won't be subject to the same pressure from either fans or media, whether he succeeds or fails.

"Özil still thinks he hasn't quit football," says Celikler. "But football seems to have quit him."

A "Vladimir Putin" chant rang out at a Champions League football match in Istanbul between Fenerbahce and Dynamo Kyiv. The incident was widely condemned and is now being investigated.