Turkish champions Basaksehir are set to take on Manchester United in the Champions League. Domestically, they've shaken up the Super Lig, but links to President Erdogan give the club a political aftertaste. 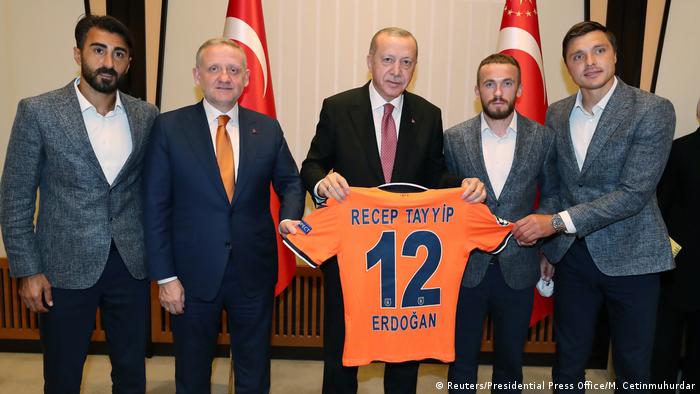 When the champions of the Turkish Super Lig are crowned each year, the people of Istanbul certainly know about it.

Car horns blare across the city, and partying supporters fill the streets with the yellow and blue of Fenerbahce, the red and gold of Galatasaray or the black and white of Besiktas. After all, other than Bursaspor in 2010, Istanbul's "Big Three" have won every Turkish championship since 1984.

This year, however, the sprawling metropolis that straddles the Bosphorus on the border between Europe and Asia was a lot quieter — and not just because of the coronavirus pandemic.

In the western suburb of Basaksehir, far from the labyrinthine mazes of the old town, the open-top bus carrying the Istanbul Basaksehir players sped serenely down wide, newly built boulevards, cheered at irregular intervals by fans wearing orange and blue. They had just lost 3-2 away to Kasimpasa on the final day, July 26, but it didn't matter; they had wrapped up the Super Lig title a week earlier, the first in the club's short history.

It had been coming. Founded in 1990 as an unfashionable municipality team, the team was promoted and renamed Istanbul Basaksehir in 2014 and slowly began to increase the pressure on the Big Three. Finally, under head coach Okan Buruk, a side which combined top Turkish talent such as midfielder Irfan Can Kahveci and foreign veterans such as Demba Ba and Gael Clichy became only the sixth different Super Lig winners since 1959.

Among the first to convey their congratulations: Recep Tayyip Erdogan, the Turkish president whose image is inextricably linked to Basaksehir. His portrait hangs in the lobby at the training ground, the team plays in the orange and blue colors of Erdogan's Justice and Development Party (AKP), and the club president, Goksel Gumusdag, a former AKP official, is related to Erdogan by marriage.

When the new Fatih Terim Stadium was opened in 2014, Erdogan himself played in an exhibition match. After scoring — or being allowed to score — a hat trick, the president's number 12 shirt was officially retired. When the open-top bus tour arrived at the stadium for the official title celebration, an oversized replica Erdogan shirt was hoisted from the roof.

The club's main sponsors also have close ties to the government. Medipol, for example, a network of health clinics and hospitals, was founded by health minister and Erdogan ally Fahrettin Koca, while Istanbul's new airport, just up the highway from the stadium, has been a flagship project in Erdogan's construction and credit boom.

It's part of what football writer and author James Montague calls a "network of patronage" designed to promote a new, wealthy, religious elite which represents the values of Erdogan's AKP and opposes Turkey's traditionally secular status quo. It's no coincidence that the district of Basaksehir is also a hotbed of AKP support, while the club has acquired the disparaging nickname "Erdogan FC" in some quarters.

"There are fewer places that could encapsulate Erdogan's 20 years in power better than Basaksehir," writes Montague in his book 1312: Among the Ultras, describing "frenzied real-estate construction, the primacy of football and a deepening Islamic religiosity."

Erdogan is well aware of Turkey's obsession with football. But the political potency of Turkey's national sport became most obvious to him during the Gezi Park protests in 2013. After opposition by environmental activists to plans to build yet another shopping mall on a public park escalated into massive anti-government protests, hardcore supporters of Galatasaray, Fenerbahce and Besiktas put aside their rivalries to help defend protesters against the authorities.

The following season, an automated fan ID system was introduced, forcing fans to purchase e-tickets with the so-called "Passolig" credit card linked to the Aktif Bank, which also has links to the AKP, leading to criticism and boycotts from fans. Political chants and displays were also banned in Turkish stadiums, then interior minister Muammer Güler declaring: "Political and ideological slogans do not comply with sport's spirit."

The regulations don't appear to apply to the most prominent Basaksehir fan group, known as 1453 — the year of the Ottoman conquest of Constantinople and a date which still carries nationalistic undertones in Turkey.

Asked whether there is a political meaning behind the name, however, spokesman Burak insists that "the group has no specific political, religious or ethnic identity. This is our red line. When we come together in the stands, there is no other topic except our team."

Given that the club was only founded in its current form six years ago, the members of 1453 generally supported other Istanbul clubs previously. But they insist that they always harbored a love for Basaksehir, the part of town they call home. "It is much more than a team for us," explains Burak. "When the neighborhood in which we all grew up got its own team, it was naturally our duty to support it, and that's what we do." 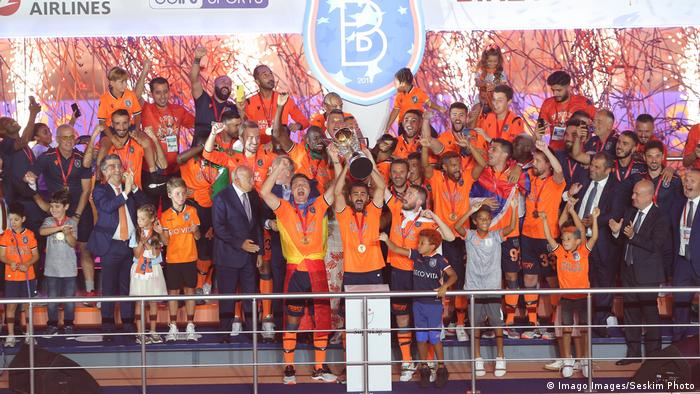 Istanbul Basaksehir have upset the established order in Turkish football

Burak feels that the focus on the club's links to Erdogan are unfair and "aimed at casting a cloud on our success," and prefers to highlight the professional work done on the sporting side. He also says his group enjoys the exclusivity which comes with supporting a relatively small club, rather than getting lost in the anonymous masses of Galatasaray, Fenerbahce and Besiktas supporters, where the biggest ultra groups are more akin to NGOs than mere fan clubs.

A wake-up call for the Big Three

The emotion and passion that the Big Three generate in Istanbul can hinder as much as they impress. With club presidents constantly campaigning for re-election, long-term planning is in short supply and expensive foreign transfers are often favored over sustainable development.

As a result, they are drowning in a combined €1.5 billion ($1.8 billion) of debt and all have breached Financial Fair Play regulations in recent years. German imports Max Kruse and Loris Karius have returned to the Bundesliga with Union Berlin this season after complaining of unpaid wages during spells with Fenerbahce and Besiktas respectively. Former Besiktas captain Burak Yilmaz has joined French side Lille after "hardly getting paid in a year" in Turkey.

"Despite the debts, fans on social media are still demanding stars," says Fatih Demireli, the German-Turkish editor-in-chief of Socrates magazine. "Social media is extremely powerful in Turkey and the clubs are so heavily influenced by it that they bow to the pressure."

The Big Three finished an embarrassing third (Besiktas), sixth (Galatasaray) and seventh (Fenerbahce) last season, with Galatasaray only sneaking into the Europa League because of a ban on Trabzonspor.

"It has to stop at some point but I just can't see it," says Demireli. "There needs to be change in attitude from the fans and media as well. The clubs need to start managing their money correctly and developing their own players, rather than just buying foreign stars. But they just aren't smart enough."

With average attendances of less than 3,000, Basaksehir aren't under any pressure from their fledgling fanbase and are free to work efficiently and professionally. "Squad planning, organization ... everything that the others get wrong, Basaksehir have been doing right in the last few years," says Demireli.

"Their success isn't a surprise; it was a matter of time. Basaksehir will continue to develop and they'll be among the favorites again next season. They could dominate Turkish football for the next few years."

The biggest stage of all for Erdogan

"A revolutionary success story has been written in Turkish football," declared club president Gumusdag. "We will continue on our path with the same belief and the same emotion."

This year, Basaksehir are in the Champions League. With Group H featuring last season's finalists Paris Saint-Germain and three-time winners Manchester United, Erdogan could not have wished for a more prominent stage for his football team, which he honored with a celebratory reception at the presidential palace in Ankara following the title triumph this summer.

However, they haven't had an easy start to life in Europe's top club competition. They have suffered two 2-0 defeats, first away to RB Leipzig and then at home to PSG.

There's precious little to suggest the result will be any better on Wednesday when they host Group H leaders Manchester United, who top the group with a perfect two wins out of two and are coming off a 5-0 drubbing of Leipzig.

Editorial note: Cengiz Ozbek contributed to the reporting in this work.

A military salute by Turkish players at an international against Albania has spilled over onto Germany’s amateur pitches. Regional associations are trying to put a lid on a potential source of on-field tensions.