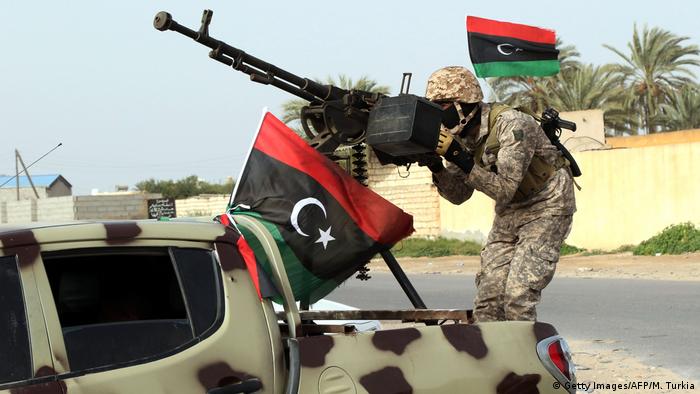 A spokesman for the self-proclaimed Libyan National Army (LNA) confirmed on Friday that 141 people, most of whom were LNA soldiers, were killed a day earlier in an attack on an airbase in south Libya.

LNA spokesman Ahmad al-Mesmari said the attack on the Brak al-Shati airbase had been carried out by a brigade known as he Third Force, a militia group nominally aligned with the UN-backed Government of National Accord (GNA). Islamist militants were also thought to have been involved, al-Mesmari added.

The head of the GNA in Tripoli subsequently suspended his defense minister pending an investigation into the attack. GNA Prime Minister Fayez Seraj said he condemned the escalation at Brak Al-Shati "in the strongest terms" and denied he ordered the attack to the ministry of defense.

While the death toll could not be independently verified, al-Mesmari said that 103 of those killed were LNA soldiers, while the rest were civilians.

The rights organization Human Rights Watch, citing a medical official, an eyewitness report and photographic and video evidence, said the attacking forces had killed "scores of LNA fighters, some with bullets to the head, in apparent acts of summary execution."

The UN's Libya envoy, Martin Kobler, described the attack as unprovoked, saying, "I am outraged by reports of significant numbers of fatalities, including civilians and by reports that summary executions may have taken place."

The reported massacre shattered a ceasefire deal in the area agreed less than a month ago between GNA Prime Minister Seraj and LNA chief Khalifa Haftar.

Thursday's airbase attack may have already spurred a re-escalation in the fighting between Libya's eastern and western military alliances.

On Friday, a car bomb south of Benghazi killed a prominent LNA-loyalist, along with five other people including a child.

Meanwhile, Al-Mesmari said the LNA had launched retaliatory airstrikes in the Third Force-controlled regions of Sabha and Jufra.