The most recent cartoon on refugees by the French satirical magazine "Charlie Hebdo" is highly controversial. It depicts the drowned Aylan Kurdi as a sex offender - and many find this utterly tasteless. 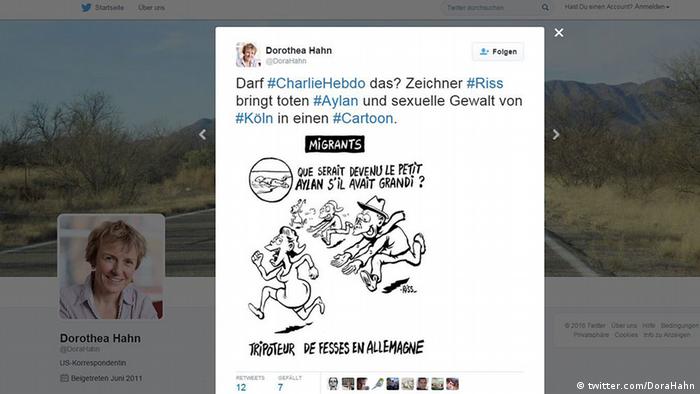 A cartoon in the latest "Charlie Hebdo" features drowned Syrian migrant Aylan Kurdi. The photo of the toddler's lifeless body washed ashore on a Turkish beach went around the world last year and became a symbol of Europe's refugee crisis.

The new cartoon shows a bug-eyed grown up Kurdi, lasciviously running a screaming woman trying to escape him. "What would have become of little Aylan if he had survived? A groper in Germany," the text reads.

Charlie Hebdo is taking a jab at the current debate of whether there is a link between the massive sex assaults on women in the German city of Cologne on New Year's Eve and the massive influx of refugees into the country last year. Hundreds of women have filed criminal complaints of harassment and theft by groups of men described as looking like North Africans or Arabs. The incident fueled the refugee debate, and led to attacks on foreigners and refugees.

The controversial "Charlie Hebdo" cartoon is signed by Riss, aka magazine artist Laurent Sourisseau. He survived the January 7, 2015 terror attack on the offices of "Charlie Hebdo" in Paris. Some users on social media slam the artist and the magazine with accusations of racism and "boundless" irreverance.

Others say that by choosing crass provocation, Charlie Hebdo has managed to create a greater public interest and discourse on the issue.

It's not the first time the magazine depicts Aylan Kurdi in a cartoon. In September 2015, "Charlie Hebdo" published a caricature of the drowned child next to a McDonald's billboard promoting two Happy Meals for the price of one. "Migrants welcome," the caricature reads, with another headling adding "So close to the goal..."

Many users felt the magazine had gone too far, and had overshot the boundaries of satire by far.

In both cases, "Charlie Hebdo" must have been fully aware of the reactions such caricatures were bound to evoke.

New versions of the cartoon are emerging to retaliate, such as the one referring to the fact that Steve Jobs' parents were Syrian. To the question "What would Aylan Kurdi have become?" it answers: "International inventor."

Francois Hollande and Paris Mayor Anne Hidalgo have dedicated a plaque in the Place de la Republique to the 147 people who died at the hands of terrorists in France in 2015. This follows a week of mourning in France. (10.01.2016)

Turkish satirical magazine Leman is under constant fire. Editor-in-chief Tuncay Akgün talked to DW about its close relationship with Charlie Hebdo, one year after the deadly terror attacks on its French counterpart. (07.01.2016)