Researchers in the city say their latest piece of equipment can carry out 158 trillion calculations per second. With all that power, they are hoping for ever more detailed climate predictions. 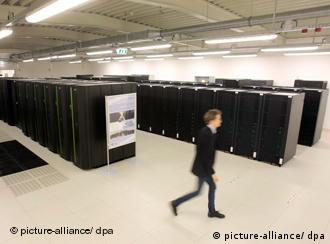 The computer is 60 times faster than its predecessor

German scientists have unveiled the most powerful computer in the world when it comes to predicting weather patterns.

A machine at the German Climate Computing Center in Hamburg can look at any region of the world and forecast how its weather might change as a result of global warming.

Weighing 35 tonnes and using 50 kilometers (31 miles) of cables, the computer is known as "Blizzard."

It can operate at a speed of 158 "Tera Flops", that is to say it can carry out 158 trillion calculations per second.

Scientists hope Blizzard will be able to carry our far more detailed calculations than before, taking changes to polar ice-caps and plant life into account.

The computer is "60 times faster than its predecessor and one of the world's largest supercomputers," said the research centre in a statement.

"It's the biggest computer in the world to be dedicated solely to climate research," said German Science Minister Annette Schavan at Blizzard's inauguration.

The 35 million-euro computer has been working since April, but its official commissioning was delayed to coincide with the Copenhagen climate summit.

Supercomputers use a lot of energy, but the center said that it would be powered only with "green electricity" from renewable sources.