The city of Hamburg is the first to penalize older diesel vehicles in an effort to improve air quality. The partial diesel ban was cheered by environmental groups and represents a blow to the auto industry. 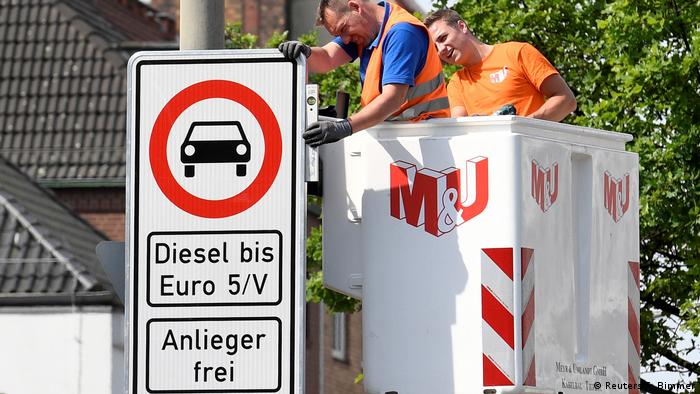 Hamburg's partial diesel ban begins on Thursday, forbidding drivers with old diesel engines from transiting in two major streets.
Hamburg has become the first German city to limit diesel cars on a regular basis, since a Federal Administrative Court ruled that German states, cities and municipalities have the right to impose such bans.

The partial ban represents a victory for environmental groups, who have advocated for improved air quality in German cities. But it is a blow to automakers, reeling from a diesel manipulation scandal that has rocked the industry and led to a decrease in consumer demand for diesel engine cars.

There will be some exceptions made for residents and the city will implement alternate route plans for people to avoid the two roads.

The ban affects all diesel cars that do not meet Euro-6 emissions standards and violators will be fined at €25 ($30) for cars and €75 for trucks.

But in the early stages of the plan, police will perform random stops and will issue warnings if necessary. Gradually, after a transition period, the city will turn to full enforcement of the fines.

German Green Party leader Cem Özdemir praised the city's move and hoped for a ripple effect. "Hamburg is now moving forward, I am sure other cities will follow," Özdemir said.

The environmental advocacy group Greenpeace celebrated the partial ban. "Hamburg gave hope to hundreds of thousands of people who live along major roads and who have to breathe dirty air on a daily basis," the organization's spokesman, Niklas Schinerl, said.

Schinerl added that symbolic gestures were not enough and that cities needed to move on to invest in alternatives to car, such as mass transit buses, rail, and expanding cycling paths.

The German Pro-Rail Alliance praised the implementation of the ban and used the opportunity to promote the investment and expansion of rail in metropolitan areas as the best medium to longer-term solution.

The decision of a German court to allow municipalities to impose partial bans on diesel vehicles has stirred up more dust than the daily traffic in German cities. DW's Henrik Böhme asks: What now? (28.02.2018)