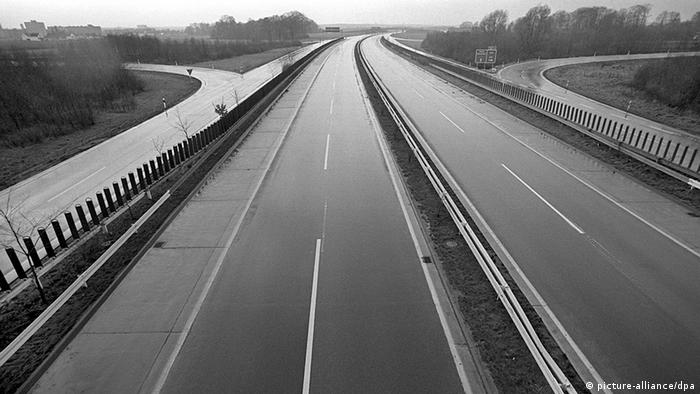 Take a look at Germany after the diesel ban verdict of the Federal Administrative Court in Leipzig. In the bitter cold of a late February morning rush hour, an avalanche of cars pushes from A to B. The radio reports the usual traffic jams. Commuter trains are jam-packed, buses and trams as well. There's no driving ban to be found anywhere within the length and breadth of the country.

The nation-wide media storm on the day of the court ruling had given a different impression: The end of the diesel motor is nigh! Millions of diesel owners — expropriated!

Because Germany is a nation of motor-car fanatics — and is likely to continue in that vein for the foreseeable future — its people have seldom followed the verdict of a German court with such avidity. Yet in the cold clear light of the next day, the fuss has been revealed as something of a false alarm.

Read also: What does the German court ruling mean?

Yet it is also clear that politics and the auto industry, which have been closely intertwined for decades, cannot simply carry on as if nothing had happened.

This symbiosis between the car industry and the German political elite is what drove the industry into its present diesel-soaked ditch. It has led to a remarkable situation in which policy is being driven not by politicians, but rather by a society called Environmental Action Germany (DUH), which has less than 300 members, but almost 100 full-time employees. DUH is driving national transportation policy by means of lawsuits.

DUH boss Jürgen Resch termed the ruling of the Federal Administrative Court in Leipzig "a very big day for clean air in Germany." But there are other factors that cause air pollution besides diesel engines. It will be interesting to see what Resch and his colleagues target next. The outdoor barbecue habit so beloved of millions of urban Germans on summer days? New Year's Eve fireworks? Cigarette smoking? These will generate more particulate matter in 2020 than all vehicle traffic taken together, according to Germany's Federal Environment Agency.

Or will DUH go after the internal combustion engine in all its varieties, not just diesel? Germany's motorists are likely to turn away from diesel vehicles — indeed that is already happening, as new vehicle registration figures and the salesrooms of used-car dealers both show.

But most car buyers aren't shifting to expensive hybrid or electric cars. Instead, they're buying petrol engine cars, which are, at least for now, less expensive. Unfortunately, petrol cars are less energy-efficient than diesel engines, and so they result in increased emissions of carbon dioxide, which in turn damages the climate. And so one must face the question: How much private transport do we still want to afford ourselves?

The dream of free public transport

The pretty idea ​​the German government floated recently of "free public transport" (rather than diesel bans) as a means of reducing air pollution from automobiles didn't last for even two weeks before it was given a quick burial.

The idea was intended to reassure the European Union administration in Brussels, and forestall any possible action by the European Commission to impose air quality measures on Germany. But the very first meeting with the mayors of the five selected model cities, held the day before the Leipzig court's judgment, made clear: Free public transit is not feasible.

It would be too expensive, the infrastructure is not available, and there are far too few buses, trains and drivers available. In addition, a highly complicated network of so-called transport networks presents an administrative nightmare. Typically for Germany, rather than a national system of public transit tariffs, there's a patchwork of barely transparent local and regional systems.

Whoever has been in Berlin, Cologne or Hamburg as a tourist, trying to get from A to B via public transit, and has had to stand in front of a ticket machine sorting out what options to press on an electronic touch screen with a bewildering menu, understands intuitively how difficult it might prove to untangle the rat's nest of tariffs within each regional transport network.

Read more: Move is on to ban diesel cars

Loose talk of "free public transit" is thus of no help to commuters in those cities where diesel vehicle bans are a genuine risk. What could happen instead, to try to address the problem of diesel engine-produced smog, is that the car industry may be forced to retrofit diesel cars with effective emissions control equipment — of the kind it should have built into the cars in the first place, rather than taking the option they did, which was to commit mass fraud in laboratory emissions tests for about a decade prior to getting caught in 2015.

Retrofitting millions of cars would cost billions, which companies would prefer to invest in technologies of tomorrow rather than in those of yesterday. In that context, whether retrofitting diesel cars with effective emissions reduction systems will actually make the air better on a net basis remains to be seen.

In any case, according to the current legal situation, it appears that carmakers are not obliged to pay the costs of the retrofits, because diesel cars of the Euro 5 emissions standard complied with the applicable licensing regulations when they were built. Those regulations cannot be changed retroactively.

Maybe the retrofits won't be necessary in the end. Carmakers proved able to cheat on laboratory emissions tests for a number of years, but no one can cheat the laws of physics. Governments will have to take note that the CO2 emissions of vehicles refitted with NOx pollution reduction devices invariably increase. In the end, nobody wants that.

So if the objective is to improve air quality, why not start by scrapping the tax privilege on diesel fuel? One way to achieve less traffic in cities is to make driving a whole lot more expensive. But at the same time, it will be necessary to provide commuters with good alternatives, in the form of improved public transport. This is possible and feasible, but it takes time — and it costs serious money. Perhaps a surtax on diesel and petrol fuels could pay for the needed investments.

And amidst the turmoil, one should not forget this fact: In the past almost 30 years, emissions of nitrogen oxide by motor vehicle traffic have dropped by almost 70 percent, because while the cars of the past decade have not been clean enough, they were cleaner than those of previous eras.

Urban city-center diesel bans may in the end prove to be a mere "ultima ratio," more a hypothetical threat to motivate implementation of other policy options, rather than a policy that actually gets implemented. The Leipzig court's ruling only provides cities with the option, not the obligation, to impose diesel bans in their efforts to meet European clean air regulations.

Whatever happens, let's make sure governments don't think they have a right to tell people what means of mobility they must use to get around. The freedom to either sit stuck in one's car in a traffic jam, or squeeze into a packed commuter train — to decide whether to grind up against a rock or a hard place — that should be left up to each of us.