The streets of Port-au-Prince were eerily quiet Monday due to a general strike called over the security situation. The general strike comes days after 17 US and Canadian missionaries were abducted. 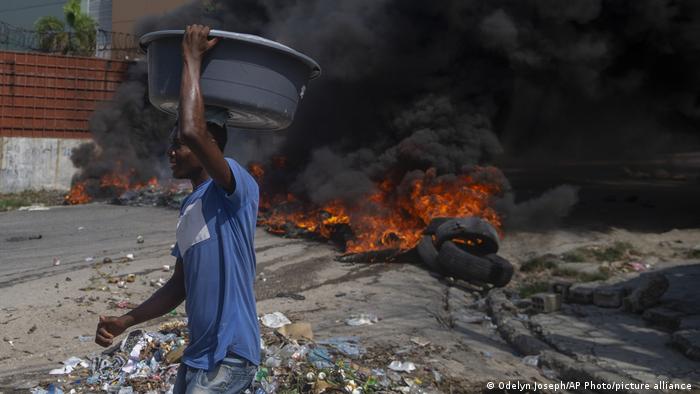 Port-au-Prince ground to a halt Monday as a general strike called over the deteriorating security situation in the country left usually chaotic streets empty. The strike came just days after 17 US and Canadian missionaries were abducted after visiting an orphanage.

Thousands of workers took part in the strike led by local unions and other civil society groups. Drivers of private moto taxis and public buses stayed home while businesses, schools and government offices were shuttered.

Some streets saw tire pyres alight in Port-au-Prince and in southern Haiti, the AP news agency reported some threw rocks at the few cars there were on the street.

US officials, including the FBI, are working with the Haitian government to free the 17 missionaries from the US and Canada kidnapped over the weekend. Their mass abduction, which includes five children, highlights the peril confronting Haitians in their own country.

Changeux Mehu, president of Haiti's Association of Owners and Drivers who supported the general strike told AFP, "The kidnapping of the Americans shows that no one is safe in the country."

The abduction of the missionaries is the largest mass kidnapping of its kind in recent years in Haiti. Gangs in Haiti have grown more brazen amid political instability, a severe and growing economic crisis and a crime wave forcing many to leave the country by any means necessary and try their luck abroad.

US steps up security at Mexico-Texas border crossing

Kidnapping gangs in Haiti have been known to demand ransoms that can range from hundreds of dollars to more than one million. Sometimes they have murdered those they abducted if ransom efforts are unsuccessful.

Haitian police have blamed Saturday's abductions on the 400 Mawozo gang with its history of killings, kidnappings and extortion. Almost a year ago, a wanted poster was issued for Wilson Joseph, the alleged gang leader who is wanted on charges that include murder, attempted murder, kidnapping, auto theft and carjacking trucks carrying goods.

According to the Center for Analysis and Research in Human Rights, there have been over 600 kidnappings in the first nine months of this year compared to 231 for the same period last year.

Long the poorest country in the Western hemisphere, the recent chaos has been extraordinary even by the standards of life in a difficult country like Haiti.

Emergency aid: Help after the earthquake in Haiti

On July 7, President Jovenal Moise was fatally shot. The following month, a 7.2 magnitude earthquake leveled much of the country and killed more than 2,200 people.

Germain Joce Salvador, a young man in his twenties told AFP, "It's as if we weren't living anymore," adding, "You can't go on everyday hearing that it's a loved one, a friend or someone else who is kidnapped."

Diego Toussaint, 37, an entrepreneur who sells solar panels in the capital, told Reuters the country had finally hit bottom.

"This strike is our way of saying that we can't take it anymore," he said. "We live in fear."