Haitians mourned President Jovenel Moise at a funeral in his hometown, as anger over his death triggered violent protests just outside the event. 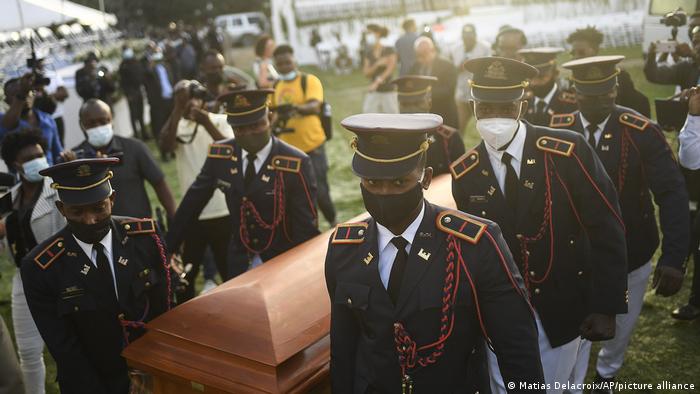 A funeral for Haitian President Jovenel Moise was held on Friday in his hometown Cap-Haitien, as the country continues to be marred in political turmoil , two weeks after his assassination.

In the middle of the ceremony, hundreds of protesters clashed with police outside the private residence, with shots fired and tear gas being deployed.

Foreign dignitaries, including a US delegation, were rushed out of the event.

The US ambassador to the UN, Linda Thomas-Greenfield, and a new special envoy to Haiti, Daniel Foote, were in attendance.

''The Haitian people deserve democracy, stability, security, and prosperity, and we stand with them in this time of crisis. We urge everyone to express themselves peacefully and refrain from violence,'' Thomas-Greenfield said on Twitter.

Moise was gunned down in Port-au-Prince on July 7, in a plot that has led to several arrests but few answers as to who was behind the attack.

"The crisis is extremely grave now, there is a political crisis and economic crisis, an institutional crisis and a security crisis, and all of these crises have been aggravated by the assassination of President Jovenel Moise," Robert Fatton, professor of government and foreign affairs at the University of Virginia in the United States, told DW.

The funeral was set at his family's seaside property, where he lived as a boy. He will be laid to rest in a partly built tomb just a few steps from a mausoleum for his father, who died last year.

Access to the compound was restricted to just one entrance that was controlled by police.

Men in military attire carried the late president's closed wooden coffin to an auditorium, where guards stood by, and a Catholic priest offered a blessing. 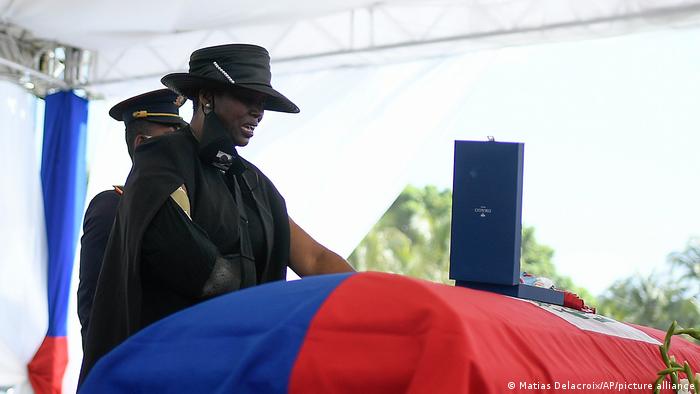 Former first lady of Haiti, Martine Moise, was also hurt in the attack that killed her husband

The slain president's widow, Martine Moise, who was also hurt in the attack, arrived at the funeral to cries of "Justice! Justice!'' With her right arm in a sling, she walked up to the casket in tears, accompanied by her three children.

"What crime did you commit to deserve such punishment?" she asked in an emotional eulogy, adding that her husband had tried to clean up Haiti's "rotten and unfair" politics before being "savagely murdered."

Martine Moise spoke publicly for the first time since the attack at the end of the ceremony,

''They're watching us, waiting for us to be afraid,'' she said. ''We don't want vengeance or violence. We're not going to be scared.''

Tensions were boiling in Cap-Haitien two days before the funeral, as protesters fired shots into the air, set tires on fire and blocked roads.

On Thursday, authorities clashed with the protesters, with one heavily guarded police convoy driving through a flaming barricade, the vehicle nearly flipping over.

Haitian police chief Leon Charles was booed and heckled while inspecting security arrangements for the funeral, as some locals blame him for not protecting Moise.

While some of Moise's supporters expressed anger for their leader's death, others celebrated his life.

Banners praising Moise were placed on buildings along the narrow streets of Cap-Haitien's old town, with proclamations such as "They killed the body, but the dream will never die," and "Jovenel Moise - defender of the poor."

The funeral comes in the midst of a political vacuum in the impoverished Caribbean nation. Haiti's interim Prime Minister Claude Joseph stepped down on Thursday to make way for Ariel Henry. Moise had earmarked Henry as the next PM a day before his death.

Henry also enjoyed the backing of the so-called Core Group of ambassadors from Germany, Brazil, France, Canada, the US, Spain, the EU, the UN and the Organization of American States.

"It remains to be seen if the current government can create a more inclusive form of governing that could to some extent get the support of the parties of the opposition and civil society. This is an extremely difficult task, and I'm not sure that this government is going to be able to do it," Fatton said of the challenges facing Haiti's new leader.

Haiti has no working parliament or president at the moment. With only a handful of senators in power, the country is expected to hold elections later this year.