Guttenberg says German troops will stay in Afghan ′war′ | Germany| News and in-depth reporting from Berlin and beyond | DW | 05.04.2010

Defense Minister Guttenberg has defended the mission in Afghanistan amid mounting criticism following the deaths of German and Afghan soldiers. An investigation has been launched into Friday's friendly fire incident. 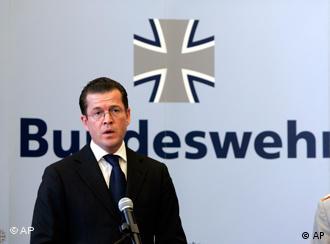 Guttenberg told journalists that the office of the German prosecutor general had already started an investigation into Friday's friendly fire incident. He said that in addition, his own ministry and the Afghan Defense Ministry would also investigate the circumstances leading to the Afghan soldiers' death.

Guttenberg: situation could be called war

Guttenberg also stressed Germany's commitment to making Afghanistan safe. "Our soldiers aren't there for nothing," he said.

However, he said that in colloquial terms, the situation faced by German soldiers in Afghanistan could be called a war.

The remarks reflect calls by Foreign Minister Guido Westerwelle and some others to reclassify the German mission in Afghanistan as "armed conflict." So far, German military forces have been subjected to the civil penal code, given their participation in training Afghan police and soldiers and in reconstruction activities.

The Bundeswehr mission in Afghanistan is becoming increasingly unpopular in Germany

Guttenberg's comments come amid mounting calls by peace activists to pull Bundeswehr troops out of Afghanistan. The mission is widely unpopular among the German population.

Berlin currently has around 4,500 troops deployed in Afghanistan, working alongside soldiers from other countries under NATO command to check insurgents in the country.

Most of the German forces are in northern Afghanistan, which is regarded as relatively peaceful compared to other areas of the country. However, Kunduz has seen an increase in attacks by Taliban and other insurgent groups in recent months.

Describing Friday's attack on the German troops, the head of the German armed forces General Volker Wieker told a news conference that a patrol was ambushed with gunfire and rockets by two groups of Taliban fighters. A German armored vehicle also struck a mine, he said.

The fighting that followed lasted around 10 hours, Wieker said, adding that NATO air support was called in but was unable to attack for fear of striking German soldiers or civilians.

Three soldiers were killed and eight injured, the general said. Four soldiers wounded in the firefight have returned to Germany and are said to be in stable condition.

The general said a German unit sent to reinforce the soldiers under attack had opened fire on two civilian vehicles which had not heeded calls to stop. He said six Afghan soldiers in one of the vehicles were killed. 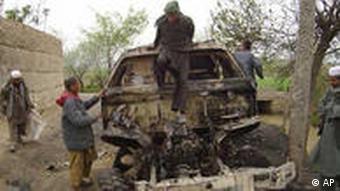 Attacks have been on the rise in Kunduz province

Guttenberg expressed his condolences to the families of the six Afghan soldiers and the three German troops killed near Kunduz.

German troops in Afghanistan paid their last respects to the fallen soldiers at a ceremony held at the German field camp in Kunduz. German Development Minister Dirk Niebel, who was in Afghanistan when the attack occurred, also attended the ceremony.

Meanwhile, peace activists in Germany have taken to the streets across the country in traditional Easter rallies against war. This year, the main theme of the marches has been the conflict in Afghanistan and the death of German and Afghan soldiers there.

At a ceremony in a military camp in north Afghanistan, German troops have honored the three soldiers who died in a Taliban attack on Friday. (04.04.2010)

Peace demonstrators took to the streets across Germany in traditional Easter marches against war. A theme of the rallies has been fighting in Afghanistan and the deaths of German and Afghan soldiers on Friday. (03.04.2010)

German forces have killed at least five Afghan soldiers in friendly fire at a checkpoint. Meanwhile, the Taliban issued a warning to Germany after three Bundeswehr soldiers lost their lives in an attack by insurgents. (03.04.2010)