A Nigerian regional governor called on the residents to "defend themselves" against bandits following the latest brutal attack. 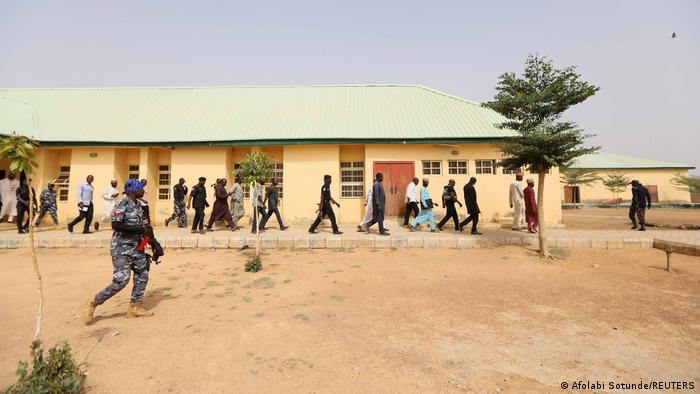 Gunmen have ramped up attacks in Nigeria's northwest region

At least 90 people were killed by armed men in northwestern Nigeria, local media reported on Friday citing the region's police.

"An attack took place at Kadawa village of Zurmi local government where bandits took advantage of the night to strike on unsuspecting people and killed them in cold blood," a police spokesperson told the News Agency of Nigeria (NAN).

"On getting the news of the attack, the Commissioner of Police ordered combined units of security personnel to mobilize to the area, restore peace and confidence in the communities and track the perpetrators so that they can be brought to book," he added.

Nigeria suffers yet another school kidnapping

The attack, which took place on Thursday in a village in Zamfara state, was the latest in a spate of deadly attacks and mass kidnappings the region has seen in recent months.

Earlier on Friday, the governor of Zamfara told residents to take matters into their own hands and fight back against such attacks.

"I am calling on the people of the state to defend themselves if the bandits attack them," Governor Bello Matawalle was quoted as saying by the Nigerian Tribune daily.

"My government has approved that whenever the bandits attack you, do not wait for the security personnel to come to your rescue. You should rise and protect yourselves," he said.

Gunmen have ramped up attacks in the country's northwest region forcing thousands of people to flee to neighboring Niger.

The security situation in central and northwestern Nigeria remains fragile. The rising violence presents a new challenge for President Muhammadu Buhari's security forces who have been locked in a war with the jihadists in the country's northeast for more than a decade.

The region has also been hit by a wave of criminal gangs kidnapping children in the hopes of securing a ransom. More than 700 children and students have been kidnapped for ransom since December.

Earlier this month, Doctors Without Borders (MSF) warned that the Zamfara state is facing a humanitarian crisis.

The aid group said it had already treated 10,300 children in Zamfara between January and April for severe acute malnutrition, measles, malaria, and other conditions.

According to MSF, gunmen are increasingly sexually assaulting their hostages, and many rape survivors have not received treatment.

Abubakar Shekau, leader of the Boko Haram terrorist group, is said to have committed suicide in battle. Far from solving a problem for the Nigerian government, his death is likely to further destabilize the region.

Nigeria's Twitter suspension has cut off an estimated 40 million users. The ban — while celebrated by some — has seen a global outcry over freedom of expression and put a spotlight on the nation's north-south divide.

T.B. Joshua, a Nigerian preacher, has died at the age of 57. Known as the Prophet to his followers, he also courted controversy by claiming prayers could cure homosexuality and AIDS.