Growing opposition to Israel in Germany | Germany | News and in-depth reporting from Berlin and beyond | DW | 22.07.2014

As pro-Gaza demonstrations with anti-Jewish sentiments spread throughout Europe, a public debate in Germany aims to draw a clear line between criticism of Israeli politics and hatred of Jews. 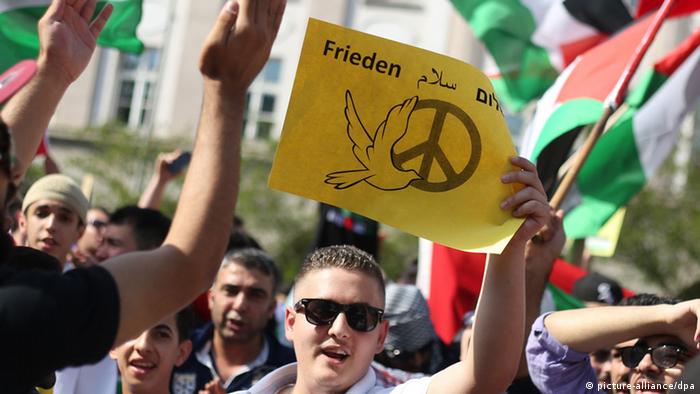 "Berlin police cower before Jew-haters," proclaimed a headline in the Berlin newspaper "Tagesspiegel" - and this line has been posted numerous times on social networking sites. It was reported that a group of Arabs shouted "Jew, Jew, cowardly pig, come out and fight alone" at a recent demonstration and police officers did not interfere.

In many European cities, what began as peaceful protests turned into outpourings of anti-Jewish sentiments and violence against counter-demonstrators. The situation became particularly heated in France, where street fights broke out between protestors and police in front of synagogues over the weekend. In Berlin, meanwhile, state security authorities have launched an investigation against a Muslim preacher from the Al-Nur mosque who posted a video on YouTube calling for murder of Jews.

Yakov Hadas-Handelsman, Israel's ambassador to Germany since 2012, has expressed indignation and concern over the incidents.

"We have nothing against demonstrations or against freedom of expression - that's the core of democracy," Hadas-Handelsman told DW in an interview. "But when, as happened this weekend, it leads to violence against the police or against pro-Israeli demonstrators, then it is unacceptable. I think Germans should be worried by that, because you also hear anti-Semitic slogans like 'Jews into the gas' - in Germany?"

He added that Germany needed to consider how to deal with anti-Jewish protests of this kind.

Politicians from nearly all German political parties have condemned the hostile displays. However, at this stage, the German government does not see a reason to raise alarm. According to a government spokesperson, everything is being done to protect Jewish institutions. 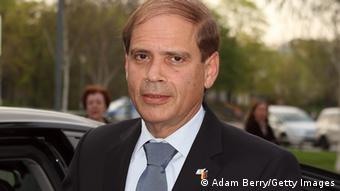 The Gaza conflict has stirred up public opinion in Europe, and it has brought Israel-hatred to Germany along with it, according to political scientist Stephan Grigat.

"You don't need great differentiation skills to be able to assert that this is straightforward anti-Semitism, in a drastic form that could also be found on the streets of Germany 70 years ago," said Grigat.

Grigat, who currently teaches at the Jewish Studies Institute at the University of Vienna, does not find the latest developments in Germany surprising. He pointed out that major demonstrations also took place during the confrontation between Israel and Hamas in 2012.

"However, in those years it was mostly people who identified with left-wing politics and who expressed harsh and often inappropriate criticism towards Israel," explained Grigat, adding that the current demonstrators are mostly members of Islamist groups. "Many of the participants openly express support for Hamas, Lebanon's Hezbollah or Islamic jihad."

From his perspective, there is a perfidious tactic behind the Islamists' campaign: "They use photos of dead civilians in Gaza to attach the 'Israel the child killer' image to their propaganda crusade in typical anti-Semitic fashion."

Another new factor in the latest protests is the "pronounced aggression" - and the fact that it is possible to mobilize several thousand people in a short time.

Different from other conflicts?

Grigat has also observed a growing anti-Israel stance in mainstream German society. And he finds that the term "Israel-criticism" alone reveals a lot about the negative sentiment. After all, he said, nobody speaks of "Japan-criticism" or "Sweden-criticism" when they do not approve of something the Japanese or Swedish government does.

"This expression shows what all this is really about: not reasonable criticism of individual decisions made by the Israeli government, but plain resentment of the existence of the Jewish state," said Grigat.

Whoever demonstrates in the street to show solidarity with the Palestinian victims should ask themselves why they don't do the same during other conflicts, added Grigat. "You really need to ask the question why 200 dead Palestinians are enough to send 10,000 people into the streets but nobody seems interested when 100,000 people are killed in Syria." 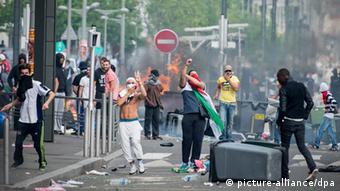 The anti-Israel demonstrations in France have been particularly violent

There is also a heated debate on social media sites about the concerns about dead and injured Palestinians. Many have observed, similarly to Grigat, that the Gaza crisis has been exploited by some for political purposes. One Twitter user wrote: "When I was against the war in Iraq, I shouted, 'Stop the war in Iraq.' If you are against the war in the Middle East, why are you calling 'Down with Israel'?"

But another Twitter user posed the question, "At what point can you call it genocide without being accused of anti-Semitism?" A third user said "I can very well oppose anti-Semitism during German protests and Israel's attacks against Gaza at the same time."

Rolf Verleger, a Jew and former board member of the Central Council of Jews in Germany, places most of the blame for the current mood on the Israeli government. In a recent interview on German radio, he pointed out that the Gaza Strip had come to resemble a giant prison and said it should be possible for a person to express criticism of Israel's Gaza policy without being branded an anti-Semite.

He also cannot understand it when German politicians are reluctant to criticize Israel based on German history. "What do my murdered ancestors have to do with the injustice perpetrated in the Middle East right now?" asked Verleger. "You can't just permit injustice to continue because of horrible things that happened in the past."

Many Germans see things the same way. In a recent survey by the "Stern" magazine, more than half of respondents place the blame for the conflict on both Israel and Hamas - and 86 percent believe that Germany should not publically stand on the Israeli side.

In the meantime, pro-Gaza demonstrations are set to continue in Germany and other European countries. They have a good chance of reaching a high point on Quds Day, which is used each year as an occasion for anti-Israel demonstrations around the world as it calls for the "liberation" of Jerusalem from "Zionist occupiers."

The only democracy in the Middle East is only fighting terrorists? The German media often paints a far too simple, one-sided picture of the Israeli-Palestinian conflict, says Loay Mudhoon. (19.07.2014)