The French government has pledged to crack down on anti-Semitism a day after a protest against Israel's offensive on Gaza descended into violence. The rally had gone ahead in defiance of a government ban. 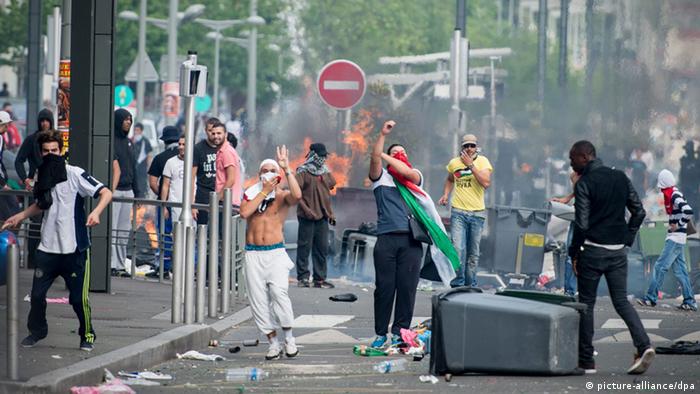 French Prime Minister Manuel Valls on Monday slammed what he described as "intolerable" acts of anti-Semitism after a pro-Palestinian demonstration turned violent in the Paris suburb of Sarcelles.

In the suburb, which has a large Jewish population, dozens of youths went on the rampage on Sunday, looting shops and setting a Kosher grocery store and some cars on fire. Non-Jewish targets were also among those hit. Police used tear gas and rubber bullets to try to bring the angry mob under control.

"Nothing can justify the violence," Valls said. "What happened in Sarcelles is intolerable: to attack a synagogue or a kosher grocery is simply anti-Semitism and racism."

"We have never seen such an outpouring of hatred and violence in Sarcelles," local mayor Francois Pupponi told the AFP news agency on Monday. "This morning people are stunned, and the Jewish community is afraid."

French Interior Minister Bernard Cazeneuve told reporters during a visit to Sarcelles that he would do everything in his power to prevent further violence from breaking out.

Sunday's demonstration, which took place in defiance of a ban on such demonstrations followed a similar unauthorized rally in Paris on Saturday to protest against Israel's current offensive in the Gaza Strip. There too,clashes broke out and dozens of people were arrested.

Some have criticized Cazeneuve's decision to ban the protests, saying the strategy has been counterproductive. Cazeneuve, though, said he stood by his decision, and would do the same if mosques or churches were under threat.

The deadliest violence, so far, of Israel's offensive claimed the lives of at least 100 Palestinians and 13 Israeli soldiers in Gaza on Sunday. Meanwhile, Hamas says it has kidnapped an Israeli soldier in Gaza City. (20.07.2014)