The grotesque, apocalyptic works of Dutch master Hieronymus Bosch have fascinated art lovers for more than 500 years. August 9 marks half a millennium since his death, and Madrid's Prado Museum is showcasing his work.

In what the Prado Museum has dubbed a unique and most likely unrepeatable show, the work of Dutch Renaissance master Hieronymus Bosch is on display in Madrid through September 11 to mark the 500th anniversary of the painter's death on August 9, 1516.

With its apocalyptic scenes depicting man's struggle against temptation alongside views of heaven and hell, Bosch's incredibly detailed work is known for his bizarre landscapes filled with surreal flying demons, distorted human figures and walking heads. 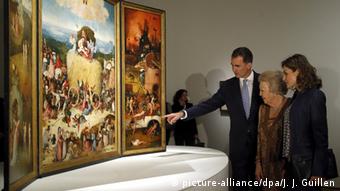 The Prado said when the exhibition, "Bosch: The 5th Centenary Exhibition," opened in late May that this is one of the few times that most of Bosch's work has been brought together under one roof.

A major show earlier this year in Bosch's hometown of 's-Hertogenbosch, in the Netherlands, also displayed many of his works, but was missing several key paintings like "The Garden of Earthly Delights," which belongs to the Prado.

The exposition shines a spotlight on Bosch's religious triptychs, including the "The Garden of Earthly Delights," ''The Haywain" and "The Temptations of Saint Anthony."

It includes 29 paintings and drawings, along with carvings and engravings, on loan from museums in Lisbon, Vienna, Paris, New York and Washington. They represent around 75 percent of his surviving works.

Spain's King Felipe VI opened the exhibition in May alongside the former Dutch queen, Princess Beatrix. Most of Bosch's works are in Spain, acquired by devoted Bosch fan King Felipe II in the Middle Ages.

Click through the gallery above for a closer look at the exhibition, "Bosch: The 5th Centenary Exhibition" and Hieronymus Bosch's work.

Hieronymus Bosch - Visions of a genius

Most of Bosch's famous paintings have been assembled for the exhibition in ’s-Hertogenbosch in the Netherlands. Not even in his own lifetime were so many pictures by Bosch exhibited together here. (23.02.2016)

Hieronymus Bosch, the return of a mysterious painter

Painter Hieronymus Bosch died 500 years ago in August, 1516. For an entire year, the painter’s home town 's-Hertogenbosch will be transformed into a stage for Bosch's surreal world spanning heaven and hell. (09.02.2016)

Just in time for the 500th anniversary celebrations of his death, a newly uncovered painting by Dutch master Hieronymus Bosch has been identified in a Kansas City, Missouri museum. (02.02.2016)