Just in time for the 500th anniversary celebrations of his death, a newly uncovered painting by Dutch master Hieronymus Bosch has been identified in a Kansas City, Missouri museum. 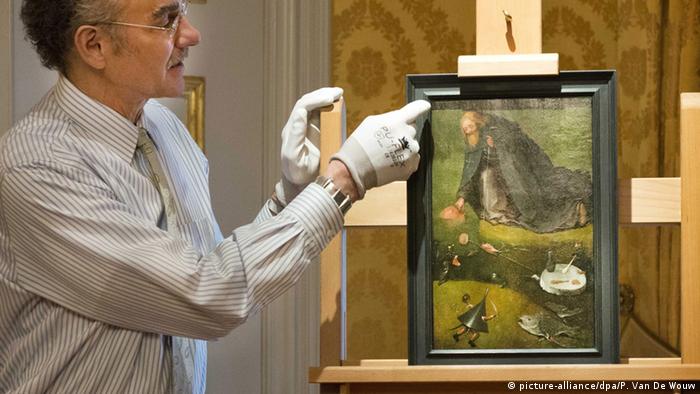 An international team of researchers spent five years using sophisticated infra-red technology to determine that the painting - entitled "The Temptation of Saint Anthony" - is indeed a work of the Dutch painter Hieronymus Bosch.

The discovery was unveiled on Monday (01.02.2016) in the Noordbrabants Museum in Bosch's hometown, 's-Hertogenbosch, in the Netherlands. Celebrations marking the 500th anniversary of his death are slated to kick off there on February 13.

The work, which was most likely created between 1500 and 1510, was previously believed to have been painted by Bosch's student. It "is a significant addition to the small body of existent work produced by Hieronymus Bosch," researchers said in a statement.

"Although the image was heavily retouched and over-painted during a 20th-century restoration, Bosch's hand is still clearly recognizable in the original brushwork," they added, pointing out the "little monsters" in the panel, typical of Bosch's style. He is widely known for his fantastic imagery, which sometimes ventures into the macabre.

The Nelson-Atkins Museum of Art in Kansas City, Missouri, acquired the painting in the 1930s. It remained forgotten in storage there for many years before the research began.

Chinese artist Ai Weiwei has recreated the most iconic image of the refugee crisis - the body of a Syrian toddler, washed up on a beach. While he says he's trying to raise awareness, not everyone finds it ethical. (01.02.2016)

How good are German architects, and how do their works change the face of German cities? The German Architecture Museum has the answer - and awards a prize to Berlin architect Bruno Fioretti Marquez. (01.02.2016)

Monet to Matisse in Royal Academy: Art in Transition

The most beautiful gardens of all times are the subject of a new art exhibition in London. From Claude Monet, the founding father of Impressionism, to Matisse, one of the most famous expressionists - all are on display. (29.01.2016)