Grief and anger in Asia over plane tragedy

Kuala Lumpur has demanded an international inquiry into the crash of a Malaysian Airlines plane allegedly shot down over eastern Ukraine. Nations in the Asia-Pacific are shocked at the tragedy. 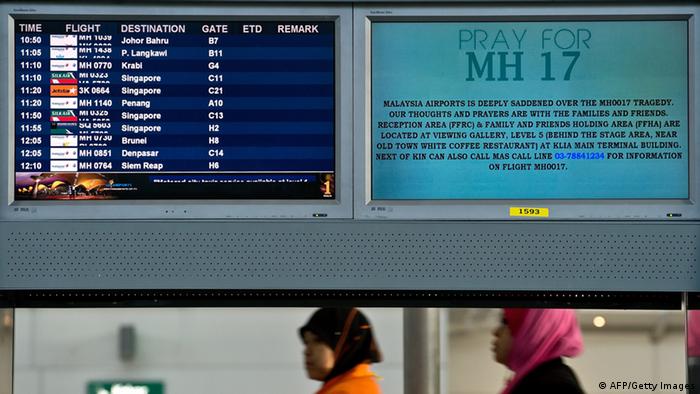 All 298 people on board Malaysia Airlines Flight MH17 en route to Kuala Lumpur from Amsterdam died when the aircraft crashed near the town of Shaktarsk in the Donetsk region on Thursday, July 17. The United States said it was not an accident and that the airliner was most likely downed by pro-Russia separatists active in the country's eastern and southern regions.

According to the Ukrainian officials, the plane was flying at 10,000 meters when it disappeared from the radar. 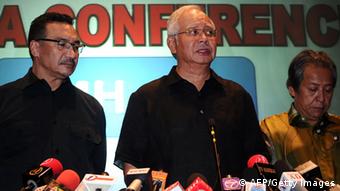 In a pres conference on Friday, July 18, Malaysian Prime Minister Mohammad Najib Tun Razak confirmed the Ukraine authorities also believed the aircraft had been shot down. Most passengers onboard MH17 were Dutch. There were also 43 Malaysians, 28 Australians, twelve Indonesians, nine British, four Germans, three Filipinos, one Canadian, and one Hong Konger.

Asian leaders have expressed deep shock and anger over the tragedy.

Accusations and speculation about MH17 abound

The plane was shot down over eastern Ukraine on Thursday. None of the almost 300 people on board seem to have survived. Ukrainian officials and separatists deny responsibility, but social media posts raise questions. (18.07.2014)

Struck by two disasters in less than five months, Malaysia's national airline is facing an unprecedented situation. With its image tainted, experts say the firm will have to reinvent itself to regain customer confidence. (18.07.2014)

An international investigation has been launched into the crash of Malaysia Airlines Flight MH17 in Eastern Ukraine. It is suspected the plane with 298 people on board was shot down by a missile. (18.07.2014)

'Commercial jets have no chance'

A missile attack is suspected in the crash of a passenger aircraft in eastern Ukraine. Until now, altitudes above 10,000 meters have been considered safe, aviation expert Heinrich Grossbongardt tells DW. (17.07.2014)

Indonesian President Susilo Bambang Yudhoyono said targeting a civilian aircraft with military weapons was a violation of international law and "even the laws of war."

"If the investigation proves that this is what did indeed happen, Indonesia hopes those responsible are sanctioned and handed a heavy punishment," Yudhoyono said in a televised press conference.

Australia also demanded a comprehensive investigation of the attack. Prime Minister Tony Abbott urged Russia - which is accused of supporting the separatists in eastern and southern Ukraine - to cooperate fully with any inquiry.

"As things stand this looks less like an accident than a crime," Abbott told the country's parliament following an emergency meeting of the government's national security committee. Abbott called the incident a "grim day for our country," and said national flags would be flown at half mast on Saturday on all government buildings as a mark of respect.

New Zealand's Foreign Minister Murray McCully also called for an international inquiry as he confirmed one citizen was on MH17. 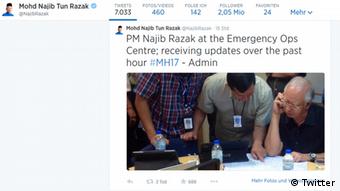 PM Razak rushed to the emergency center to monitor the situtation

There were scenes of mourning at Kuala Lumpur's international airport, as several relatives of those aboard the plane rushed to the authorities to inquire about their loved ones.

67-year-old Akmar Mohamad Noor told the news agency Associated Press that his sister, Rahimah, was coming down to Kuala Lumpur to visit the family for the first time in five years. "She called me just before she boarded the plane and said, 'See you soon,'" said a distraught Noor.

Rahimah was travelling to her home country for the Eid al-Fitr festival - Islam's biggest annual celebration marking the end of the fasting month of Ramadan.

"We were supposed to celebrate Raya [the festival] together," Noor said.

Siti Dina, whose daughter, son-in-law and three grandchildren were aboard the plane, said: "I heard about the news on the TV so I immediately came here to get more information."

Some people were infuriated with the Malaysia Airlines officials for not giving out complete information about the passengers.

"Is MAS stupid?" an angry man shouted, referring to the Malaysia Airlines System, the official name of the airline. "We just want to know the name list from the authorities." 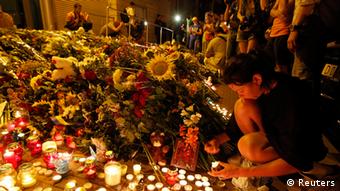 The man said his sister, brother-in-law and a two-year-old baby were believed to be on board.

"Facebook is more efficient than the MAS' media network," said another man at Kuala Lumpur's airport.

Madjin Rizari, a Malaysian student, told German news agency dpa that he had no doubt about who was behind the plane attack: "Those rebels have no heart," Rizari says, referring to pro-Russia separatists.

"It was an inhumane act," Lim Guan Eng, a top official from the northern Malaysian state of Penang said. "Justice should be served."