Accusations and speculation about MH17 abound | World | Breaking news and perspectives from around the globe | DW | 18.07.2014

Accusations and speculation about MH17 abound

The plane was shot down over eastern Ukraine on Thursday. None of the almost 300 people on board seem to have survived. Ukrainian officials and separatists deny responsibility, but social media posts raise questions. 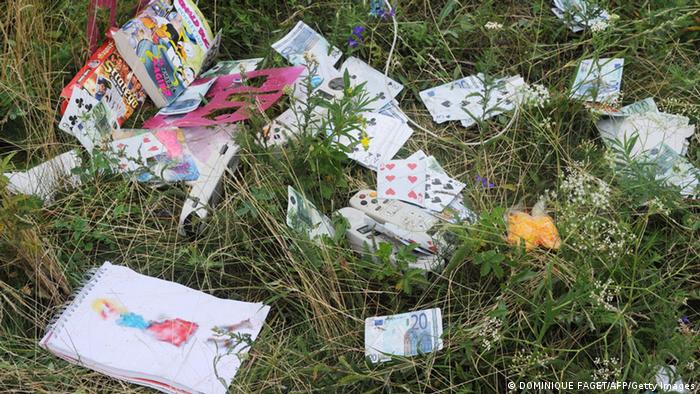 Hardly any facts are known yet about the crash of Malaysia Airlines flight MH17. What is certain is that the plane left Amsterdam for Kuala Lumpur at 12:15 p.m. local time on Thursday (17.07.2014). The airline lost contact with the plane four hours later. The aircraft went down near the eastern Ukrainian town of Shakhtersk, roughly 40 kilometers (25 miles) from the Russian border. All 298 people on board are assumed dead.

Precisely this lack of facts has created a fertile breeding ground for speculation. Ukrainian official Anton Gerashchenko said that the separatists in the eastern part of the country shot down the plane with a Buk missile launcher. The news agency Associated Press (AP) reported that its journalists saw what appeared to be a Buk missile launcher near the rebel-held town of Snizhne.

Investigative journalist Eliot Higgins from the platform bellingcat.com shared a video of what's supposed to be a missile launcher travelling through Snizhne.

The original video was quickly deleted from Youtube, but Higgins saved and reposted it. Based on geolocation done largely through crowdsourcing, Higgins said he was fairly certain that the road visible in the video is in fact in Snizhne, roughly 10 to 15 kilometers from the crash site.

According to media reports, rebel leader Igor Strelkov also posted and then deleted a status update about shooting down what he believed was a Ukrainian transport plane on Russia's Facebook equivalent VKontakte.

In the post, Stelkov claims no civilians were harmed.

For Malaysian and independent investigators of the crash, the black boxes are of vital importance in finding out what really happened. Peter Spiegel, Brussels bureau chief for the British newspaper "Financial Times," emphasized the significance of the flight recorder on Twitter.

Spiegel also had this heartbreaking explanation as to why the number of reported deaths increased overnight, before official figures were known:

Media report that around 80 children have died in the plane crash. Among the dead were Nick Norris (68) from the Australian city of Perth and his three grandchildren aged 12, 10 and 8. The majority of passengers on board were Dutch.

Ukraine's Security Service published a video which it claims is a phone conversation between separatists recorded just minutes after the crash of flight MH17.

However, the conversation's authenticity has not been independently confirmed. Separatist leader Alexander Borodai told Russia's state-run TV station Rossiya 24 that he believes Ukraine's government air force shot down the plane.

Malaysia Airlines was among numerous carriers that flew over Ukraine before the crash, even though the country is in the throes of violent conflict between the government in Kyiv and pro-Russian separatists who control provinces in eastern Ukraine.

Cost concerns are speculated as the reason for this.

The United States Federal Aviation Administration had warned US airlines against flying over the Crimean peninsula, which was annexed by Russia, in April. But there were no warnings about the area where the crash of MH17 occurred. After the downing of the plane, at least five airlines - among them Lufthansa and British Airways - said they would reroute their planes and avoid airspace over eastern Ukraine.

Meanwhile, stories about those who died in the plane crash have begun appearing online. The BBC reported that one of the flight attendants on MH17 had been married to another Malaysian airline employee who narrowly avoided disaster earlier this year: she was supposed to be on MH370, the flight that disappeared over the Indian Ocean in March 2014. She had pulled out of her shift at the last moment.

Many of the passengers were on their way to a major AIDS conference in Melbourne. Casualties include employees of the World Health Organization as well as HIV researchers like Dutch Joep Lange, who had been researching the virus for 30 years and was the father of five girls.

Twitter user Vikas Mishra shared a photo of the youngest crew member on MH17 to lose her life when the plane was shot down over Ukraine.

Grief and anger in Asia over plane tragedy

Kuala Lumpur has demanded an international inquiry into the crash of a Malaysian Airlines plane allegedly shot down over eastern Ukraine. Nations in the Asia-Pacific are shocked at the tragedy. (18.07.2014)

A Malaysia Airlines plane carrying 298 people has crashed in rebel-held eastern Ukraine in an apparent shooting down. Responsibility has been denied by rebels and Ukraine's Kyiv-based government. (17.07.2014)