The young climate activist has been recognized as the magazine's annual Person of the Year. The 16-year-old has torn into world leaders for the lack of action in the face of a climate crisis. 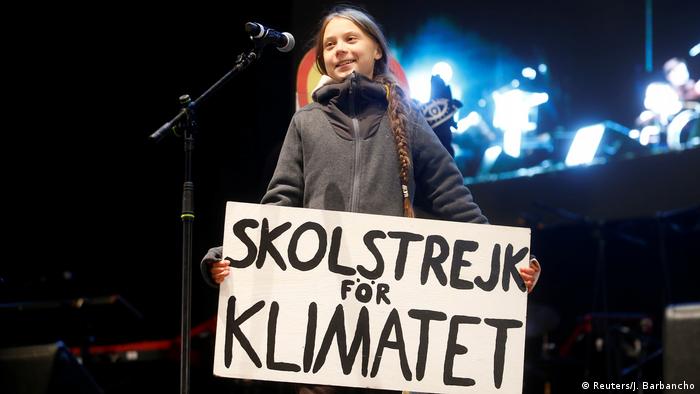 The 16-year-old is the figurehead of global climate change activism, urging governments to listen to scientists and take action against climate change.

What started as a solitary weekly school strike outside Swedish parliament morphed into a global campaign of weekly strikes to force governments to do something against the climate crisis.

Thunberg sailed across the Atlantic and back to attend the international COP 25 climate talks in a carbon-free manner after Chile canceled the summit and Spain agreed to host them instead.

The Swedish activist addressed the COP25 summit in Madrid on Wednesday, where she accused wealthier nations of inventing ways to avoid slashing their greenhouse gas emissions.

She said the annual conference had become an "opportunity for countries to negotiate loopholes and to avoid raising their ambition" to act on climate. "Countries are finding clever ways around having to take real action."

Read more: Greta Thunberg docks in Portugal ahead of COP25 in Madrid

Although negotiations are entering their final days, nations have encountered several sticking points in finalizing the rulebook of the 2015 landmark Paris climate accord, which aims to limit global temperature rises to "well below" two degrees Celsius and to a safer cap of 1.5C if possible

Countries have butted heads over how the fight against the climate crisis should be funded and how carbon trading schemes should be regulated. They have also failed to gain headway over how already-affected countries should be compensated for dealing with the effects of climate change.

"Recently a handful of rich countries pledged to reduce their emission of greenhouse gases by so and so many percent by this or that date, or to become climate neutral or net zero in so and so many years," Thunberg said in Madrid.

Time magazine praised her for inspiring millions of people to protest against climate inaction and facing the world's most powerful people.

"In the 16 months since, she has addressed heads of state at the U.N., met with the Pope, sparred with the President of the United States and inspired 4 million people to join the global climate strike on September 20, 2019, in what was the largest climate demonstration in human history," the magazine said.

"Margaret Atwood compared her to Joan of Arc. After noticing a hundredfold increase in its usage, lexicographers at Collins Dictionary named Thunberg’s pioneering idea, climate strike, the word of the year," Time said.

The magazine interviewed her as she sailed from the US to Portugal.

Greta on Wednesday said she was "a bit surprised" to be bestowed the title. She told the Associated Press that she wanted to dedicate the award to all young activists.

Time magazine has recognized journalists, including slain Saudi columnist Jamal Khashoggi, as its 2018 Person of the Year. Time said it was an effort to emphasize the importance of reporters' work in a hostile world. (11.12.2018)