The teen climate activist, a lawyer, a rainforest protector and a non-violent campaigner were honored at a Stockholm ceremony for the 40th annual Right Livelihood Awards. The prize is for advancing human rights. 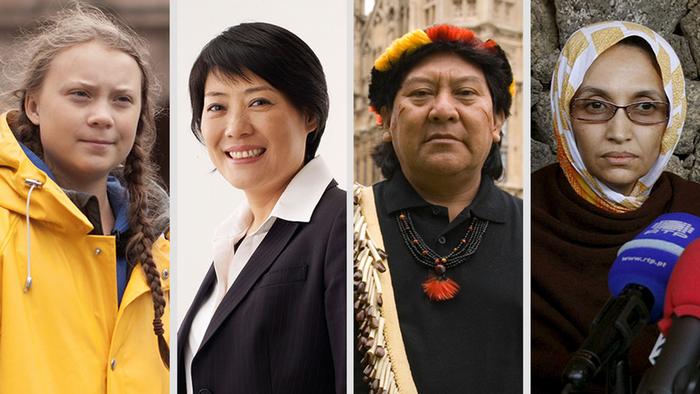 This year marks the 40th year the prize has been awarded. Two of the laureates, Thunberg and Guo, were not able to receive their awards in person, while laureates Haidar and Kopenawa were in attendance.

The jury honored 58-year-old Guo, a lawyer, for "her pioneering and persistent work in securing women's rights in China." The lawyer was integral in helping establish new laws against domestic violence in her country. 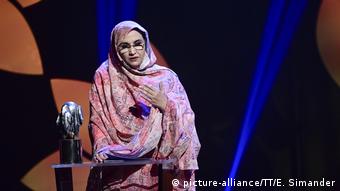 "She has helped thousands of disadvantaged women in getting access to justice," the award committee said.

Haidar, a 52-year-old human rights activist, was distinguished "for her steadfast non-violent action, despite imprisonment and torture, in pursuit of justice and self-determination for the people of Western Sahara."

Morocco annexed Western Sahara in 1975. The activist has campaigned for independence for more than 30 years and is known as the "Ghandi of Western Sahara" for commitment to non-violent protest. Brazilian indigenous activist Kopenawa was honored for his work protecting the Amazon rainforest. He was instrumental in achieving a protected status for a 96,000 square kilometers (37,000 square miles)  area belonging to an indigenous group in Brazil as well as for assisting various native groups to organize together.

In a video message played at the ceremony, she said, "The fight continues, and we will never stop."

A cash prize and metal from a gun

The Swede arrived in Lisbon this week after making a three-week voyage by sailboat across the Atlantic in order to attend the UN climate conference in Madrid. Thunberg refuses to fly due to the negative impact of air travel on the environment and therefore would have been unable to arrive in time for the ceremony.

Guo said last month that she would not be present at the ceremony, though the foundation did not say why. In the past, laureates have occasionally been unable to attend due to travel restrictions.

Each recipient was awarded a cash prize of 1 million Swedish kronor ($103,000; €95,000) and a statue made of metal recycled from gun destruction programs in Central America.

The human rights award was founded in 1980. Since then, 174 people from 70 different countries have been awarded the prize.