Greens in Hamburg end coalition with CDU | Germany | News and in-depth reporting from Berlin and beyond | DW | 28.11.2010

Germany's first coalition between the conservative CDU and the environmentalist Green party in Hamburg has failed. The Green party has called for new elections in 2011. 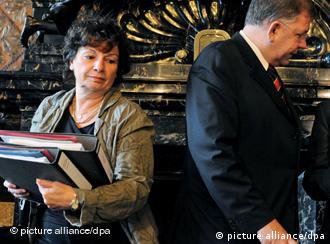 Christian Democrat Ahlhaus, right, took over as mayor in August

Germany's Green party has voted to end its coalition with Chancellor Angela Merkel's conservatives in Hamburg, and have called for new elections next year.

The environmentalist Greens said Sunday that their alliance with Merkel's Christian Democrats (CDU) has failed in the northern city-state. The CDU now faces losing control over another federal state. 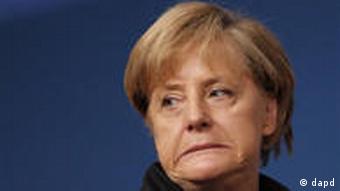 Merkel's support has dwindled in her second term

"We always said that we would not see out this coalition until the end of the term [in 2012] at all costs," said Jens Kerstan, the Greens' chairman in Hamburg, in a statement. "We no longer believe that the coalition has the strength to realize projects important for the future of Hamburg."

The collapse of the coalition will not be finalized until December 13, when a state conference has been called to discuss the issue.

Since winning a second term in the September 2009 elections with her coalition partner the Free Democratic Party (FDP), Merkel's government has seen support for her government dwindle. Controversial issues such as the recent decision to extend the lifespans of the country's nuclear reactors have pushed the party's popularity to about 34 percent.

Meanwhile, recent surveys show that public support for the Greens is now level with that of the chief opposition party, the Social Democrats, at 22 percent. 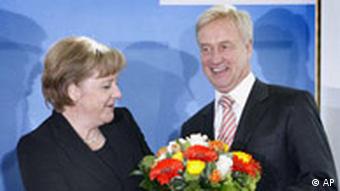 Von Beust was a popular mayor and friend of Merkel

An election in Hamburg next year would bring the number of state polls schedule for 2011 to seven. With their current surging support, a Hamburg election could see a coalition between the Greens and the Social Democrats, further eroding the CDU influence at a national level.

The CDU-Green coalition, the first such alliance between the two parties, was formed in 2008. At the time, it was seen as a possible model for a national coalition.

Last August, however, Mayor Ole von Beust, one of the key figures behind the Hamburg coalition and one of Merkel's closest personal allies, left politics and was replaced by the more conservative Christoph Ahlhaus.

Von Beust's departure, according to the Greens, made it even more difficult to reach agreement on divisive issues such as school reform and the dismal state of Hamburg's public finances.

On Sunday, Ahlhaus said he was "surprised and disappointed" to hear of the Greens' decision. Hans-Peter Friedrich, the head of the CSU, the CDU's Bavarian sister party, said the situation was "regrettable," adding that such an important economic region needed stability, not constant political upheaval.

In win for Merkel, Hamburg gets new conservative mayor

When Hamburg's mayor quit last month, it looked bad for the city-state's coalition government of conservative Christian Democrats and Greens. But their candidate was appointed mayor with surprising support on Wednesday. (25.08.2010)

Two months after taking office, Germany's new government is slipping in the polls. Voters are expressing dissatisfaction over the crisis in Ukraine and especially with Chancellor Olaf Scholz.